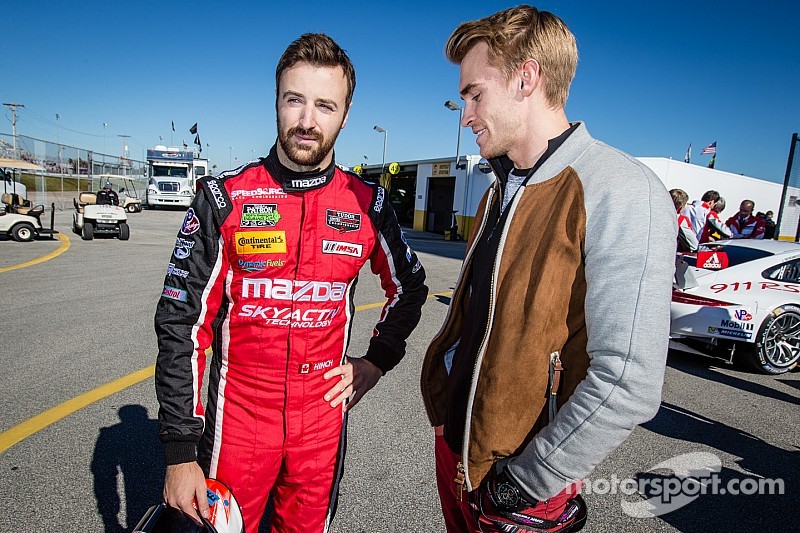 The IndyCar star will pilot the No. 70 Mazda SpeedSource prototype.

James Hinchcliffe is joining his friends at Mazda Motorsports, looking at a fourth attempt for an overall win in the Rolex 24 at Daytona next week. The new driver of Sam Schmidt’s No. 77 Honda/Dallara/Firestone entry in the Verizon IndyCar Series is a veteran of Mazda’s Road to Indy, having driven in the ladder system that financially encourages exceptional drivers at every step along the way.

This will be my fourth year in a row with Mazda ... I think that shows how I feel about them and the level of professionalism that they show

In his three previous starts on the 3.56-mile road/oval course at Daytona International Speedway, Hinchcliffe has driven for the factory team in the former GX, in GT and Prototype categories. This year’s activities with Mazda’s factory SpeedSource SKYACTIV diesel-powered Prototype squad places him in the No. 70 car with Tristan Nunez, Jonathan Bomarito and team owner Sylvain Tremblay.

Mazda has earned 23 class victories at the midwinter Rolex 24 at Daytona classic since 1975. Its second, No. 07 Prorotype entry features the talents of Tom Long, Joel Miller, Ben Devlin and Tremblay, who is splitting time in both cars.

“This will be my fourth year in a row with Mazda,” said Hinchcliffe, the fun-loving Mayor of Hinchtown and a native of Oakville, Ontario, Canada. “I think that shows how I feel about them and the level of professionalism that they show. It is a privilege and joy to get to drive for Mazda and it’s a partnership I hope we can keep going for many more years,” the three-time INDYCAR winner declared.

“Coming up through the Mazda Road to Indy, I have had a lot of experience driving different Mazda-powered machines. To see what they have done with that program and how they support the ladder system, not only in open-wheel racing but sports car racing and motorsports overall, it’s really, really cool to see,” Hinchcliffe continued.

Mazda Motorsports happy to have him back

His long-time friend John Doonan, director of Mazda Motorsports North America said, “James is a great example of what the Mazda driver development programs are all about. I’ve known him for many years through his climb up the Mazda Road to Indy ladder to become a winning driver in INDYCAR. He is a great young man who brings value to Mazda Motorsports on and off the track. We’re thrilled to have him with us again.”

Hinchcliffe closed by noting, “With SpeedSource and Sylvain (Tremblay, team owner) and all the guys, John [Doonan] has put together a real crack organization. It goes hand-in-hand with how they do it at every level of the sport.”

The Mazda factory SpeedSource team participated in last weekend’s Roar before the 24 test session at Daytona International Speedway, with both diesel-powered entries taking to the track on Friday and Saturday. With rain through much of the day Sunday the team elected to return to its south Florida base to prepare for next weekend’s big race. Hinchcliffe did not take part in the two-day exercise.