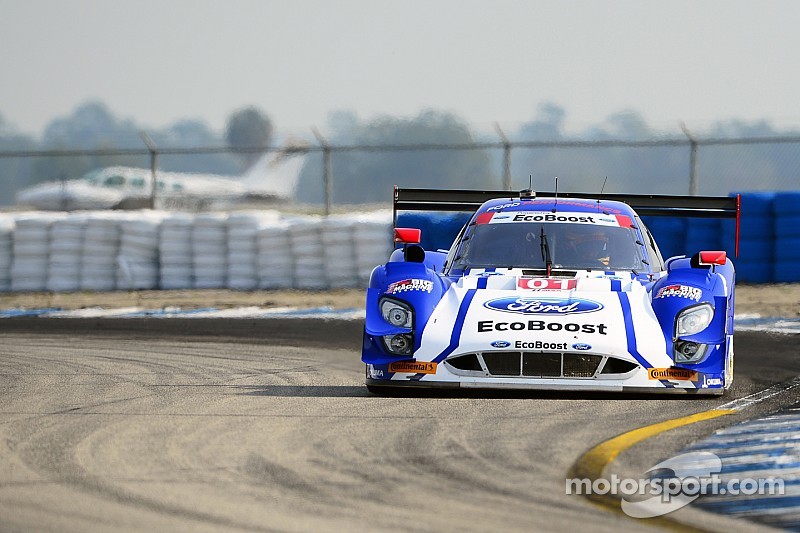 The following is what took place between the fourth and sixth hours of the race.

Sebring, Fla. - We have reached the halfway point of the 63rd running of the 12 hour endurance racing classic at Sebring.

Things have not gone the way of Krohn Racing today. They dominated practice, won the pole, led early, then got caught up in a pit road collision which has cost them four laps repairing nose damage and replacing the muffler.

The No. 3 Corvette got lucky when a spin that resulting in nose-to-wall contact didn't hurt the car any, which has worked its way back to third in GTLM with Jan Magnussen at the wheel.

Both the TRG-Aston and the No. 70 Mazda had brief offs. The No. 85 also spun into the grass but after a few moments, the PC was able to pull itself back onto the circuit.

It has been a nightmare weekend for the Mazda team with both cars way off their rivals. Since our last report, the No. 07 returned to the race after a fuel leak and the sister No. 70 has retired with a drivebelt failure. The DeltaWing has also officially retired with the team saying, "The team is working hard on the rear suspension, but it's too risky to continue here. We will fight another day."

No. 1 ESM and No. 31 Action Express prototypes fall back

After leading the first portion of the race prior to Negri's crash, the ESM No. 1 car has lost two laps to the leaders due to issues with the ECU.

The battle for supremacy among the DPs really heated up when Papis (No. 31 Action Express) and Valiante (No. 90 VisitFlorida.com) Corvettes started fighting over second. Papis had a major lock-up trying not to slam into the back of the No. 90. We never got to see the end result of the battle though with the No. 31 bringing out the fourth full-course caution due a loose wheel that ended up coming off (after he slowed down thankfully).

Through a cycle of stops, the No. 90 ended up out front but Christian Fittipaldi ended their reign, overtaking the fellow Corvette after harassing him for a handful of laps.

RSR Racing's strong run in PC came to a sudden end with a broken gearbox sending the second place car behind the wall.

Both the No. 25 Team RLL BMW GTLM and No. 44 Magnus Racing GTD Porsche (contact with a Ferrari) have lost quite a bit of time due to suspension failures.

The fifth time the entire course was placed under yellow came just before we hit the halfway point when the No. 16 PC had yet another issue, spinning and backing up into a tire barrier.

Due to the caution and the stops that followed, the No. 01 Chip Ganassi Racing Ford-Riley of Scott Dixon is being scored as the leader, their first time out front today in what has been a fairly quiet race for the team. The No. 5 Action Express Corvette runs second and the No. 90 is back to third.

The No. 52 Mathiasen Motorsports ORECA team are doing a good job in an effort to back up their surprise Rolex 24 win, running fifth overall and leading the PC class.  The No. 38 Performance Tech Motorsports and No. 54 CORE Autosport prototypes follow.

In GTLM, as stated before, Porsche has a stranglehold at the top with the factory 911 and and No. 17 Falken entry. Corvette's No. 3 is on the same lap in third.

GTD is also held by a couple Porsches, both owned by Alex Job Racing with the No. 22 ahead of the No. 23. The Viper that burned here last year runs third, also on the same lap as the two Porsches the Riley team is chasing.