Boris Said and Eric Curran have a new team mate for Sebring.

After racing to the finish in the team’s first-ever Prototype race with a 10th place result in the 2014 Rolex 24 At Daytona, Whelen Motorsports will look to build on that start with a strong finish in Saturday’s Mobil 1 Twelve Hours of Sebring Fueled by Fresh From Florida.

The team, which closed out the GRAND-AM era with a big Rolex GT victory in the 2013 season finale race at Lime Rock Park, has signed Guy Cosmo to the driver line up to share the driving duties in the fabled red and white No. 31 Whelen Motorsports Corvette DP with Boris Said and Eric Curran. Whelen Motorsports racer Max Papis will not be able to make the Sebring weekend due to a scheduling conflict.

Cosmo has nearly a decade of Daytona Prototype experience under his belt, including his role in the early development of the Coyote Chassis that underpins the No. 31 Whelen Motorsports Corvette DP. The Florida resident opened the 2014 IMSA TUDOR United SportsCar Championship season behind the wheel of a GTD Ferrari, bringing home a sixth place finish in the Rolex 24 At Daytona. The versatile Cosmo raced an LMP2 machine in the 2013 Sebring Twelve Hour event, but suffered mechanical issues early in the race. 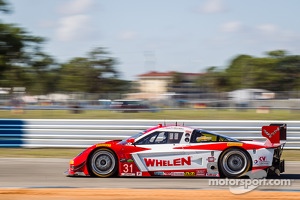 With recent experience in GTD competition as well as having raced both Daytona Prototype and LMP machinery, Cosmo will have a well-developed perspective as he takes on the big traffic that is sure to be a constant on the 3.74-mile circuit next Saturday.

“I’m thrilled to be back behind the wheel of a Prototype and to be racing in the 12 Hour,” said Cosmo. “Ted (Marsh) has always put a great effort behind anything he races and I think the team did a great job to keep fighting to the finish at Daytona. Eric (Curran) and Boris (Said) are great guys and I’m happy to be part of such a strong line up. Sebring is a tough track and with nearly 70 cars, this is going to be a very tough race. But the team learned a lot at the test and hopefully we can be there for the finish.”

Opening practice for the 62nd Running of the Mobil 1 Twelve Hours of Sebring is set for Thursday at 9:55 AM, with live timing and updates available at www.imsa.com. The race will be broadcast LIVE on Fox Sports 1 starting at 10 AM on Saturday March 15, with www.imsa.com broadcasting the final 9 hours of the race live.