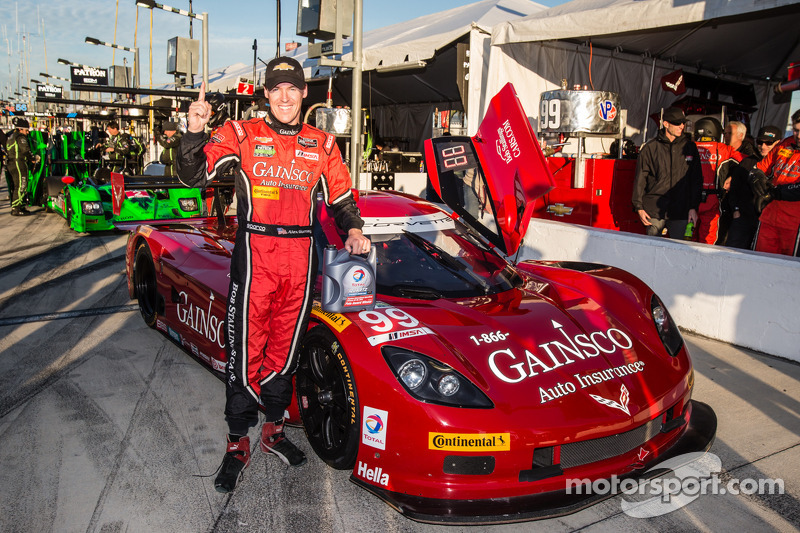 “I’m really happy and pretty excited about it all,” explained Gurney, the 2007 Rolex 24 pole sitter. “We had a difficult off-season. This means a lot to all of us and our team. We’re not set for the whole season. So this is one of our times to shine.”

Gurney and the Bob Stallings team currently only have funding to contest five races in 2014.

During pre-race testing Gurney’s team concentrated on running laps with a full fuel tank rather than trying to set the fastest lap times. “We never really went low-fuel and showed what we had. When we took the fuel out, we went fast.”

Katherine Legge was eighth in the Delta Wing and Lucas Luhr was the fastest P2 car, qualifying 11th, more than a second and a half behind Gurney. The best Honda HPD ARX-03b could manage no better than 16th, over three and a half seconds behind the pole sitter.

Seemingly a little surprised by the speed differential, Gurney expects the P2 cars to make up for a potential lack of speed during the race with better fuel mileage and an ability to run two stints on their tires. DPs have a difficult time running more than one stint on a set of tires and they consume more fuel per lap under the series’ new rules. 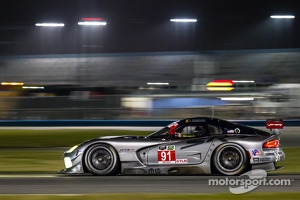 CORE Autosport’s Colin Braun nabbed the Prototype Challenge pole in a time of 1:41.777. “It’s really cool to be on pole her at Daytona,” explained Braun, who now has 10 sports car poles to his credit. “But as soon as the green flag drops, everybody forgets it. We have to enjoy it while we can.”

In the GT Le Mans class, the factory-backed SRT Viper GTSR’s ended up first and third during qualifying. Marc Goosens set the fastest time (1:44.506), .076 seconds ahead of Nick Tandy’s factory Porsche 911 RSR and .111 seconds quicker than the second Viper of Jonathan Bomarito.

“It’s not the most important thing to be on the pole at Daytona, but it obviously helps,” said Goosens.

The factory Dodge Vipers have returned to the Rolex 24 for the first time since taking the overall win in 2000.

The fastest new Corvette C.7R was fourth in class in the hands of Oliver Gavin, two spots ahead of the quickest Aston Martin Vantage V8, driven by Darren Turner. The two Rahal Letterman BMW Z4 GTE’s were seventh and eighth.

Christopher Haase set the fastest time in the GT Daytona class behind the wheel of the Paul Miller Racing Audi R8 LMS. “It was a really great qualifying,” said Haase.

“We worked quite a lot on the car (during practice). We improved step-by-step the car’s setup. And for qualifying we were a bit more aggressive. And for sure that was the right way.”

Toni Vilander was second quickest in the Scuderia Corsa Ferrari 458 Italia, followed by the Fall-Line Motorsports Audi R8 LMS of Oliver Jarvis. The top-20 cars in the class all qualified within a second of Haase.

Thursday Notes Saturday’s 52nd edition of the Rolex 24 at Daytona will mark the first race for the new United SportsCar Championship, a combination of the Grand-Am Rolex Sports Car Series and the American Le Mans Series. Those series raced independently from 1997 until 2013. Sixty-seven cars are entered in the race, including 18 prototypes, nine Prototype Challenge cars, 11 GT Le Mans cars, and 29 GT Daytona cars.

All cars in the Prototype, Prototype Challenge, and GT Daytona classes will race on Continental tires. All of the GT Le Mans cars will race on Michelin tires.

The race will mark Ferrari North America’s 60th year of racing at Daytona. There are eight Ferraris entered in the GT Daytona class and two in the GT Le Mans class.

The brand-new Corvette C7.R will make its debut in the Rolex 24. The car and the Z06 road car share the same production-based aluminum frame. Corvette Racing won the Rolex 24 overall in 2001.