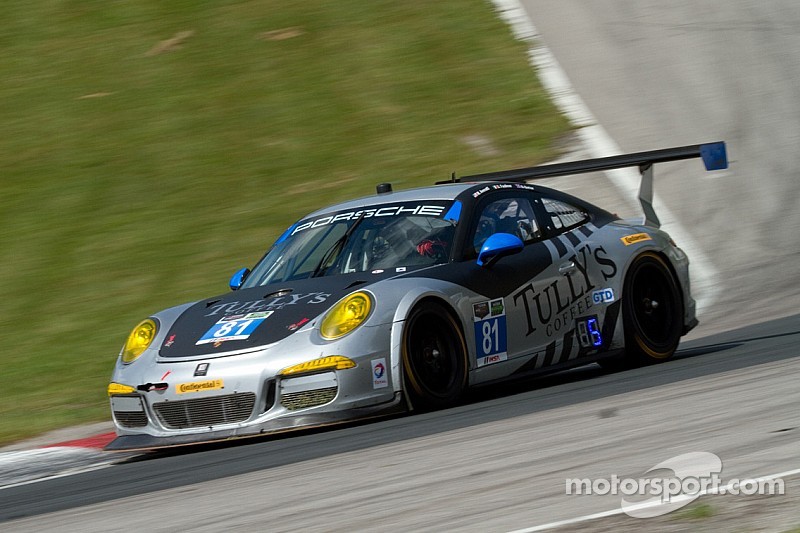 Austin, Texas – After a brief break in racing action, GB Autosport is ready to put its No. 81 Tully’s Porsche 911 GT America back to work at Circuit of the Americas this Saturday (FOX Sports 2, Saturday September 20 12:30 PM ET).

As the penultimate round of the IMSA TUDOR United SportsCar Championship, the team looks to complete its debut season in strong form. Drivers Damien Faulkner and Ben Barker will again share the driving duties of the No. 81 Tully’s machine as the pair takes on the challenging Texas track.

GB Autosport added another top-10 finish to the record books in the previous round of competition at Team Manager Cole Scrogham’s home track, Virginia International Raceway. It was a successful outing that also saw the No. 81 Tully’s Porsche lead laps for the first time this season, further exemplifying the upward progression GB Autosport has made since its race debut at Daytona back in January.

Heading south to Austin, Texas, the team carries confidence after continuing to show improvement and increased strength, round after round, in its debut season of IMSA competition. Faulkner arrives with the extra dose of confidence that comes naturally after having taken an ALMS victory in a Porsche at the 3.4-mile road course last year.

“I really like the track,” said Faulkner of Circuit of the Americas. “And of course it doesn’t hurt that I won there last year. As this is still just GB’s first season, we have been constantly learning and growing the whole year and with just two races left, we are all feeling really positive and ready to have everything sort of come together so we can get the great result we all know we are capable of.”

Barker’s experience with GB Autosport this season marked his first time racing in the United States, and he quickly showed himself capable of getting up to speed in a Porsche regardless of his surroundings in his first TUDOR Championship race at Detroit. He has been an asset to the team ever since, combining with Faulkner to score their season-best result of fourth at Canadian Tire Motorsport Park.

For this weekend’s 2.75-hour race, he will benefit from Faulkner’s experience and coaching as he prepares to quickly learn the circuit and deliver another positive result for the team.

For the Lone Star Le Mans event, the team will have three practices ahead of qualifications on Friday at 5:30 PM (ET).