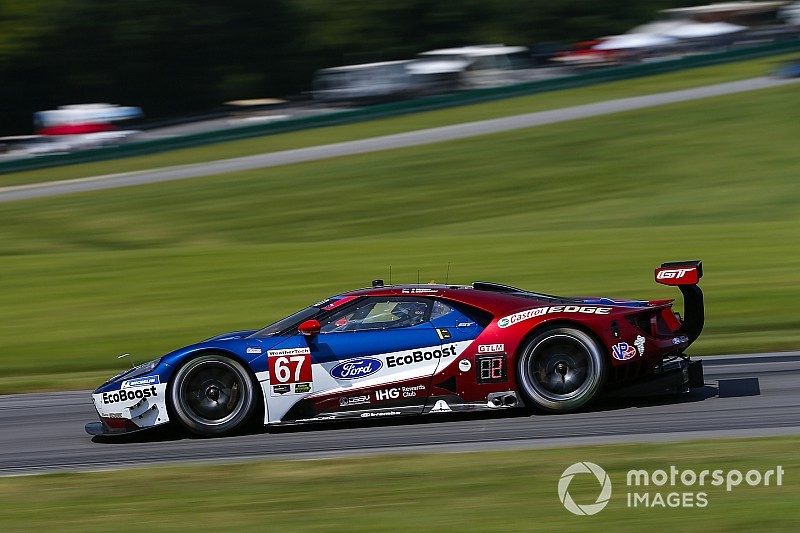 Rain during the previous GTD qualifying session meant all GTLM cars started the session on wet tyres, but the majority of the circuit was completely dry – such was the localised nature of the shower that completely soaked the start/finish straight and opening corners.

BMW’s Connor de Phillippi set the benchmark time at 2m00.150s before a quick off at Turn 3, as the drivers balanced pushing in the wet sector while trying not to ruin their wet tires on the longer dry section.

Westbrook then went a second faster, as the track dried out quickly towards the closing moments of the session, lapping in 1m55.580s in the #67 Ford GT. Nobody could beat his time.

“It was great fun,” said Westbrook. “We sat there for a bit, I wanted to go [for] slicks, and I think it did dry out so much in the end, but because we hadn’t been pounding around, our wets were still in good shape at the end.”

The points leader added: “I’m gonna say this is an important pole at this stage of the season.”

Edwards improved to 1m56.185s, but was pipped for second by Patrick Pilet on the final lap in the #911 Porsche.

Edwards will start third, ahead of Antonio Garcia in the leading Chevrolet Corvette. De Phillippi dropped to fifth, from Joey Hand’s Ford, Tom Milner’s Corvette and Earl Bamber’s Porsche. Bamber went off in the #912 at Turn 3 early on, and then spun at the final corner on his last lap.

In GT Daytona, pole position went to Jack Hawksworth in the #15 Lexus RC F with a lap of 1m44.107s, bouncing back after a disastrous time in the previous round at Road America. He was 0.216s faster than Jeroen Bleekemolen’s Riley-run Mercedes, in a session that was effectively decided early as the rain fell midway through.

“Road America was a cruel weekend all around, so to come back from that with pole is great,” said Hawksworth. “So far this weekend the car’s been working well. It started to sprinkle at the start of the session, so I pushed early, and then it started raining properly halfway around my next lap.”

Bill Auberlen was third fastest in the Turner Motorsports BMW M6, ahead of the second Lexus of Kyle Marcelli. Madison Snow was fifth quickest in the points-leading Lamborghini Huracan, which has already undergone an engine change this weekend.

Patrick Long set some rapid sector times in the Wright Motorsports Porsche 911 that won last time out, but a spin proved costly, as rain began to fall and sent everyone scurrying to the pits before the end of the session.

Although the GTD times were over 10s quicker than the GTLM cars, they will start behind them as per the series rules.

Order below is by overall times, not starting positions.