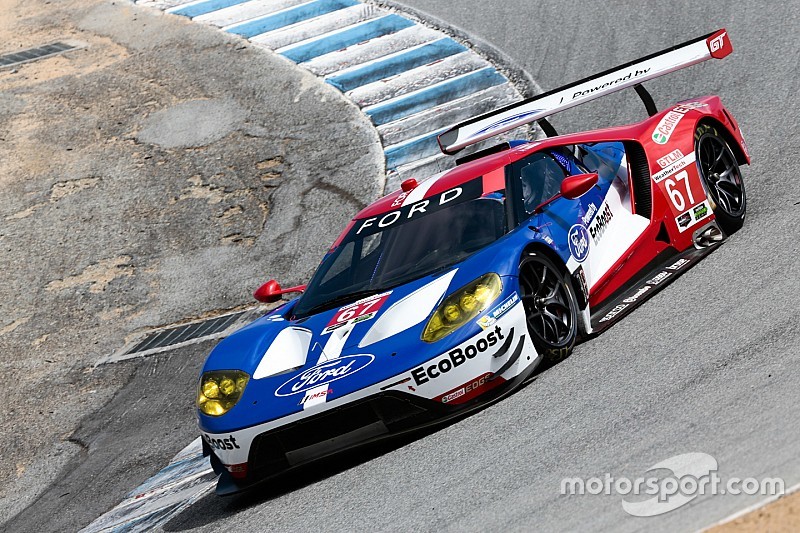 Michael Shank Racing shook off its bad luck with a comprehensive win at Mazda Raceway Laguna Seca, while a Chip Ganassi Racing Ford GT took the GTLM laurels through a combination of pace and fuel economy.

On a weekend when Mazda Prototypes dominated at the Mazda-owned track, it was a cruel blow for the company to see an easy 1-2 dwindle to a distant fourth place finish, and for a Honda-powered car to cross the line first.

But John Pew did a sterling job in the early stint of the race, and when Oswaldo Negri hit clean air at the front, he soaked up everything the Mazdas could throw at him, before their challenge faded. He would cross the line half a minute clear of an entertaining dice between the VisitFlorida.com Corvette Daytona Prototype of Marc Goossens/Ryan Dalziel which had come from the back of the grid, and the similar Action Express Racing machine of Eric Curran/Dane Cameron.

The #70 Mazda of Tom Long and Joel Miller died just before the halfway point in the two-hour race with apparent electrical failure, while #55 of polesitter Tristan Nunez and Jonathan Bomarito led for the first stint, but suffered a long pitstop as the fuel hose wouldn’t engage.

Bomarito made a great job of recovering from that, and swiftly went from sixth to second, but once he caught Negri, he made a rare error, dropping a wheel on an inside curb at Turn 10 and spinning on lap 45.

He got the car going and immediately pitted for more fuel, but he had lost some 21 seconds, and with beaten up tires, he drove conservatively for the remainder of the race, beating the DeltaWing of Katherine Legge and Sean Rayhall by five seconds.

Bomarito was not the only Prototype driver to screw up Turn 10. The two Daytona Prototypes that looked strongest in the early stages of the race were the Action Express #5 of Christian Fittipaldi and the #10 Wayne Taylor Racing entry driven by Ricky Taylor. However, after 30 minutes, Taylor spied a chance to grab what was then third place from Fittipaldi at Turn 9 and muscled past. When Fittipaldi tried to respond down the inside of T10, he lost the rear under braking, which swung out and knocked the WTR machine into the sand.

Jordan Taylor got the #10 back up to sixth in class, albeit two laps down on the winner, while Joao Barbosa brought the #5 DP home seventh, a further two laps back.

The two Ganassi Ford GTs held onto their impressive 2-3 qualifying position at the start of the race, and never let Daniel Serra’s Scuderia Corsa Ferrari 488 GTE escape. At this stage, the Ryan Briscoe/Richard Westbrook car was ahead of the Joey Hand/Dirk Muller machine, the latter pursued by the Risi Competizione Ferrari of Toni Vilander/Giancarlo Fisichella.

This quartet swiftly pulled a two-second gap over the squabbling Corvettes and Porsche 911s, following the first round of pitstops, where the Fords fell back to sixth and seventh briefly, as their rivals went longer on the first stint. But when Fisichella pitted from the lead of the class on lap 44, the Fords assumed a 1-2 position – Hand ahead of Westbrook – which they held almost for the entire remainder of the race, four seconds apart.

Then with 14mins to go, Hand suddenly backed off allowing his teammate in front, but still 15sec clear of the #3 Corvette which was also trying to make it on only one stop.

However, with 6mins to go, Hand felt obliged to duck in for a splash ’n’ dash – as did Antonio Garcia in the ’Vette. So soft-pedaling to the flag by Westbrook saw him earn a 12sec victory over the polesitting Serra/Alessandro Pier Guidi-driven Ferrari and the #912 Porsche of Earl Bamber and Frederic Makowiecki.

Bamber earned few friends on the opening lap, running teammate Nick Tandy off the road and hip-checking Dirk Werner’s BMW M6. But in terms of pace, Bamber and Makowiecki did well to earn a result that the 911 did not look capable of delivering on this day, beating Garcia, Fisichella and Hand past the checkered flag.

DeltaWing qualifies in a solid sixth