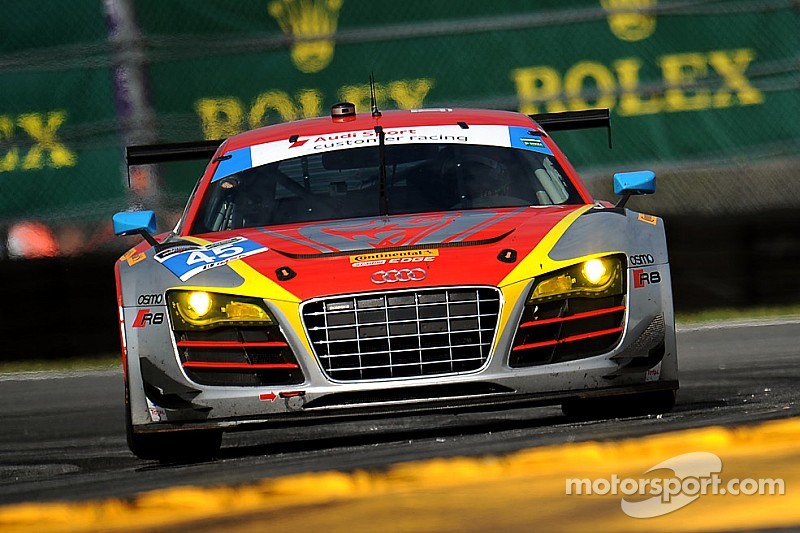 The team qualified the #45 Audi R8 LMS in the 6th position in the GTD class of the TUDOR United SportsCar Championship.

After a near miss in the 2014 Rolex 24 at Daytona, Flying Lizard Motorsports returned to Daytona International Speedway in 2015 with an even stronger desire to claim the top step at the legendary endurance event.

The team qualified the #45 Audi R8 LMS in the 6th position in the GTD class of the TUDOR United SportsCar Championship. Audi Factory driver Markus Winkelhock started the race and enjoyed a clean opening stint, but trouble found the team only one hour into the 24 hour long event.

Clutch issues forced the team to immediately take its R8 LMS to the garage, where the Lizard crew worked quickly and methodically to conduct repairs. In just 35 laps, the team removed the transmission and replaced the clutch. They rejoined the race in less than an hour at the back of the GTD field. Never losing determination to fight for a positive result, the team pressed on as the hours passed, taking advantage of every caution period in which they could regain lost laps.

With the car repaired, the Flying Lizard Audi kept pace with the leaders of the GTD class for the remaining 22 hours without issue. Ultimately the team finished 10th in class after a flawless race by drivers and crew.

"I'm really proud of the result we produced in our first race of the 2015 season," said Program Manager Darren Law. "We had a phenomenal run. Aside from the mechanical issue in the first hour of racing, which put us down several laps, we had a trouble free run. This is such a prestigious race with a lot of history. Just finishing is an accomplishment and to finish without any damage or on track incidents says a lot about our drivers. If we didn't have the initial issue, I believe we would have been right there at the end fighting for the podium. Everyone worked well together all weekend, as you would expect from our Flying Lizard Audi team and to come from last to finish with a top ten is great."

Flying Lizard will now refocus on building the remainder of its 2015 TUDOR United SportsCar Championship program and will announce its participation in additional 2015 IMSA races at a later date.

Markus Winkelhock: "It was a tough race. I did the first stint of the race and I was struggling a little bit of oversteer. I guess it probably came because of the rain during the night before the race and the green track conditions at the start. But the track changed quite a bit and the balance came back and the car was getting better and better. I felt confident in the car, and we hadn't had a problem with it all weekend, but unfortunately we had a problem at the end of the first hour and we dropped back 35 laps. So the race was gone after one hour, and it was not easy to keep up the motivation for the rest of the race. The team did a great job. We had no issues besides the clutch for the whole race. The balance was really good at the end. It was a pleasure to drive for the Flying Lizards and I hope to join them again soon."

Robert Thorne: "Overall, it was a bit of a struggle the past 24 hours. We had a real uphill battle after our issues in the first 60 minutes. We stayed out there and felt good in the car and put down some fast laps. Audi brings a great package, and it was strong and durable. We had a car or two bounce off of us but had no issues. Even at the end of the race the #45 was as good as it was in the beginning. A big thanks to the team, I'm happy to be on board."

Tomonobu Fujii: "First of all, I would like to say Thank you so much for such a great job to Flying Lizard Motorsports, Audi, Audi Sport Customer Racing and all of the race fans. It was very challenging as it was my first Rolex 24 Hours of Daytona, one of the most difficult races in sports car racing. Even so, it was a very exciting and an amazing experience. Unfortunately, we lost some laps in the beginning, but we never gave up. We focused on our own performance, and the team gave us a great strategy to the end. The Audi R8 LMS showed a strong performance and was very consistent throughout the race, which is always a very tough one on cars. I hope to be back next year again in Daytona for this fantastic event!"