Flying Lizard completes successful test at the Roar before 24 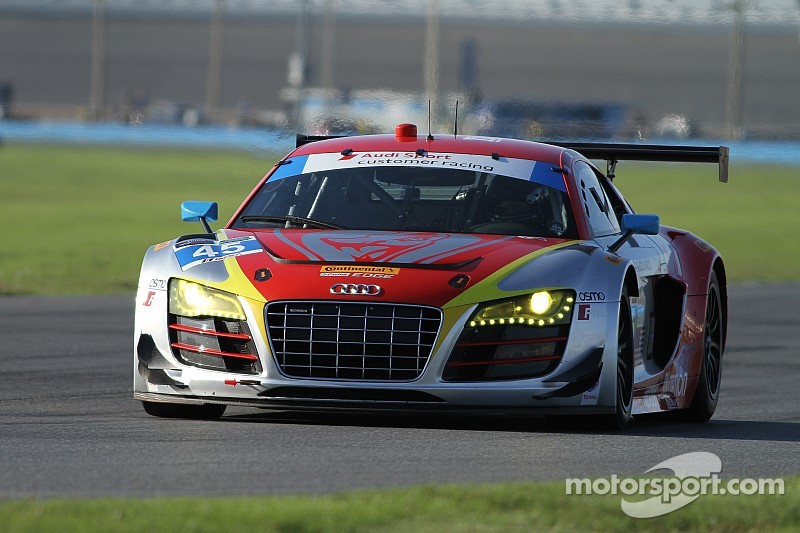 This week at Daytona International Speedway, Flying Lizard Motorsports conducted their first laps of the season on track at the TUDOR United SportsCar Championship's official test, the Roar Before the 24.

The team returned to the 3.56 mile, 12 turn road course with the Audi R8 LMS, with which the team celebrated a second place finish for the 24 hour endurance event in 2014. Flying Lizard drivers Tomonobu Fujii (Japan), Satoshi Hoshino (Japan), Robert Thorne (United States), and Markus Winkelhock (Germany), completed a total of 187 laps during the three days, roughly 28% of the GTD class lap count for last year's event.

Although both Tomonobu and Satoshi have vast endurance racing resumes, the Roar Before the 24 test marked their first visit to Daytona International Raceway. The two Japanese drivers quickly adapted to the track and proved to show speeds matching Winkelhock and Thorne.

We left here with a quick car, with consistent drivers, and I feel very good about coming back to the race.

Six of the eight sessions were held under clear conditions, but the skies opened for the seventh test session of the week. Each of the four Flying Lizard Motorsports drivers ran strong laps in dry and wet conditions, landing in second place in Saturday night's session under the lights of the speedway.

Weather conditions throughout Sunday afternoon prompted the team to end their test early, satisfied with the overall progress from the completed sessions. Driver-turned-Program Manager Darren Law spent his first event in his new role, contributing his experience and expertise to both the drivers and management teams.

"Overall I think we had a really good weekend," said Law. "It was my first time coming in back with the team in a different role, but it was a great transition because I knew everybody here already and I know the industry so I'm really enjoying the new role with Flying Lizard. As far as the car and the drivers, it was an excellent test. The car was quick, and of course, this is a very well established season program that has done this race many times. We left here with a quick car, with consistent drivers, and I feel very good about coming back to the race."

The first practice sessions of the 2015 Rolex 24 Hours of Daytona will begin January 22nd, with the race beginning Saturday, January 24th at 2:30pm. The television broadcast will begin at 2:00pm Eastern on FOX.

Tomonobu Fujii: I would like to extend a big thank you to the team, Flying Lizard Motorsports, and to my teammates Markus (Winkelhock), Robert (Thorne), and Hoshino. They have all done such a great job and worked hard this week at the test. The team has put together a fast car that I feel confident in. I'm very familiar with the Audi R8 LMS from my experience in Super GT, and this car was fantastic. The car has great speed, braking, and handles very well. It had good grip on the track and is easy to drive.

This is my first time running here in the United States and I am really enjoying being at Daytona International Speedway. I'm glad we were able to run in both wet and dry conditions so that I could be more prepared for what may come at us during the race at the end of the month.

I already have experience running 24 hour endurance races in Japan and Dubai, so I'm looking forward to applying that knowledge to this experience. We will continue to keep focused in order to be at the top of the podium in our Audi R8 LMS at the Rolex 24 at Daytona.

Satoshi Hoshino: It is a great pleasure to drive at a historic and prestigious track like Daytona International Speedway for the Rolex 24 at Daytona. This has been such a great experience to be testing here for the past three days. After having 3 full days of driving on track, I feel very confident about coming back for the event next week.

I will do my best during the race to contribute to the team to help them get the results we deserve. I'm excited to be racing with these drivers and I cannot wait to be back here in the Audi R8 LMS in two weeks and go for the win at the Rolex 24 Hour at Daytona.

Robert Thorne: The test went really well. I had a really great experience to work with Flying Lizard Motorsports and get behind the wheel of the Audi R8 LMS, as well as have Audi here and the factory support and the factory drivers. It was an overwhelmingly awesome experience. We had some good times and made some improvements on the car.

I feel very successful and confident going into the 24 now, a lot more so than before the test. Markus is a very quick driver and great to work with. Fujii and Hoshino are very friendly and I think between the four of us I think we have a very fast winning combination. I'm looking forward to the 24 and hoping we can get a win on the board.

Markus Winkelhock: I'm absolutely happy with the test. The car was good, and team was good as always. I feel confident in the car on the track. I think we've got a good driver line-up for the race. I've done seven 24 Hours with the Audi R8 LMS and I've never had a technical issue so I think we have a really reliable car for the race.

As I said, the car is well prepared from the Lizards. I think we have a good chance to be on top of the podium at the end of the race. This must be the target especially after last year when we finished second. I am really looking forward to the race. I'm fully motivated. Victory must be the target.

Roar Before the 24: successful tests for both Ligier JS P2 cars