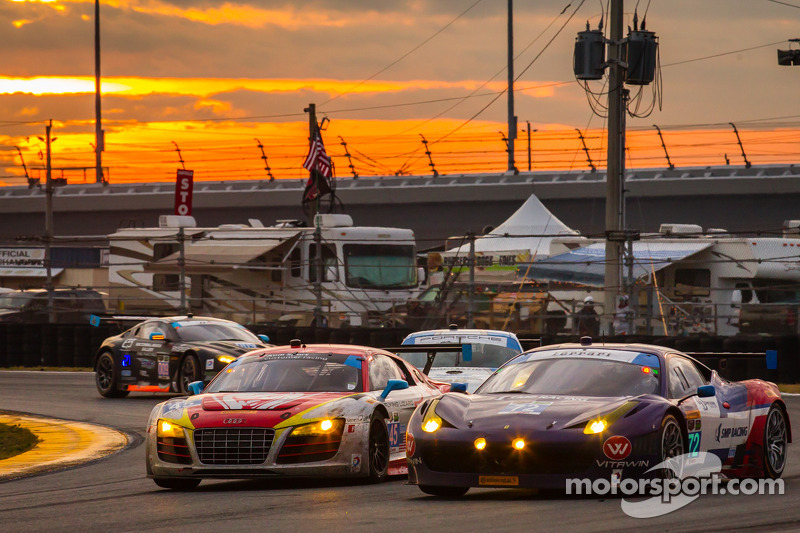 The end result was a 2nd place finish for the No. 45 Venezuela / eSilicon Audi R8 LMS.

After a full 24 hours of racing at Daytona International Speedway, Flying Lizard Motorsports was able to place both of its cars in the top-5 in the GT Daytona class at the season opening Rolex 24 at Daytona, the first race of the TUDOR United SportsCar Championship. The end result was a 2nd place finish for the No. 45 Venezuela / eSilicon Audi R8 LMS of Nelson Canache Jr., Spencer Pumpelly, Markus Winkelhock, and Tim Pappas, and a 5th place finish for the PR Newswire / UBM Tech / eSilicon Audi R8 LMS of Seth Neiman, Dion von Moltke, Filipe Albuquerque, and Alessandro Latif. 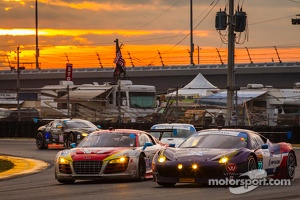 Starting from the 18th and 20th positions, the team ran an essentially trouble-free race with both cars, eventually finding itself racing for position with each of its cars in the final two hours. Filipe Albuquerque took the last stint in the No. 35, which had come back to within one lap of the class leaders. In the end he was racing against the Level 5 Motorsports No. 556 Ferrari 458 for 5th position, passing the No. 556 immediately prior to the race's final caution period and then maintaining that position for the final run to the checker. Markus Winkelhock took the final stint in the No. 45 and was able to put on a huge late race battle against the other Level 5 team car, the No. 555. Despite contact in the Bus Stop turn within a few laps of the checker, Markus was able to mount another charge despite a bent right front suspension and broken wheel, swapping the lead back and forth with the No. 555 and attempting one final pass of that car which ultimately ended in the No. 555 forcing Markus to the grass with a half lap remaining and an eventual 2nd place finishing position.

The No. 45 was handed the victory as race control penalized the No. 555 for the move that put the No. 45 in the grass on the last lap. Though the results were declared final following the normal post race tech inspection, the penalty was lifted 3 hours later, making the No. 555 the winner, and the No. 45 second. Controversy about the incident, penalty, and the way the final decision was reached has been substantial. Following a meeting with top officials, team owner and driver of the No. 35 R8 LMS Seth Neiman said "What an emotional roller coaster – a 24-hour race always has these, and this has been one of the toughest. A great fight by Markus with a damaged car provided all of us with a spectacular finish to a deeply competitive race. The entire team and the Audi personnel that worked so hard to get our arms around these new cars in just 75 days should hold their heads high – it is a rare accomplishment in motorsports."

"The sequence of official decisions following the race was a big surprise, as we and Audi had been told the results were final, and did not realize that the supervisory body could make such a delayed ruling. This is a new series and has new rules and policies for all of us. I have asked for clarification of how the supervisory board works and how teams can present their case in situations like this. I think we also need some clarification on whether or not competitors are still required to give racing room in close situations. I have been assured information on both of these topics will be provided. That said, it's time to move on - congratulations to Level 5 – a great race. Now on to Sebring!"