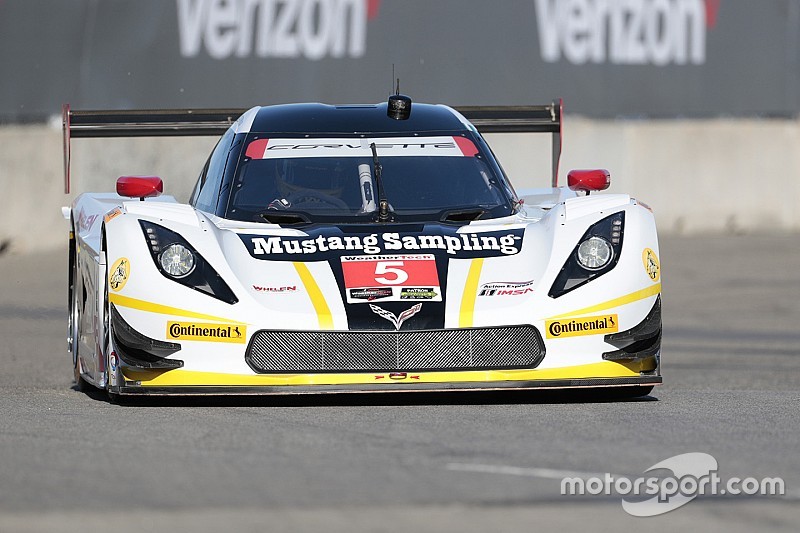 The Brazilian veteran lapped the course in 1min23.815sec, survived a spin on his second run, and took his second street course pole of the season, matching his achievement in Long Beach. He was just 0.048sec clear of Goossens who survived a hairy moment in the VisitFlorida.com machine during his final attempt to usurp the AXR driver.

Ricky Taylor’s Wayne Taylor Racing Corvette was third, some 0.4sec adrift, while last year’s Detroit-winning car, the second AXR Chevy, was fourth in the hands of Eric Curran. Fifth was Katherine Legge in her first outing in Michael Shank Racing’s Ligier-Honda, with the two Mazda Prototypes of Tristan Nunez and Tom Long in sixth and seventh.

Bryan Sellers headed up the GT Daytona class in the Paul Miller Racing Lamborghini Huracan, thus scoring Lamborghini's first pole in IMSA competition. But it was a close-run thing as he beat Patrick Lindsey’s Park Place Motorsport Porsche 911 by a mere 0.011sec.

These two were a quarter-second clear of Robin Liddell’s Stevenson Motorsports Audi R8 in third, while Spencer Pumpelly was fourth in another Lamborghini, the #16 Change Racing entry.

Matt Bell was fifth in the second Stevenson Audi, while Ben Keating growled the Viper around sixth quickest in the 13-strong GTD field.

While only seven Prototype Challenge cars hit the track, they put on an entertaining show. While James French of Performance Tech Motorsports and Starworks Motorsport’s Alex Popow squabbled over P1 and ended up just 0.027sec apart, Robert Alon of PR1/Mathiasen Motorsports swooped in to blow them away to the tune of 0.28sec to grab class pole.

Behind French and Popow, Misha Goikhberg was fourth for JDC-Miller Motorsports with Jon Bennett fifth in the CORE autosport entry.

No. 33 Dodge Viper GT3-R back home to Detroit this weekend