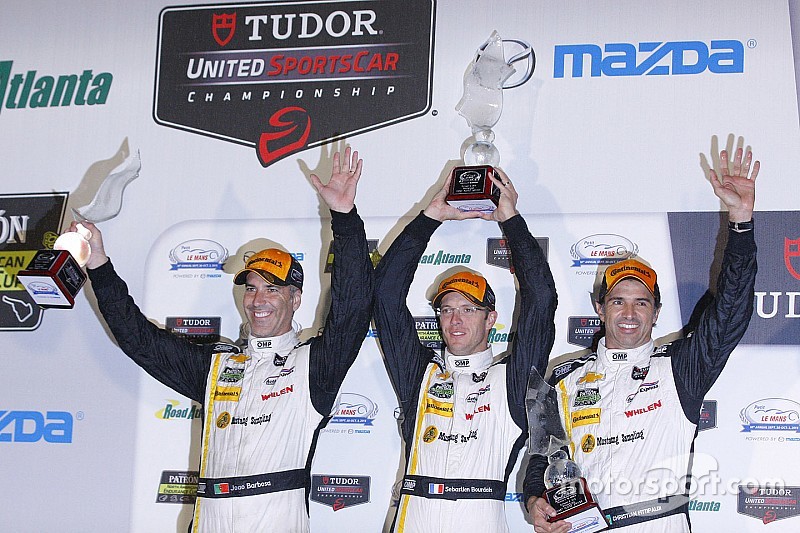 Bourdais drove Action Express Racing’s No. 5 Mustang Sampling Corvette DP to the lead at the three-hour, 38-minute mark of the scheduled 10-hour race. He led the following 54 laps until a red flag stopped the action at the five-hour, 21-minute mark. Barbosa took over shortly after racing resumed with three hours, 33 minutes remaining and regained the class lead in the closing minutes, but with conditions continuing to deteriorate, the race was checkered at the seven-hour, 51-minute mark.

I can’t say how happy we are with two championships in a row.

Fittipaldi and Barbosa entered the event tied for second with Action Express teammates Eric Curran and Dane Cameron, six points behind VisitFlorida.com Racing’s Richard Westbrook and Michael Valiante, 279-273. After Westbrook dominated the opening two hours of the race, a pair of spins on successive restarts by co-drivers Michael Valiante and Mike Rockenfeller cost the No. 90 VisitFlorida.com Corvette DP two laps, resulting in a fifth-place finish.

Curran led 30 laps down the stretch, pitting and turning the No. 31 Whelen Engineering/Team Fox Corvette DP over to Dane Cameron shortly after the 11th caution of the race waved due to a spin by Prototype Challenge (PC) driver Bruno Junqueira. That gave the lead to Barbosa, who led six laps under the caution before race officials made the decision to wave the checkered flag.

As a result, Fittipaldi and Barbosa unofficially came out on top in the final standings with 309 points, followed by Westbrook and Valiante with 306, and Curran and Cameron with 304.

Scott Pruett, Joey Hand and Scott Dixon finished second in the No. 01 Ford EcoBoost/Riley DP, placing fourth in the championship. They were followed by Curran, Cameron and Max Papis in the No. 31 Whelen Engineering Corvette DP, while defending Petit Le Mans winners Ricky and Jordan Taylor with Max Angelelli finished fourth in the No. 10 Konica Minolta Corvette DP.

It was the second victory of the season for the Action Express trio, who won the Mobil 1 Twelve Hours of Sebring Fueled by Fresh From Florida. Fittipaldi and Barbosa won three races and the Tequila Patrón North American Endurance Cup in 2014, clinching the two titles with a second-place finish at Petit Le Mans powered by Mazda. Saturday, Action Express again doubled up, clinching TUDOR Championship and Patrón Endurance Cup crowns with a victory in the Road Atlanta classic.

Tom Kimber-Smith, Mike Guasch and Andrew Palmer each took turns in the lead, driving the No. 52 PR1/Mathiasen Motorsports Cuttwood/Spyder ORECA FLM09 to a dominant victory in the Prototype Challenge (PC) class. The trio led 159 of the 190 laps en route to their fourth triumph of the season.

While the trio wrapped up PC honors in the Patrón Endurance Cup, they came up five points shy of winning the season championship. Jon Bennett needed to achieve the minimum driving time to give CORE autosport its second consecutive PC crown. Bennett met that goal, and then joined Colin Braun in finishing fourth in the No. 54 Flex-Box/Composite Resources ORECA FLM09 to share the title. They were joined by Anthony Lazzaro at the finale.

· In addition to finishing second in PC in the No. 8 Starworks Motorsport Martini ORECA FLM09, Alex Popow also led five laps in the team’s No. 88 entry. That car was involved in an incident while running second with John Falb at the wheel, resulting in that car’s retirement.

• Ozz Negri and John Pew managed 100 laps in the No. 60 Michael Shank Racing AERO Honda/Ligier JS P2. That was a feat in itself, considering that the car sustained major damage during an incident in Thursday’s night practice after Negri set the fastest lap of the weekend earlier in the day. The damaged car was taken to Elan Motorsports in nearby Braselton, where Elan and DeltaWing Racing worked all night making repairs, returning it to the track at 9 a.m. on Friday.

• The 2015 champions will be recognized at the TUDOR Night of Champions on Monday evening at the Georgia Aquarium in downtown Atlanta. The next activity for the IMSA WeatherTech SportsCar Championship will be a two-day test at Daytona International Speedway, Nov. 17-18.

“It was an awesome day for the whole team. The whole thing starts back at the workshop. In two years, this car has only missed one lap and that was under reasons not under our control. Myself, Joao and Seb just try to execute as much as we can with what they prepare for us. I can’t say how happy we are with two championships in a row. When you’re at the top, competition naturally wants to knock you down. We would have done the same thing with other guys on the top. We are going to continue to work hard, but we are very confident to put it together again. So I’m looking forward to next season.”

“[Being called champion] sounds good, can you repeat it? It sounds really good. The goal we had coming into this year was to try and win another one. Action Express, the team is expected to win. We come in with the same mentality. We want to go all the way to the end. This was no different, we came in with a deficit to the No. 90 car, so we wanted to win the race and get the best. This was not the conditions we were expecting or how we would end the year. Luckily we had the right strategy. We lasted without making any mistakes, and it was stressful to not put a wheel wrong.”

“Strange race, crazy race, wet race. One of the worst since 2001 when we won at Le Mans. We weren’t racing out there, we were just trying to survive. There were times you couldn’t see, just nothing. We had a solid car all weekend, but rain is always the great equalizer. It’s crazy to see a GTLM car winning overall.”

“It was very wet. I don’t think I’ve ever been this wet coming out of a bath or shower. It was very tricky, especially Turns 3 to 5. There seemed to be a lot of rivers flowing through the circuit. Mathematically, we could win the main championship but we had a strategy to qualify me, and then lead at the halfway mark, which played into our hands. CORE fell under pressure and it’s not like them to make a mistake crashing out. These guys drove really well, Andrew drove three hours under tricky conditions and Mike didn’t put a foot wrong. I was praying at the end to go red and in the end it worked out.”

“It’s nice to win Petit, I hadn’t won this yet. And the Tequila Patrón North American Endurance Cup is such a treat. The water was deep, it was pretty dangerous. We kept at it and we pulled it off. The strategy was to get here and win the Patrón Endurance Cup, and that was our best shot. So then to get the win it would be fantastic, so we came here to accomplish exactly what we wanted to do.”

“For us that was the goal when we started out the season, we wanted to win five of these championships and two in a row. We were ‘radared’ in for the weekend. These guys work so hard and Jon has put together such a great group of people. It makes people that much more motivated to catch us or beat us. It’s just a testament to the work ethic that’s instilled in the group. We just keep moving forward here.”