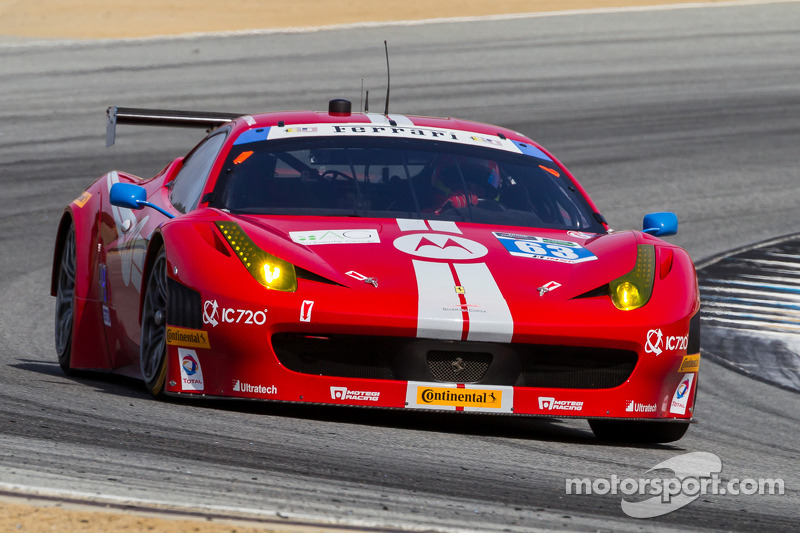 For the second time this season, a Ferrari 458 Italia has scored victory in the TUDOR United SportsCar Championship’s competitive GT-Daytona class.

Thanks to the driving of Alessandro Balzan and Jeff Westphal, as well as the work of the Scuderia Corsa pit crew, the no. 63 Scuderia Corsa Ferrari 458 Italia scored its first win of the season at the Raceway at Belle Isle. It started the 100 minute race from the seventh position, with Westphal advancing to third position during the opening stint. Facing intense pressure from other GT-D class cars, while at the same time working through lapped traffic, Balzan held on to take victory by the narrow margin of 0.297-second.

A fast pit stop allowed the car, now with Balzan at the wheel, to assume the lead in the race’s final hour. The win was Balzan’s second and Westphal’s first in North American sports car racing. The victory was the seventh for the Ferrari 458 Italia GT-Daytona since its introduction in 2012, and consolidated Ferrari’s position at the head of the TUDOR Championship’s manufacturer standings.

“It’s a great day,” said Balzan. “I am very happy for Scuderia Corsa, very happy for Jeff Westphal because it is his first win, and very happy for Ferrari because they are celebrating the 60th Anniversary. We did a lot of pit stop practice this morning and the team executed it perfectly. I am very proud – we have a very good handling car but the level of competition is very high.”

The no. 555 AIM Autosport / Cauley Ferrari Ferrari 458 Italia enjoyed a strong run until the final laps of Saturday’s race. Started in 11th position by Bill Sweedler, the car advanced as high as fifth position when Townsend Bell was involved in an incident in the first corner of the Raceway at Belle Isle. Bell would recover to finish in eighth position. With the result, Bell and Sweedler maintain their lead in the TUDOR Championship driver’s standings.

Ferrari 458 Italias will next compete in the Sahlen’s Six Hours at the Glen on June 27-29 at Watkins Glen International in Watkins Glen, New York.