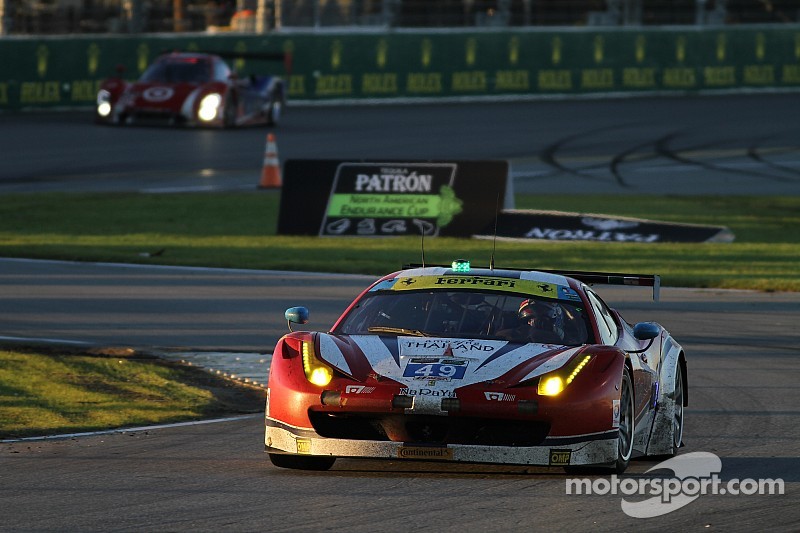 Daytona Beach, Fla. – The five Ferrari 458 Italias entered in the 24 Hours at Daytona demonstrated the speed and competitiveness of the car in two classes. Both the two Ferraris in the GT-LeMans class and the three in the GT-Daytona class led their classes during the race, challenging for the lead from the drop of the green flag on Saturday afternoon.

Ferrari has demonstrated its competitiveness at Daytona throughout the race’s history, with eleven class victories including last year’s victory with the 458 Italia. On the strength of the performance throughout this year’s 24 hours, Ferrari leads the Patron North American Endurance Cup manufacturer standings.

The best finishing Ferrari in this year’s race was the no. 49 AF Corse Ferrari 458 Italia driven by Pasin Lathouras, Michele Rugolo, Rui Aguas and Matt Griffin which finished in fourth position in GT-Daytona.

In the GT-LeMans class, both Ferraris also led the field before being forced to retire. Both the no. 62 Risi Competizione Ferrari 458 Italia of Giancarlo Fisichella, Pierre Kaffer, Davide Rigon and Olivier Beretta and the no. 51 AF Corse Ferrari 458 Italia of Francois Perrodo, Gianmaria Bruni, Toni Vilander, and Emmanuel Collard retired from the race during the night time hours.

The next round of the United Sports Car Championship will be the Twelve Hours of Sebring, held on March 21 at Sebring International Raceway in Sebring, Florida.