Demonstrating the speed of the 458 Italia, five examples of the model qualified in the top-eight of the 29-car GT-D field. The Rolex 24 at Daytona is also the first race of the Tequila Patron North American Endurance Cup.

Vilander, who missed the Roar Before the 24 earlier in January, recorded a lap of 1:47.028 to narrowly take the coveted pole position. 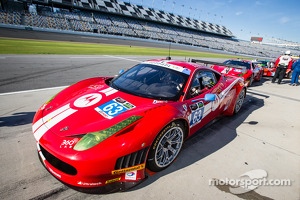 “Even though I had so little track time, I was confident when I got in the car for practice and was on the pace immediately,” said Vilander. “The car was already very good and we didn’t need to change the balance much. It’s good to see so many manufacturers very close, but at the same time I’m really confident for the race. The drivers need to do a clear, solid job and the crew needs to do the same thing. And we have a good chance for the race.”

Brazilian Daniel Serra, who is competing in his second Rolex 24 at Daytona, raised eyebrows with a strong run to the front row, placing second in the no. 65 Scuderia Corsa / Via Italia Ferrari 458 Italia.

“After we were first in the previous practice, it was a good qualifying and a really good result,” said Serra. “We didn’t come for the Roar Before the 24 and I did 15 laps before qualifying, and we didn’t change the car so we have room to improve. On the front row is a good place to start the race. Our engineer had a really good strategy to get me on the track without traffic – I didn’t have the benefit of the slipstream but I could drive the infield as I should. We always want more, we always want pole, but it was a good lap.”

“We were right there,” said Bell. “I knew we were going to be in the hunt, but for a long race the important thing for us is to make smart decisions. So we’ll take that lap, save the tires and protect the car for the race. We’ve improved things incrementally, but the Ferrari is so awesome to start with it doesn’t take much, but it feels really strong right now.”

In the GT-LM class, Peter Dumbreck qualified the no. 57 Krohn Racing Ferrari 458 in ninth position.

Neither the no. 62 Risi Competizione Ferrari 458 in GT-LM nor the no. 49 Spirit of Race Ferrari 458 Italia in GT-D turned laps during qualifying.