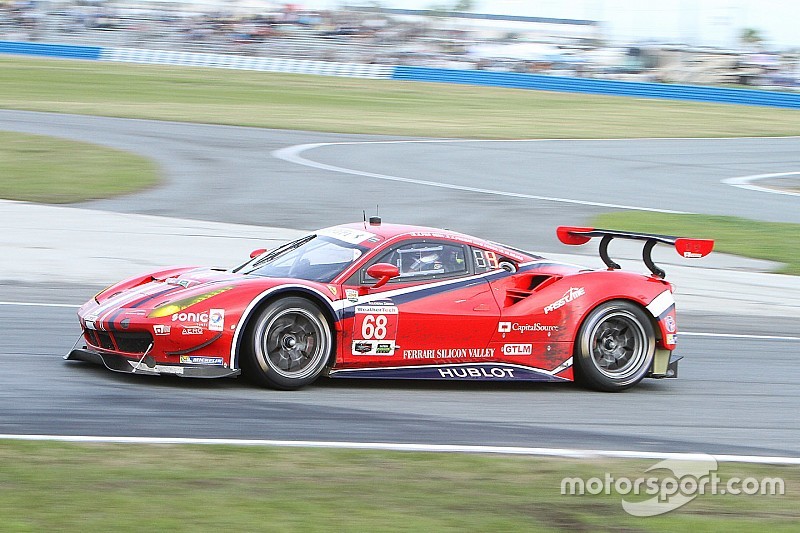 Daytona Beach, Fla. January 31, 2016 – In the debut race for the Ferrari 488 GTE, the new racer demonstrated its performance and reliability in North America’s most important endurance race.

At the same time, the era of Ferrari’s 458 Italia in North American endurance racing came to a close after amassing twelve victories since its debut in 2011. Among those victories is a 2014 victory at Daytona in the GT-Daytona class, one of many victories for Ferrari on Daytona’s high banks which goes back to the first Daytona Continental in 1962. In that race, a Ferrari 250 GT scored a class victory.

Twenty four hours of racing on the high banks of Daytona International Speedway provided the first true test of endurance for the Ferrari 488 GTE. The no. 68 Scuderia Corsa Ferrari 488 GTE led the way by finishing in fourth position in the GT-LeMans class. The car, which was driven by Alessandro Pier Guidi, Alexandre Premat, Memo Rojas and Daniel Serra, fell laps down in the early stages of the race following a pit lane penalty. However, the team was able to regain the lead lap and led the race at the 12th hour before finishing in 4th position.

The no. 62 Risi Competizione Ferrari 488 GTE led the GT-LeMans class in the early stages of the race, but was slowed in the race’s second half after contact by another car caused significant damage to the car. Drivers Olivier Beretta, Giancarlo Fisichella, Davide Rigon and Toni Vilander drove the Ferrari to the checkered flag in sixth position.

The third of Ferrari’s new racers, the no. 72 SMP Racing Ferrari 488 GTE driven by Andrea Bertolini, Gianmaria Bruni, James Calado and Victor Shaytar retired just before the 19th hour after challenging for the lead throughout the race.

Daytona also marked the final race for Scuderia Corsa’s Ferrari 458 Italia in the GT-Daytona class. A strong run for the no. 63 Scuderia Corsa Ferrari 458 Italia, which was driven by Alessandro Balzan, Christina Nielsen, Robert Renauer and Jeff Segal was slowed after a car was hit by another car just before the race’s halfway point. Despite the damage, the Ferrari finished the race in seventh position.

The no. 51 Spirit of Race Ferrari 458 Italia that was driven by Marco Cioci, Matteo Cressoni, Rafaelle Gianmaria and Peter Mann also completed the 24 hours and finished in 11th position.

The next race of the IMSA SportsCar Championship will be the 12 Hours of Sebring on March 16-19 at Sebring International Raceway in Sebring, Florida.