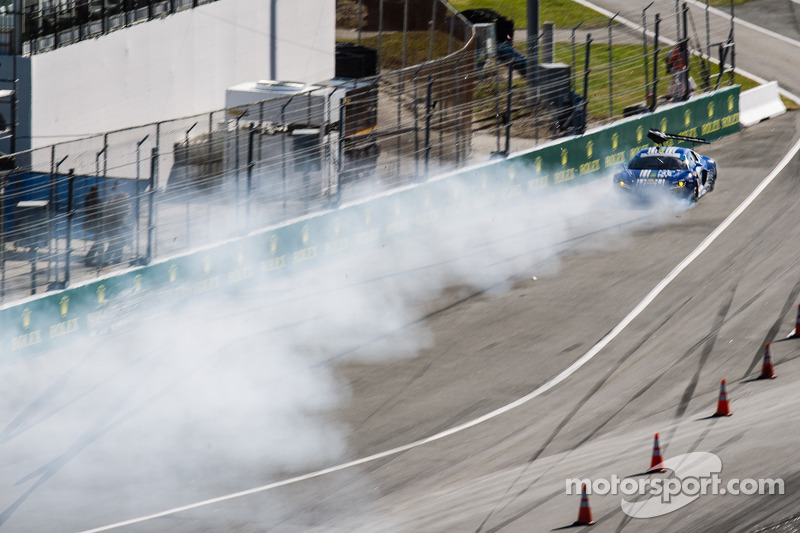 The Fall-Line Motorsports Audi R8 LMS driven by Charlie Putman made heavy contact with the wall entering turn one.

Daytona Beach, FL ((January 26, 2014) - The Fall-Line Motorsports' Rolex 24 Hours of Daytona came to an abrupt end yesterday just as it was getting started. Shortly after the green flag fell on the 52nd running of the historic race and the first under the TUDOR United SportsCar Championship banner, the Fall-Line Motorsports Audi R8 LMS driven by Charlie Putman made heavy contact with the wall entering turn one. The contact was severe and left the car un-repairable. 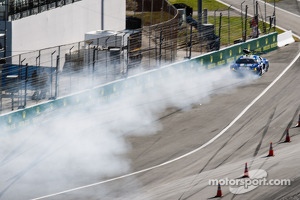 The early exit was a devastating end to a promising race as the #46 Fall-Line Motorsports Audi R8 LMS had been quick in practice and driver Oliver Jarvis qualified 3rd in the GTD category.

The quartet of talented drivers Charles Espenlaub, James Walker, Jarvis and Putman had done their homework and were prepared for a long race in one of the most competitive classes in the field. The Audi R8 LMS was strong and the entire team had high hopes for a good finish.

The details of the crash are best told by the team's heart and soul Charlie Putman (one of the most likeable guys in the paddock) who was behind the wheel of the #46 when it suffered the fatal blow.

Charlie Putman: "I want to let our friends and fans know that the incident at Daytona today was sad and the impact was rough, but I am 100% okay. The engineering of the Audi R8 LMS chassis is incredible and functioned as designed, sacrificing itself to protect me from the high-speed impact. Of course we use the very best Safecraft seat belts and restraint nets with no compromises on any safety equipment and all of those safety systems paid for themselves today.

I'm personally so sad because all of the crew have worked long days and nights with unbelievable heartfelt dedication to make our car the best of the best. The hard physical impact to me and to the car was minor in comparison to the emotional blow to all of us. We have received such an outreach of concern and support from all our fans and I am truly touched and blessed by the well wishes of everyone. You will help us to be back stronger and faster than ever!

The Fall-Line Audi R8 LMS showed signs of being the fastest R8 in the field for this race and was setup beautifully. The setback to the rear of the grid on a technicality after qualifying in 3rd was not a concern to us, as we knew that in this long race with such a strong car we would easily work our way back into the thick of it.

I was having a great opening stint and everything appears to have been normal according to the data systems, up until the moment the car unexplainably pitched to the inside of track just before entering turn one. This is the fasted place on the track, and not a place where cars are expected to spin, so the contact with the bare concrete wall there was disastrous. It is too early to theorize exactly what happened, but as one of my teammates reminded me, this is racing and things happen. We just keep striving forward and we will prevail.

I want to thank my co-drivers Charles Espenlaub, and particularly Oliver Jarvis and James Walker for their support and contributions to the team. While Charles (Espenlaub) and I have teamed up for many years, this was our first opportunity to work with Oliver (Jarvis) and James (Walker). We hope to see more of them as they are not only exceptional drivers, but very nice people (if you can ignore their British accent!) Nathan McBride is simply a genius on the car set-up and development. Our relationship with Audi's support group really shows the signs of mutual respect and I know that as the year goes on we will only grow stronger together.

Thanks again to all our friends for the concerns and well wishes."

Oliver Jarvis: "After a great buildup to the race, it's devastating to go out so early. The team did a fantastic job and I know we had a car capable of winning the race. But unfortunately that's motor sport. The most important thing is that Charlie (Putman) is okay. I would like to say a huge thanks to the team who worked their butts off to prepare the car for this race and it's a real shame they didn't get the reward they deserved."

James Walker: "It's obviously disappointing to go out early on in the race, but the main thing is that Charlie (Putman) is okay. It's very easy to forget just how quick these cars go, especially around the banking at Daytona. It was my first race with the Fall-Line crew and hopefully not my last. It's been great to work with everyone. They are such a professional outfit. A huge thank you to everyone there for all their hard work."

Charles Espenlaub: "We are so glad Charlie (Putman) is okay. We have to thank Fall-Line and Audi for building a very safe Audi R8 LMS. It did its job and kept Charlie out of harms way. It is so unfortunate that all the hard work and preparation over the last few months by everyone will not get the results they deserve. They did all the work and we were in position for a great result but that is racing and we will be ready for Sebring."

Michael Harvey, Fall-Line Motorsports Team Manager: "Very disappointing to go out so early and just glad Charlie is okay. The whole Fall-Line crew has worked so hard and we defiantly had a car to compete for the win. Huge thanks to Oliver (Jarvis) and James (Walker) who fit in seamlessly to our program and of course our friends at Audi Sport customer racing who have been incredible with their constant support and service."