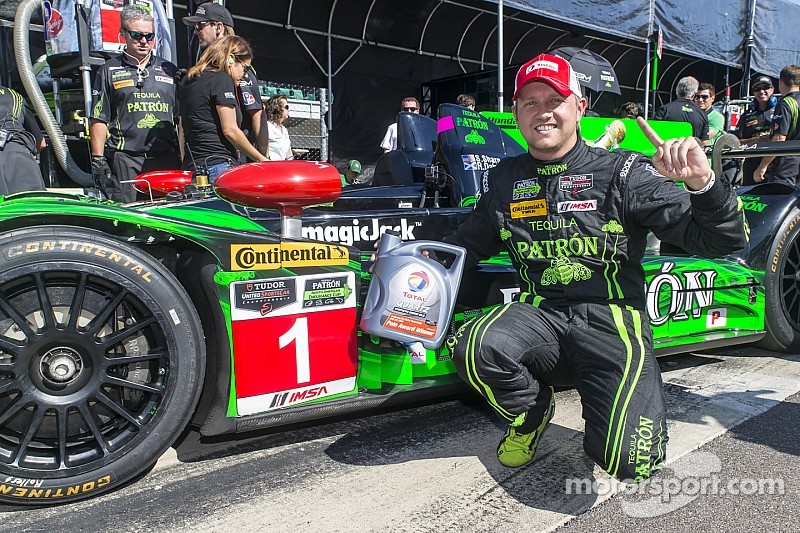 The ESM team was on its game today, capturing both spots at the front of the grid for tomorrow's Brickyard GP.

It's National Patrón Tequila Day, so I don’t think we could ask for anything better

“Great day, National Patrón Tequila Day, so I don’t think we could ask for anything better,” Dalziel said. “It would’ve been nice not to have the incident. ... We needed a good result today and we need a better result tomorrow. We can honestly say that we expected this to be the worst event for us this year. We were fully prepared to come in and get slaughtered pretty good, just try and pick up some points and have a reliable race. I think the resurfacing of the track and also using the IndyCar layout has helped.”

Even though P2 cars took the first three qualifying positions, the Tequila Patrón drivers believe the Daytona Prototype cars will have the overall advantage in Friday’s race. But van Overbeek isn’t ready to give up on Friday’s race.

“After the last couple events, starting on the front row is a piece of it, but we have two hours and 45 minutes to make it count,” said van Overbeek, who’s teamed with Ed Brown. “The team needs it. We’ve had a lot of gremlins, a lot of problems. We’ve worked through a lot of them, but a good resulttomorrow would really be a good boost.”

Braun on top in PC

Colin Braun became the first driver in this inaugural TUDOR Championship season to win three pole positions, driving the No. 54 CORE Autosport ORECA FLM09 to the top spot in Prototype Challenge (PC) with a lap of 1:19.849 (109.963 mph). The No. 54 driven by Braun and Jon Bennett has won five of the first six races this season and has gone on to victory each of the previous two times it has started first in its class.

“I think my second or third flying lap was probably good enough for pole, but I didn’t think it was going to be good enough so I kept trying to chip away at it,” Braun said. “A little bit disappointed that we didn’t go as fast (in qualifying) as we did in practice, but obviously really excited to have the pole. The guys did a great job and I think we have a really good race car for tomorrow, so that’s the important part.”

Giancarlo Fisichella never won the pole in eight tries driving the Formula One U.S. Grand Prix at Indianapolis, but the Italian took top honors in GT Le Mans (GTLM) qualifying. Fisichella claimed the pole in the No. 62 Risi Competizione Ferrari F458 Italia in 1:22.378 (106.587 mph). John Edwards was second in the No. 56 Team RLL BMW Z4 GTE, making Edwards a bridesmaid for the second time of the day following his runner-up qualifying effort in Continental Tire SportsCar Challenge GS class trials.

“I have great memories, I scored a podium with a Formula One car (at Indy), and today I am on pole,” Fisichella said. “I like the shape of the circuit, it looks very interesting. ... I did a great lap, a perfect lap. I am confident with the car, with the circuit, I am comfortable in the car and we went in the right direction with the car balance and the setup. Tomorrow is going to be tough, but the pace is there and we can do well.”

Dane Cameron reminded everyone that the No. 94 Turner Motorsports BMW Z4 is still a threat for the GTD title by taking top qualifying honors in that class with a lap of 1:26.058 (102.029 mph). Just like the championship standings that see the top seven cars grouped within 19 points, qualifying was just as tight with the top eight cars separated by less than a half-second.

“I wasn’t sure what to expect really,” Cameron said. “We kind of came into the weekend thinking we were going to take a bit of a beating, but they’ve done a great job with the track here. It’s a lot higher grip and the cornering speed is higher and there are some long corners and fast changes of direction – all things that really suit our Z4. We’re happy to see those things added to the track and it plays to the strengths of our car. We’ll see what tomorrowbrings; the hard work starts tomorrow, but we’re much more competitive than what we envisioned so we’re pleased.”

The two-hour, 45-minute Brickyard Grand Prix is scheduled to begin at 5:45 p.m. ET Friday. It airs live on FOX Sports 1.