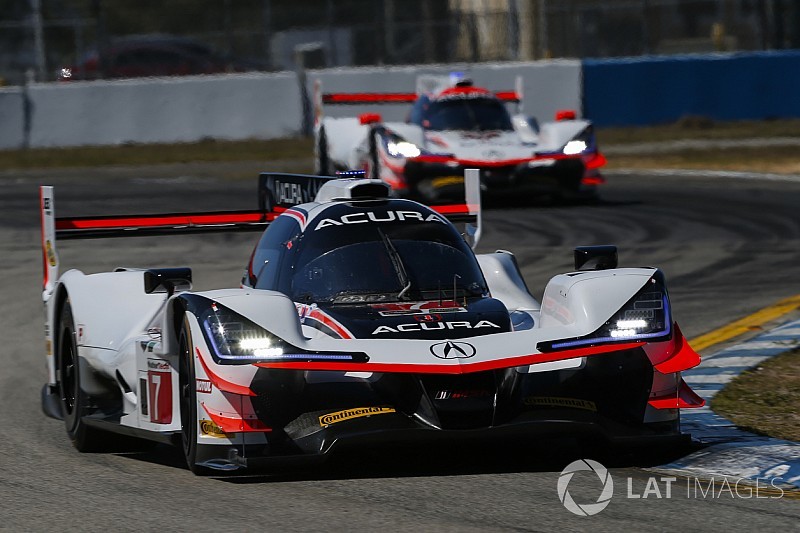 The potential of Acura’s DPi is obvious: cutting-edge design, a strong engine, Penske in charge of operating the cars and an all-star driver lineup. Small wonder, then, that wins are expected sooner rather than later.

Roger Penske’s latest foray into sportscar racing is still just three races old. There was the “warm-up” at Petit Le Mans last October, in which The Captain’s crew members reacquainted themselves with IMSA’s regulations and the specific demands of this branch of the sport.

Using a single Oreca-Gibson V8, and the talents of Helio Castroneves, Juan Pablo Montoya and Simon Pagenaud behind the wheel, the result was pole position and a third-place finish.

By then, testing had also begun with the Oreca-based Acura ARX-05s, which have been blessed with HPD’s 3.5-liter twin-turbo engines, and fulltime lineups of Castroneves/Ricky Taylor (car #7) and Montoya/Dane Cameron (#6). Pagenaud and Graham Rahal are the third men for the endurance races.

For the Rolex 24 at Daytona, the Penske-Acuras qualified second and 10th, but suffered major setbacks that led to them finishing only ninth and 10th, 15 laps behind the winner. At last weekend’s Sebring 12 Hours, the pair started third and sixth, both looked at least podium contenders, but then both retired.

Motorsport.com caught up with Penske team manager Kyle Moyer to get his view on the Acura Team Penske story so far, and find out what he’s expecting from the remainder of 2018.

DM: I realize you probably can’t go into specifics, but what can you tell us about the DNFs at Sebring last Saturday?

KM: We’re still diagnosing the issues but they were both motor failures – and it’s really strange because we haven’t had motor problems at all up to now. We’ve done a lot of testing since way back in October, and a lot of our tests weren’t about car handling – they were just about putting laps and laps and laps on the car.

The drivers were yelling and screaming at us because we were making them double-stint tires to get more laps! And we’ve never really had to do anything to the engine. We’ve modified an ECU as things progressed, things like that, but nothing with the motor itself.

So to have those issues at Sebring wasn’t something we expected at all. The motor that ran Daytona in the #7 car, we took that motor down to Sebring for the test in February, and put another 1100 miles on it! Now we’ll have to work out what went wrong and why. What I can tell you is that the problems with both cars were the same…

So it was pure coincidence that Montoya’s Acura received a whack up the backside from another car just before it died?

In terms of pace, the Acuras have looked on it. What’s your perspective on IMSA’s current Balance of Performance equations for the Prototype class?

I think if you look at Sebring, the BoP was great, they’ve done a fantastic job. You’re really looking at four areas – horsepower and driveability off the corner, straightline speed, downforce level and fuel mileage. And I think they nailed it – no one was strongest across all four aspects.

The only thing that stood out for me was that the red cars [Mazdas] seemed to be able to go four or five laps longer than everyone else in each stint… but on the other hand, it’s good to see them up at the front now. I think IMSA helped them get to where they need to be, so at Sebring every manufacturer in Prototypes had a chance to win, which is what the aim is.

Given the vast difference between Daytona and Sebring, and the fact the Acuras were fast at both, would that indicate you’ll be strong everywhere? Or is there a particular type of track that you think that will favor your cars?

Long Beach will be all about qualifying and I think we’ve got some top guns in the cockpit for getting the job done there – they all know their way around there, so that’s good.

To your point about tracks suiting the car, though, I think Mosport and Mid-Ohio. We don’t exactly have the legs that others have down the straights, but I think the real technical tracks – difficult tracks where there’s a lot of turning back and forth – I think that in terms of maximizing our car, we have the drivers to do that.

Have you identified areas where you think the Acura is already the best?

I thought at Daytona we were quick in the slow corners, the infield, so although we lacked some straightline speed, we made up for it OK. And we worked hard at getting the cars good for the Bus Stop chicane, too, so we could carry as much speed as possible onto the straights – or rather, the oval section. That made it hard for someone to get a run on us, even if we lacked top speed.

At Sebring… I don’t know. I think everyone stepped up their game, the opposition have some good drivers and it’s a difficult series to stand out in; I don’t think anyone’s going to do that this year.

Have you had any problems reminding the ex-IndyCar drivers on the Penske squad that this is endurance racing, and they shouldn’t always drive the hell out of the cars?

Ha! Well, Ricky and Dane have had to do a lot of teaching on that, and having someone like Simon for the endurance races is good because he’s done a lot of sportscar racing in the past – very successfully, too. But yes, we’ve had to rein in two of our boys pretty hard.

One of them seems to be getting it, but the other one seems to have a problem with a couple of cars out there at some time during a race. But overall they’re getting better and better at understanding the circumstances.

The problem is that sportscar racing has really changed, especially in Prototypes. As recently as last season, people were talking about endurance. This year, even at Daytona for the Rolex 24, it was flat-out for the first 14 hours, almost running qualifying laps, and it was only the last four or five hours that a couple of cars really broke free at the front.

That surprised Ricky and Dane, but it wasn’t such a big deal for Juan and Helio because they find going flat out at all times comes completely naturally! If you look back at Petit Le Mans when we ran the Oreca, I think all the teams were running quali laps for all 10 hours there, too. It’s a long race, but it’s still flat out from Lap 1.

Considering your crews have to perform, say, 15 stops in a 12-hour race, do you think operationally that Penske is right up with the best of the opposition already?

At Daytona, each crew did 22 or 24 stops, and we got 11 or 12 of them in at Sebring before the cars retired, so we’re now getting practice in race conditions. So that’s the way to get better, to feel that pressure you get only in race conditions.

How about you guys on the pit wall – have you adapted to the very specific strategic demands and rules you have to deal with in IMSA?

Well, it’s very different to IndyCar. You’ve got the first pass around, the final pass around, and then this year the class split, which you need to be paying attention to. We saw a couple of guys get in trouble for doing it the wrong way, and that’s because it’s hard to keep on top of it.

So is it more difficult to call than an IndyCar race? Yeah, because of all that. We have longer stints to think things through, yeah, but you still better be on your A-game because there’s a lot of things that can happen.

Fortunately, we’ve worked really hard on all that, we’ve gone through the rulebook and we’ve had a lot of debriefs and pre-race meetings, and in the three races so far, we’ve not had a penalty. That’s what we keep saying – go penalty free and we might have a shot at winning.

Are you confident that Acura Team Penske will be a winning team by the end of the year?

I hope so because that’s absolutely what’s expected of us – everyone at Acura and everyone at Penske expects it. That’s what we’re here to do and I don’t see any reason why we wouldn’t. There’s nothing that stands out where I’d say, ‘we have a problem.’ So far we’ve just had little things here and there that we need to clear up in order to get into Victory Circle.

And did you have those expectations going into this project, or have they developed on account of how quick the Acura has been?

I don’t know if we expected that, but we certainly hoped that would be the case, and we’re always prepared to work hard at it. The Cadillacs were pretty dominant last year and we knew they’d be hard to catch. But two races in, a Cadillac wins Round 1, a Nissan wins Round 2, and I see no reason why an Acura can’t go to Long Beach and win.