After a brief hiatus with the PC class of the TUDOR United SportsCar Championship sitting out the Long Beach event, Sunday, May 4, BAR 1 and the rest of the PC field return to action in the rolling hills of Mazda Raceway Laguna Seca on the Monterey peninsula.

The No. 88 ORECA will be driven by Doug Bielefeld and Ryan Eversly.

Doug Bielefeld has been a sports enthusiast for many years competing as a professional tennis player for many years to his current passion of road racing in the Tudor US Sports Car Challenge. He started just three years ago driving a GT3 Cup in the Porsche Club of American along with NASA. He won multiple podiums and two consecutive National Titles. In 2013 he had his first chance to drive in the Grand Am Series with a Aston Martin for TRG at the new Circuit of the Americas. After a reasonable lead lap finish he was offered a chance to test with the very successful podium winning ALMS team of Bar1 Motorsports. After three successful tests he went on to compete and finish the First US Sports car challenge race at Daytona in the 24 hours with Bar 1. Then, the next month finished 6th in the 12 Hours of Sebring with the same successful Bar 1 Team. 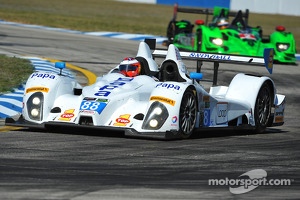 “I think Laguna Seca marks the beginning of a great relationship bringing the talents of Ryan Eversley to work with me and the Bar1 team,” said Doug. “Ryan is a great professional and I'm proud to race with him and grateful for the team bringing us together! I'm very optimistic and excited to be involved with the Tudor United SportsCar Challenge series!”

Ryan Eversley is a 30 year old race car driver from Atlanta, Ga. Following in his fathers foot steps into the world of sports car racing he began turning wrenches as a teenager for various race teams while getting seat time in any race car he could. Ryan's been competing in professional road racing since 2003 and has accumulated wins and podiums in the ALMS, Grand-Am, World Challenge series and recently was the 2013 runner up in the Continental Tire Sports Car Challenge drivers championship. When Ryan's not on track he's usually campaigning for the Children's Tumor Foundation and Racing 4 Research in hopes of curing the disease Neurofibromatosis. Follow Ryan on Twitter at @RyanEversley

“I'm really excited to join BAR1 and team up with my friend Doug this weekend at Laguna Seca,” added Ryan. “I’ve known Brian {Team Owner, Alder] a long time as we were both mechanics in the old Grand-Am and ALMS days, so it's really cool to team up with his team in the Tudor series. I've never raced the PC car but I've raced P2's in the past so I'm really looking forward to the challenge!”

Mazda Raceway Laguna Seca is an 11-turn, 2.238-mile jewel of a road course on California’s beautiful central coast. While the track is a favorite of racers and fans worldwide, many focus on one specific section—officially Turns 8 and 8A—or more commonly known as The Corkscrew.

Due to the popularity and increased car counts of the new Series, this year’s format at Mazda Raceway Laguna Seca will be split into two separate races. The PC and GTD (33) cars will run their two hour event taking the green flag at 1:15PM EST (10:15 on the west coast), while the Prototype and GTLM (23) cars will run at 5:45PM EST (2:45 on the west coast). Both events will be two hours in duration.