New sponsor for the Prototype team in TUSC. 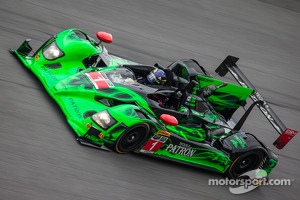 The magicJack logo will be added to the side of the black and green racing machines starting with this weekend’s 52nd Rolex 24 At Daytona, the season-opening race of the TUDOR Championship and first of the four-race Tequila Patrón North American Endurance Cup.

“We are thrilled to have magicJack, the leader in VoIP service, join the Extreme Speed Motorsports and Tequila Patrón racing family,” said Scott Sharp, ESM owner and co-driver of the No. 1 Tequila Patrón HPD. “Both ESM and magicJack are young and developing organizations, so it is a great fit. The magicJack device and app are great alternatives to the traditional phone line we think our fans will embrace. While streaming the TUDOR Championship races on their computers, they can also call their friends to talk about the race and enjoy some impressive cost savings. We’re looking forward to a long partnership with magicJack.”

“magicJack is on the move and this partnership highlights our aggressive efforts to broaden the appeal of our compelling service,” said Gerald Vento, CEO of magicJack. “We can think of no better partner than ESM and look forward to being a part of the ESM Patrón team this season. We’re eager and excited about Rolex 24 debut and watching Scott and the entire ESM Patrón team during the Fox family of networks’ first-ever flag-to-flag coverage of the race. With Fox’s coverage of the race, we’re part of the motorsports world that has a domestic and international television audience of more than 335 million households across 144 countries.”

Founded in 2007, magicJack is the industry’s original VoIP (voice over IP) service. The magicJack enables consumers an alternative to fixed phone line services through an easy-to-use device that plugs into a computer's USB port or the in-home router and a phone. With hundreds in savings compared to traditional phone services, magicJack allows users to keep their existing phone number and make unlimited local and long distance calls to the U.S. and Canada, unlimited international calls to the U.S., unlimited magicJack-to-magicJack calls worldwide, free Wi-Fi calls with the magicJack app, free voicemail, caller ID, directory assistance, and call waiting. All of these features are only $49.99 for the magicJack PLUS device with six months free service and additional service as low as $1.66/month with no contracts. The Company has sold more than 10 million award-winning devices and has the use of more than 30 technology patents.