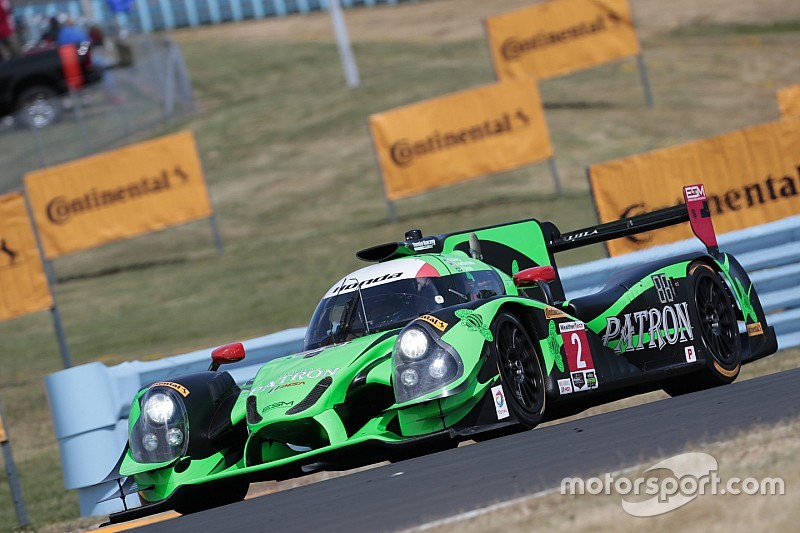 The field has been set for the 2016 edition of Sahlen's Six Hours of the Glen at Watkins Glen International.

Johannes van Overbeek held on a late charge from Mazda's Tristan Nunez to secure pole position for Extreme Speed Motorsports, putting up a new track record on the fresh asphalt (1:35.207).

"We knew the car had the possibility of getting pole and I didn't want to let the guys down," said Van Overbeek.

On his final lap, Overbeek was held up and Nunez had a shot to steal the pole away. He picked up two tenths, but it just wasn't enough, having to settle for second with a still very impressive time of 1:35.374.

During the entire qualifying session, the closest thing to an incident was when Christian Fittipaldi had slight contact with the outside wall at the exit of Turn 11.

Richard Westbrook blasted to pole position in the primary GT category in the No. 67 Chip Ganassi Racing Ford GT. Westbrook has been doing all the heavy lifting this weekend with his co-driver Ryan Briscoe missing practice for the birth of his second daughter. He arrived at the track this afternoon during the qualifying session and will get his first laps in the car during tomorrow morning's warm-up.

Westbrook went 1:41.301, which was just over three tenths clear of the BMW factory drivers. Dirk Werner in the No. 25 will start from the outside of the front row with his teammate John Edwards third in the No. 100. The outside of the second row is filled out by the sister No. 68 Ford GT.

"Been working hard all weekend," said Westbrook. "My car has been working really well, really pleased with the lap. The grip is unbelievable with the new surface, it takes a lot from the tires."

Starworks' Renger van der Zande earned his maiden pole after a back-and-forth battle with Robert Alon in the No. 52 PR1/Mathiasen Motorsports entry. PC came down to the very last second with all of the top five starters throwing down their fastest time on their last lap. The pole dropped down to a 1:38.407, which was a full eight tenths clear of Alon.

"Car is phenomenal ... I think we got it really well sorted," said Van der Zande.

Robin Liddell in the No. 6 Stevenson Motorsports Audi R8 LMS earned his first pole position since 2013, prior to the merger of the Grand-Am and ALMS. His fastest lap was his final lap (1:45.407), which was just 0.042 hundredths quicker than Mario Farnbacher (1:45.449) in the Alex Job Racing Porsche 911.

"The Audi is performing extremely well around here. We've worked really hard on this program to make it good -- The competition is really high.

"To beat some of these young guys out here is really special ... I'm really looking forward to the race tomorrow," said the 42-year-old Scot.