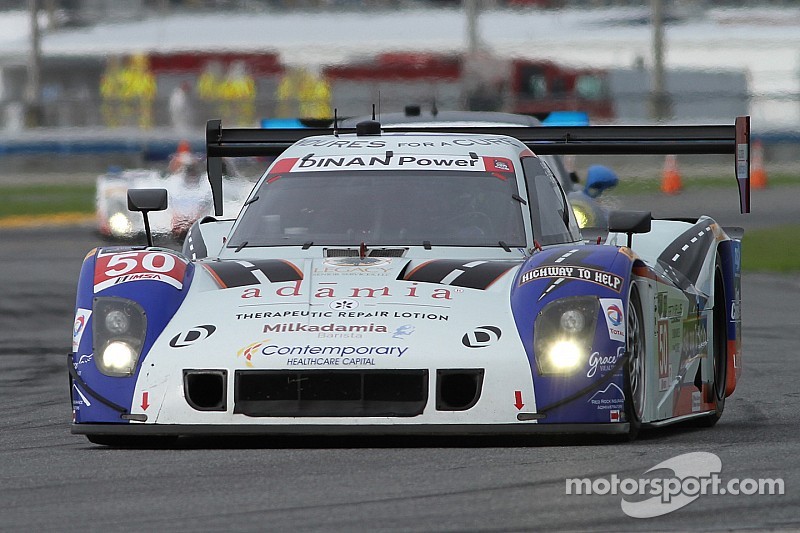 Team is making herculean effort to be back in action at the Rolex 24.

Lebanon — Repairs are underway on the Fifty Plus Racing "Endures for a Cure" Riley BMW Dinan following a spectacular crash during a test session at Daytona International Speedway in Daytona Beach, Fla., last weekend.

Byron DeFoor, co-founder of Fifty Plus Racing, was checked and released from the track's medical facility after the car flipped on the frontstretch during the Roar Before the Rolex 24 test last Saturday morning. The car came to rest in Turn 1 upside down.

Now the Doran Racing crew is taking center stage as it works hard to make repairs and have the car ready for the first official practice session for the Rolex 24 at 9:25 a.m. next Thursday, Jan. 22, at Daytona.

In reviewing the data after the crash, it's clear that the right-rear tire was losing air prior to the accident, which caused the car to become unstable and the accident to occur,

Kevin Doran, owner of Doran Racing, which fields the car for Fifty Plus Racing, said the accident was likely caused by the car running over debris and puncturing a tire, and not driver error or the failure of a suspension piece that was blamed during speculation by certain media outlets.

"In reviewing the data after the crash, it's clear that the right-rear tire was losing air prior to the accident, which caused the car to become unstable and the accident to occur," Doran said. "It was not a case of driver error or suspension failure. Most likely the car picked up debris somewhere around Turn 6, causing the loss of air pressure in the right-rear tire and the subsequent accident."

"The car was stripped on Monday," Doran said late Tuesday afternoon. "The roll-cage is 100 percent intact and held up well, but there was damage to a few tubes when they were ground down when the car was upside down, sliding along the pavement. We're replacing three tubes due to that grinding. Right now we're just waiting for the trucking company to deliver the cage kit from Riley.

"It's going to be a last-minute effort because there was quite a bit of damage; the car spun and hit the wall prior to it getting airborne," he explained. "The important thing is that Byron is OK. He was sore on Sunday but he walked away, and as everyone says, if this had to happen it's better it happened during the test than during the race.

"I'm very proud of how everyone on the team is responding to the challenge," he added. "They are working hard and everyone is staying positive. They really want to be in the race and help raise money to fight Alzheimer's."

Fifty Plus Racing uses motorsports to raise money for Alzheimer's research. Fans can learn more about the effort through the team's Web site at FiftyPlusRacing.com or on its Facebook page. Donations towards Alzheimer's research can be made through credit cards or PayPal through that Web site or by texting ACDC to 51555. ACDC is in reference to the rock band AC/DC. Its front man, Brian Johnson, is a driver for the team but he'll miss competing in the Rolex 24 this year due to obligations stemming from the band's upcoming tour.

Joining DeFoor behind the wheel in the 53rd annual Rolex 24 will be Jim Pace, David Hinton and Dorsey Schroeder. The latter is making his return to the cockpit after many years as an expert commentator for racing telecasts.

"We were having a good test before the accident," Doran said. "Dorsey took to the car quickly. Everybody was comfortable in the car, and we were ready to work on trying to get faster. We were actually bedding in our second set of race brakes when the accident occurred."

In addition to the Rolex 24 on Jan. 24-25, Fifty Plus Racing also plans to enter the three other TUDOR United SportsCar Championship races that make up the 2015 Tequila Patrón North American Endurance Cup. They include the 63rd annual Mobil 1 Twelve Hours of Sebring Fueled by Fresh From Florida in Sebring, Fla., on March 21; the Sahlen's Six Hours of the Glen June 28 at Watkins Glen International in Watkins Glen, N.Y., and the Petit Le Mans Powered By Mazda at Road Atlanta in Braselton, Ga., on Oct. 3.

The Rolex 24 will be covered live in its entirety on FOX, FOX Sports 2, FOX Sports 1 and IMSA.com. See the later Web site for broadcast times.