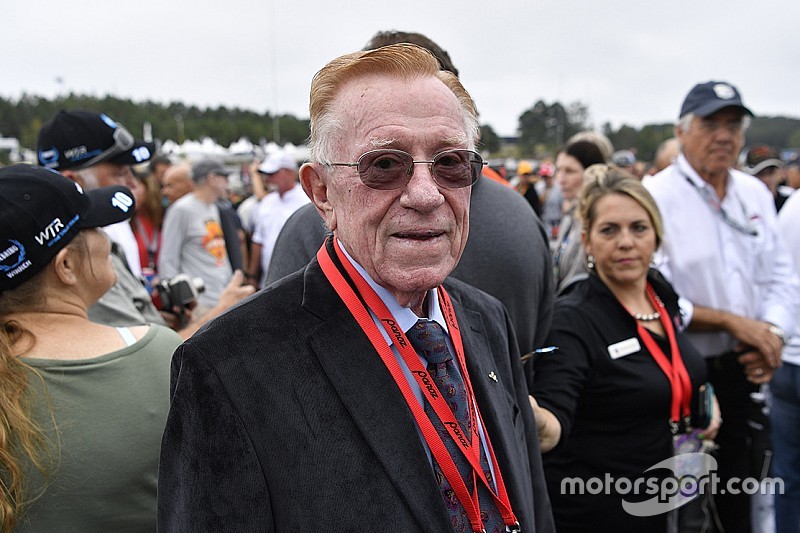 Don Panoz, entrepreneur, maverick and legend of sportscar racing, has died. He was 83.

An official statement from Panoz LLC said: "In the early hours of this morning, Tuesday September 11, 2018, Don Panoz peacefully passed away at his home in Duluth, Georgia. After a short battle with pancreatic cancer, he enjoyed his last cigarette and said goodbye to the world in the early hours of the morning, surrounded by his loving family.

"Possibly most widely celebrated for saving sports car racing in North America or inventing the dermatological patch, ironically so for those that knew him and his smoking habits, the technology behind the nicotine patch, Panoz was a man known for questioning the norm. If someone told him ‘no’, he told them ‘yes’. This was the personality and the motivation behind the man, that can safely be said, has left a legacy of success and technological developments, not just in one industry, but across many."

Panoz, son of an Italian immigrant – Eugene Panunzio – came to the U.S. in the first decade of the 20th century, initially made his name in the pharmaceutical industry, researching the transdermal patch. Following a split with his original business partner, the company Panoz formed in Ireland, Élan Corporation, came to hold the patent for the nicotine patch. Élan was the first Irish company to be listed on the US stock market.

Panoz returned to America in 1980, and in the early 1990s, he set up the Château Élan Winery and Resort in Braselton, GA, by which time he was also backing his son Dan’s fledgling company Panoz Auto Development. In 1996, Panoz bought Road Atlanta and soon embarked on bringing the 26-year-old course up to FIA safety specifications with some major modifications that managed to maintain the spirit of the original 2.5-mile course.

Panoz Motorsports was founded in 1997 at Braselton and immediately won over fans, young and old with the wild-looking Esperante GTR-1 made in conjunction with Reynard, that situated a 6-liter Roush Ford unit in the front of the cockpit and took on the more conventional prototypes with moderate success in the FIA GT championship of the time.

In ’98, in the United States Road Racing Championship’s GT class, the car evolved into a genuine contender that could tackle the Porsches. It scored three wins in USRRC, while in IMSA’s GT category, Panoz clinched seven of eight wins, earning Panoz LLC the constructors’ and teams’ championship.

Meanwhile, Panoz’s increasing love of sportscar racing – one of the few categories of the sport where free-thinking design concepts were still encouraged – led to him founding the 10-hour Petit Le Mans race at his local track in 1998, and forming the American Le Mans Series in time for the 1999 season, adopting the Automobile Club de l’Ouest’s rulebook for the 24 Hours of Le Mans. A partnership with the ACO meant that top ALMS teams gained automatic entries in the legendary French race.

Panoz Motorsports won that inaugural ALMS title with the open-top version of the Esperante, know as the Roadster-S, beating BMW, Dyson Motorsports’ Riley & Scott MkIII and privateer Ferrari 333SPs, and it eventually retired with a total of eight wins to its name.

The GT-spec Esperante – which, very much in its favor, resembled a 21st century interpretation of Colin Chapman’s original late ’50s Lotus Elite – brought the company two high-profile GT2-class wins in 2006: there was victory at the Sebring 12 Hours with the Multimatic team, and then triumph at Le Mans 24 Hours with LNT.

Sportscar categories were by no means the only high-profile category in which Panoz triumphed. Following its purchase of the G-Force company Panoz transferred the company's construction of Indy cars to Braselton under the Elan Motorsport Technologies Group that by now also included the legendary Van Diemen marque. Panoz took on Dallara as a chassis supplier for the Indy Racing League and won the Indianapolis 500 in 2003 (Gil de Ferran, Penske) and ’04 (Buddy Rice, Rahal Letterman Racing).

Panoz was also selected by the Champ Car World Series to be the spec chassis supplier for the series in 2007, replacing Lola in what would proved to be the CCWS’s final season. Sebastien Bourdais, who had coincidentally also been part of Panoz’s winning lineup in the Esperante at Sebring in ’06, would become the marque’s final champion in open-wheel racing, driving the handsome DP01 for Newman Haas Racing in 2007. When the IRL took over Champ Car to form the IndyCar Series for 2008, the DP01 was rendered obsolete, Will Power scoring its final win in that year’s Grand Prix of Long Beach.

When IndyCar announced there would be a new spec car for the 2012 season, Panoz, always with an eye for the unconventional, proposed the Ben Bowlby-penned DeltaWing as the new spec chassis. It had a body shaped like a Land Speed Record car, but with a very narrow front track in order to reduce frontal area and thus generate typical IndyCar speeds from a small-capacity engine of far less horsepower, while relying primarily on underbody aerodymamics to create downforce.

The car was regarded by IndyCar as being too ‘outside-the-box’ and chose the Dallara DW12 instead, and so Panoz LLC turned its focus to adapting the DeltaWing into a two-seat sportscar to be constructed by Dan Gurney’s All American Racers run by Highcroft Racing, and with Nissan badging the Ray Mallock developed engine.

Entered into the 2012 Le Mans 24 Hours under the “Garage 56” rules for experimental cars, the DeltaWing set a pace that made it reasonably competitive in LMP2 before retirement due to contact with another car. In that year’s Petit Le Mans, it finished fifth.

Panoz took over the whole project again in 2013, developing a closed cockpit model with Mazda power for the ALMS series, scoring another fifth place at Road America. Following the merger of the ALMS with Grand-Am for 2014, the coupe DeltaWing scored fourth at Petit Le Mans, and in 2015 took sixth at Road America, but the car was dogged by reliability issues. In the 2016 Rolex 24 Hours at Daytona, the DeltaWing managed to lead 29 laps but suffered an accident, but more usually it was unreliability that dogged the project.

The far more conventional Avezzano, Panoz’s current GT car with clear visual links back to the Esperante, has been one of the strongest forces in the Pirelli World Challenge’s GTS class, Ian James winning regularly for Team Panoz Racing, and finishing second in the championship last year. This year, Panoz clinched the GTS SprintX Manufacturers' title.

The Panoz statement concludes thus: "From the military, to the pharmaceutical industry; from the winery, golf and resort industry through to automotive, motorsports and manufacturing, Panoz has left an imprint of advancing technologies and producing outcomes no one would have thought possible.

"In his own words, Panoz endured a few nightmares along the way, but it can safely be said, the dreams outweighed all the way up until the end…

"In addition to all the career, business and work achievements, Panoz was a family man, a comedian, an inspiration, a philanthropist, an innovator, a visionary and most importantly a wonderfully entertaining human to be around.

"Details of a service at this time are unknown. In lieu of flowers, the family have asked that donations be made, details of a preferred charity to be confirmed."

Gerard Neveu, CEO of the FIA World Endurance Championship tweeted: "We’re all sad to learn about the passing of Don Panoz, a huge figure in the US endurance racing. I’ve never met a bigger fan of sportscar racing and more importantly he was a genuinely good person. We will really miss him and send all condolences his family. Respect Don."

President of the ACO, Pierre Fillon, stated: "I am especially moved and saddened today. At the last edition of the Le Mans Classic, I had the privilege of driving the 1998 Panoz Esperante GTR-1 at the 24 Hours circuit. The car was a stunning sight, but at the wheel, it went to a whole other level. I expected something exceptional, and it did not disappoint.

“I shared my experience with Don Panoz immediately, sending him a photo and a message, because we've always been close, partners and teammates in endurance. I was proud and happy to be able to express my friendship and respect for him once again.

“This photo was one of many examples of our shared passion. Not only could we talk about the discipline, these outstanding cars and remarkable men for hours just for fun, but like me he worked on behalf of this sport.

“Since the inception of the American Le Mans Series, the ties between the U.S. and the ACO have strengthened. Don Panoz was the great ambassador of that relationship.

“After a very successful and cutting-edge career, Don Panoz may have become involved in cars and motorsport somewhat accidentally, but he stayed for a reason. Having become a fan, he applied his business acumen to the sport with his legendary trail-blazing flair.

“He was just recently working on a Garage 56 project. He was always a step ahead. We shall miss the man as much as his expertise. On behalf of the ACO, I would like to extend my warmest condolences to his family and loved ones."

Greg Gill, president/CEO of WC Vision and Pirelli World Challenge, added: “We are deeply saddened to learn of the loss of Don Panoz. He and his organization did more for sportscar racing than any other.

"His Panoz Avezzano GT4 sports car won 13 GTS/GTSA races in the past two years in the Pirelli World Challenge and the Panoz Company captured the 2018 GTS Manufacturers' championship in GTS, a tremendous achievement.

"Don always had fresh insight alongside a warm sense of humor about our industry and the sport. He will be sorely missed.”