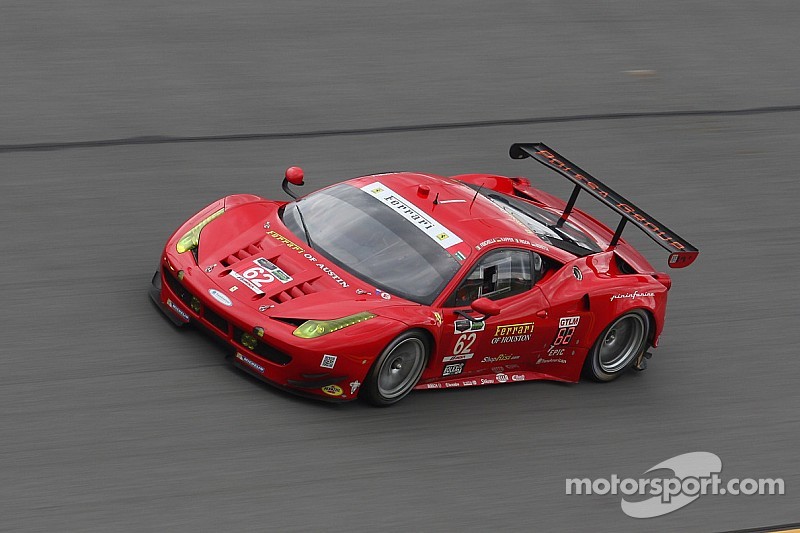 Pierre Kaffer, Giancarlo Fisichella and Oliver Beretta were all GTLM class leaders during the highly competitive 11 hours they were on track.

Daytona Beach, Fla. - The No. 62 Risi Competizione team and its Ferrari F458 Italia had a strong run and stayed atop the GTLM class leader board in the Rolex 24 At Daytona until just before the 11-hour mark when an electrical engine misfire problem caused the Ferrari team to retire.

Pierre Kaffer led for multiple laps during a hard-fought night-time stint, before the Ferrari suffered an electrical misfire on Lap 310 while leading, which required a visit to the Risi garage for assessment. After nearly 30 minutes of analysis by the Risi and Michelotto (Ferrari's GT engine builder) engineers and management, the Risi Competizione Team retired due to an electrical misfire at approximately 1:10 a.m. EDT.

Pierre Kaffer, Giancarlo Fisichella and Oliver Beretta were all GTLM class leaders during the highly competitive 11 hours they were on track. The three drivers led in class for a total of 50 of 310 laps.

Rick Mayer, race engineer, No. 62 Ferrari F458 Italia: "We had a misfire that we couldn't easily diagnose. We still haven't really sorted it out. We tried changing the spark plugs and the coil packs, which are the simple things. We tried all the ECUs and all the different recovery positions on the controllers and none of that fixed a bad misfire. The data says there's something in the left bank that's not correct. Michelotto is confident it's an electrical thing and not a mechanical thing in the engine.

Changing an electrical loom would take hours and we don't feel going back out thirty, forty or fifty laps down would give us any chance of finishing well and it doesn't make sense to waste the resources just to pound around. In our position, there isn't really a win for us if we don't place well. It just doesn't make sense for us so unfortunately we are going to have to retire the car."

Dave Sims, team manager, No. 62 Ferrari F458 Italia: "We think it's the chassis loom. Something on the left hand side of the electric. So, at the point where we said we'd go out, we were already over 20 laps down, we knew we couldn't do it. Because it would take a couple of hours to fix and a lot of money to basically go nowhere, so there's no point in doing it"

What was the first inclination that there was something wrong? "It was a big shame! At the moment I am very frustrated. I think we did a very good job and made everything perfect before the race. I am so sad for the boys; they really deserved it. For me it was really exciting to drive this race and I think the GTLM class is a very nice class. You need to keep an eye on it and especially with what happened with us. I lost some power on the straight to the 'bus stop' and there was a strange noise in the engine so I decided to pit straight away. Unfortunately, we cannot fix this problem and so we have to stop. It's not a good start to the season and we were thinking something else, but now we will have to stick together and we have to do better in Sebring."

They kept you in the car for a long time. What were they checking on? "We checked the spark plugs. We thought maybe one spark plug had failed, but it could also be the injector. To change the injector is a big job and it's not possible to change it in 10 minutes and so right now we decided to stop. It's a shame for Ferrari, Risi, Giuseppe, and the whole world."

How was your stint and battling it out with the Corvette? "Well the Corvette team is very strong and so is Risi. At that level everyone is very professional and I had a good time with the Corvette fight. It was out and clean and stayed like this until the end of my first stint. My problem was on the re-start, I got stuck in the traffic with a PC and could not overtake it. I lost a lot of time but the race is still very long and the car is strong."

Unfortunately, his words did not hold true as the Risi team retired 63 laps later.

In other news, Risi Competizione collected three points, out of a possible five, for the first 6-hour award segment towards the IMSA Tequila Patron North American Endurance Cup year-long championship. The points are awarded for certain hourly intervals at the Rolex 24 At Daytona, the 12 Hours of Sebring, the 6 Hours at Watkins Glen and Petit Le Mans.

The next race for Risi Competizione is the IMSA TUDOR United SportsCar Championship Mobil 1 Twelve Hours of Sebring Fueled by Fresh From Florida, March 18 - 21, 2015.