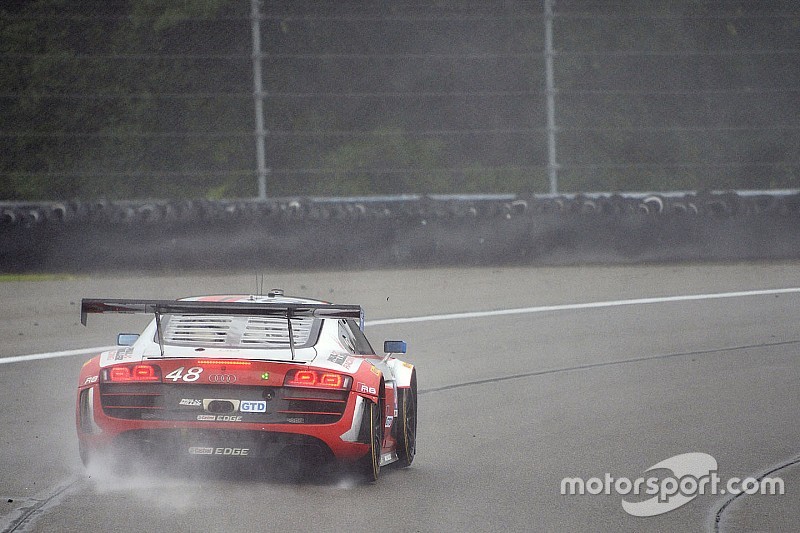 When you say, “Watkins Glen International” to any driver I guarantee you will see their face light up with a smile.  With new boring racetracks popping up all over the world, the old school nature of Watkins Glen makes it a highlight on the calendar.

This track is very fast, very technical, and the weather is usually very unpredictable as we were reminded of this weekend. The 6 Hours of Watkins Glen was not only the third round of the Patrón North American Endurance Championship, but it was also the halfway point of the Tudor Championship.

It is a critical race to kick off the second half of the championship, and we have seen for many seasons that those who do well at this race usually do well in the year-end championship.  With all of this on our minds at Paul Miller Racing, we came to Watkins Glen very focused on getting a good result as well as just excited to be racing in front of the very passionate fan base that this track has.

This weekend we welcomed Bryce Miller back onto our team as he is with us for all of the endurance races.  While three drivers makes raceday less physical since you can split up the driving time more, it makes practice difficult to evenly split because of limited track time. This weekend we were welcomed by beautiful sunny weather on Friday, but the next couple of days did not look as good.

We knew Saturday was going to be very wet, but Sunday looked like it could go either way. This meant Friday practice in the dry would be very important to be as efficient as possible in to get as much track time as possible.  When you finally breakthrough to professional racing you quickly learn that track time is a premium, and you don’t get much of it. Out of all of the practice on Friday I did 5 fast laps, the rest of what I did was slow speed scrubbing tires for race day.

With a wet day on Saturday, I knew that this would probably be all I would get before we raced on Sunday. As it turned out, it was actually the last time I would drive until I was getting into the car with 4 hours remaining in the race! Being able to learn the track, and adapt to the car you have quickly is a skill that is vital for any driver looking to make it to the professional level.

The rain came very hard Saturday and qualifying had to be cancelled unfortunately, but it benefited us because we would start on pole based on championship points.  It was still a shame for the fans that showed up in the conditions to watch us qualify. Most of Saturday was spent looking at the weather forecast for Sunday, which was changing every hour, when we went to sleep Saturday night we really did not know what to expect for raceday.

We awoke to semi-wet conditions on Sunday. The morning warm up was held on a still very wet track but it was drying quickly.  There were 2 hours from the end of warm up to the start of the race and we needed to figure out which Continental tires we wanted to start on. Chris would start the race and then Bryce would drive, then it would be me and Chris back in to finish the race, this meant Chris was the one with the final call on which tires he wanted for the start of the race. We waited right up to the 5-minute call to decide on dry weather tires for the start of the race, but in typical Watkins Glen style as soon as he left on his recon lap the rain started to fall.

This set the trend for the entire day. Chris did a great job keeping the car at the front and pitted within the first hour to give the car over to Bryce who did a single stint. Bryce kept the car clean, on the lead lap and in the top 10, which was perfect.  He pitted 2 hours into the race and it was my turn to get behind the wheel.

At this point it was mostly dry, as it hadn’t rained for the last hour or so. My first stint was a very hard battle with a train of cars from second all the way back to 11th. After the first hour we pitted under yellow flag and after our pitstop we jumped up to fourth from sixth place thanks to a great pitstop from our guys. The next stint was one of the most difficult stints I have ever driven in. About 15 minutes into my second stint we were hit in the rear by the Weathertech Porsche, which cost us a lot of time; but we were still on the lead lap.

Once I got going again I had a vibration on the right rear that I had to try and diagnose and determine if it was okay to keep going without pitting. At this same moment it started to rain on the back half of the track.  Without much confidence in the car I had to take it really easy in the semi-wet conditions until I knew the car was fine.  For the final hour of the stint the rain came and went on different corners. Every lap, each corner had a different amount of grip than the lap before.

Right as my stint was about to end the rain got very bad everywhere except for the first 4 corners, which once again made the choice of tires very difficult. We decided to stay on dries because earlier in the day the rain came but then went away quickly. This rain was here to stay though, four laps later Chris had to pit again for rain tires. He rejoined in 10th place and just outside of the lead lap, quickly though he passed the leader to get our lap back and 2 laps later a full course caution came out. A little good luck never hurt anyone!  After a short red flag the race restarted with an hour to go in very wet conditions. Chris was able to work his way past a few cars and by keeping the car on track, all of a sudden we found ourselves taking the checkered flag in 3rd position.

In practice and the race we never really had the speed of a top five car, in fact in the race we only set the ninth fastest race lap but thanks to great work from my teammates and team we were able to achieve a great finish and great points. Now we have three weeks off until our teams home race at Lime Rock Park.

On July 18th we have an event at the Paul Miller Audi dealer, which will be a great time for anyone who can make it out to it! I will be working hard to make sure I am in great shape for Lime Rock Park. My new partner Aim Higher Crossfit is where I will be training, and for anyone in Miami you can come join me for a workout and check out this new great facility!

Dion von Moltke is the driver of the Paul Miller Racing #48 Audi in the TUDOR United SportsCar Series, and is a regular contributor to Motorsport.com