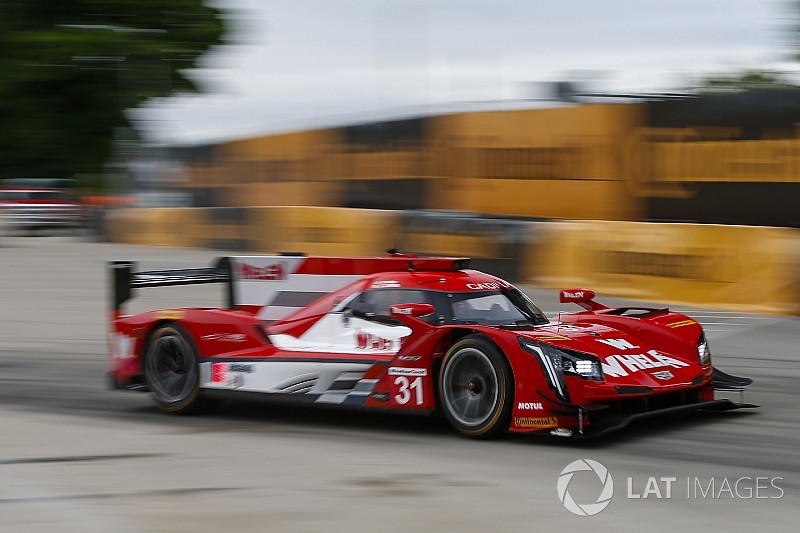 Felipe Nasr and Eric Curran stormed to victory for Action Express Racing in the Belle Isle IMSA race, out-strategizing Team Penske, but Acura got a major consolation prize with an NSX 1-2 in GT Daytona.

Yet on Lap 3, suddenly Derani was falling back with an apparent steering issue, and was pitted on Lap 5. Just a couple of laps later, Jonathan Bomarito's Mazda was slowing with a broken driveshaft.

A full-course caution to clear debris on the back straight bunched the leading Acuras together, and sent almost all the lead cars to the pits. Barbosa however stayed out, vaulting from third into the lead ahead of Jon Bennett in the CORE Autosport Oreca and Derani, who’d returned to the track on a mission.

The ESM Nissan took second on the restart, while further back the #6 Acura, now driven by Dane Cameron, nudged Robert Alon’s JDC-Miller Oreca into a spin at Turn 3. No action was taken.

Misha Goikhberg in the other JDC-Miller car ran third after the restart, ahead of Sebastian Saavedra in the Ligier of PR1/Mathiasen Motorsports, Ricky Taylor having taken over from Castroneves in the #7 Acura, Ryan Dalziel in the #2 ESM Nissan, and Cameron.

On Lap 27, with just under an hour left to run, Cameron got around the Nissan of Dalziel, who had to turn his attention to his mirrors, which were full of the AXR Cadillac of Nasr and Tristan Nunez in the sole remaining Mazda.

Barbosa pitted from the lead with 48mins remaining, handing over to Filipe Albuquerque, while out on track, Taylor levered his way past Saavedra’s Ligier to gain third, the latter of whom then stopped.

Taylor’s third became second on Lap 37 as Derani pitted to hand over to Johannes van Overbeek, so now only Goikhberg stood in the way of an Acura 1-2. Taylor’s pursuit of the Gainsco JDC-Miller car ended when Goikhberg pitted at the end of Lap 38 to hand over to Stephen Simpson.

The Acura’s lead over Nasr’s AXR Cadillac was 47sec at this stage, so Penske pulled in Cameron for his second stop for fuel only. Still, it wasn’t enough to avoid Nasr dashing past into the lead.

Taylor, when he stopped from the lead a lap later, got four new Continental tyres, but Nasr hit the front and now led by 4.5sec. With half an hour left, that lead was up to 6sec.

It wasn’t until with 20mins to go that Taylor’s newer tires started to allow him to pull away from teammate Cameron, but it was barely enough to pull him any closer to Nasr, until GT Daytona cars got in the way of the ex-F1 driver, cutting his lead to 3.5sec.

But then it was the Acuras who encountered the same issue, and that allowed Oliver Jarvis to move his Mazda onto the tail of Cameron.

Albuquerque and Simpson ran fifth and sixth, but when Simpson tried to pass the AXR Cadillac, Albuquerque appeared to pushed him into the GTD car – Kyle Marcelli’s #14 Lexus – that they were lapping, damaging the Oreca’s tail, forcing an extra stop for the JDC-Miller entry.

Intriguingly, Simpson was regarded as the perpetrator and was issued with a drive-through penalty.

Up front in the closing 10mins, Nasr appeared to have everything under control despite having made only one pitstop. He ran five seconds ahead of Taylor, with GTD traffic allowing Cameron back onto his teammates’ tail.

With three minutes remaining, suddenly Taylor had gapped Cameron and closed to within 1.6sec of Nasr. However, the Brazilian paid out the line and drove to the checkers, one second ahead of Taylor, with Cameron falling to 13sec behind.

Bryan Sellers’s Paul Miller Racing Lamborghini Huracan led from the start, but couldn’t shake off the attention of Katherine Legge in the Meyer Shank Racing Acura NSX, who ran just ahead of her teammate Justin Marks.

Meanwhile, Ben Keating was able to insert his Riley Motorsports Mercedes in between the two Lexus RC Fs. When David Heinemeier Hansson hit a tire wall in the second Lexus, Cooper MacNeil moved the WeatherTech Ferrari 488 into sixth place.

Following the first caution period, Legge carried on hanging onto Sellers’ rear wing, but when the round of pitstops began, The third-placed Acura of Marks and Lawson Aschenbach was given left-side-tires only to jump it ahead of the PMR Lambo.

Legge went one lap longer before handing over to Mario Farnbacher, and the #86 Acura emerged ahead of both its teammate and Sellers’ replacement, Madison Snow.

With 40mins still to run, Farnbacher had extended his lead over teammate Aschenbach to 4sec, with Snow a further 2.5sec back, and they were fueled to the flag.

The Acuras ran 1-2 to the checkered flag ahead of Snow/Sellers, with Jeroen Bleekemolen taking over from Keating to take fourth ahead of Jeff Segal, who kept the WeatherTech Ferrari 488 ahead of Marcelli’s Lexus.