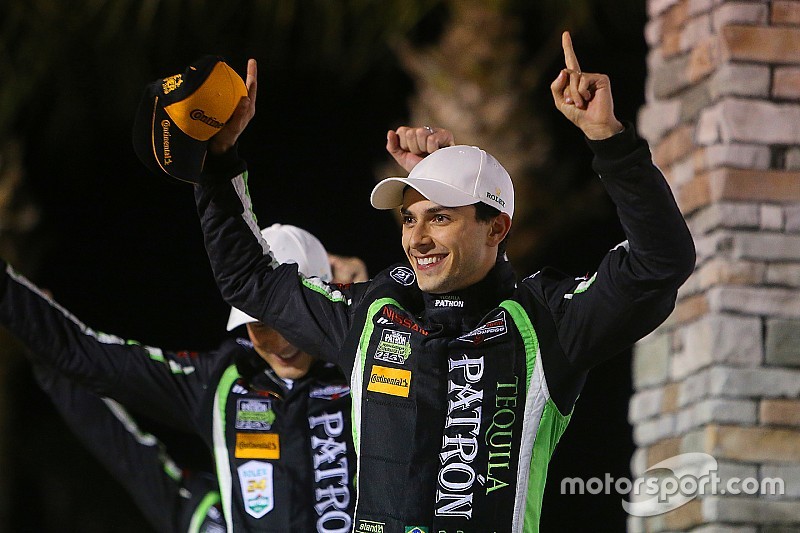 Pipo Derani has dedicated the ESM team’s victory in the 66th Sebring 12 Hours to his father after he, Nicolas Lapierre and Johannes van Overbeek captured the squad’s second win there in three years.

The second round of the IMSA WeatherTech SportsCar Championship saw the ESM Nissan regularly able to edge away from even its closest rivals, including the fastest Cadillacs, Mazda RT24-Ps, and Penske-Acuras. Crucially, the #22 crew also provided slick pitstops.

Said Derani: “Just unbelievable. It’s the second victory [here] in three attempts. From 2016 [victory], to having a problem last year, and coming back to win is just amazing.

“This victory goes to my dad who is watching us back in Brazil and is fighting for his health. I’m just so happy to be able to win and know that he’s watching my race.

“I just have to thank the entire team for giving me this opportunity to win again and win in front of him.”

The similarly impressive Lapierre added: “What an amazing day at one of the toughest races in the world. It was a really special day. It was a really great job from everyone on the team:  the strategy, the setup of the car, the team in the pit stops, and my teammates on the track.

“Everything was perfect today, and we made no mistakes. We weren’t lucky in Daytona, but we fought back hard to be here. I’m really proud of everyone.”

Team manager and co-owner Sharp said: “We needed this so badly. We were really heartbroken after Daytona. To win a major endurance race is humongous. We needed this as a team, and we needed this for Tequila Patron.

“It looked a little bleak after the first lap [when his own #2 car was damaged in an accident] but that’s why we have two bullets in the gun.

"These guys just did a great job and with flawless moves. The pit stops were great, the car performed, and Nissan did a fabulous job.”