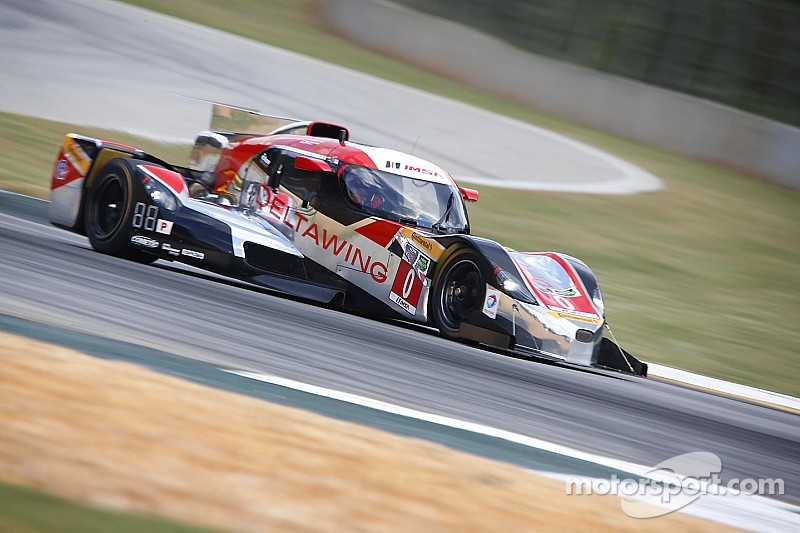 Katherine Legge had only three laps at Road Atlanta for qualifying.

Katherine Legge made the most of only three laps of qualifying today, clocking the DeltaWing coupe’s quickest lap of the weekend en route to a season-high fifth place starting position for tomorrow’s 10-hour Petit Le Mans at Road Atlanta.

The 15-minute TUDOR Championship Prototype class qualifying session was lengthened due to several incidents which caused extensive red flags, as the rule book stipulates that each class be allotted a minimum of 10 minutes of green flag running during qualifying. In the end, that time allowed for only three timed laps and despite a near-incident with another prototype on her final lap, Legge brought the revolutionary coupe home with a lap time of 1:15.317.

The team has experimented with several new aerodynamic additions this weekend, including a front splitter and a rear tail fin. Legge was happy with the car’s handling and performance, though disappointed with the qualifying result.

Legge even hoped for better

Said Katherine Legge: “We thought we could be battling for pole, so it wasn’t as good a result as we had hoped. It was an unfortunate session for everyone, because we only got three laps in. The last lap was marred by another car who tried to drive into the side of me going into turn 10, or we could have started even higher. We’re developing the car all the time and it did feel like we’ve made a big forward step. I think we have a good race car for tomorrow. This is our hometown race, so we want to do well in front of friends and family. If we’ve got the reliability as good as we have the performance, I think we’ll be fighting for the podium.”

Petit Le Mans, the final race of the inaugural TUDOR United SportsCar Championship, takes the green flag at 11:15am ET Saturday. IMSA.com will carry the race in its entirety, with FOX Sports 2 joining the race at 3:00pm ET. A two-hour race recap will air on the main FOX network on Sunday (check local listings). For news, photos and features, follow DeltaWing Racing Cars on Twitter, Facebook, YouTube and DeltaWingRacing.com.