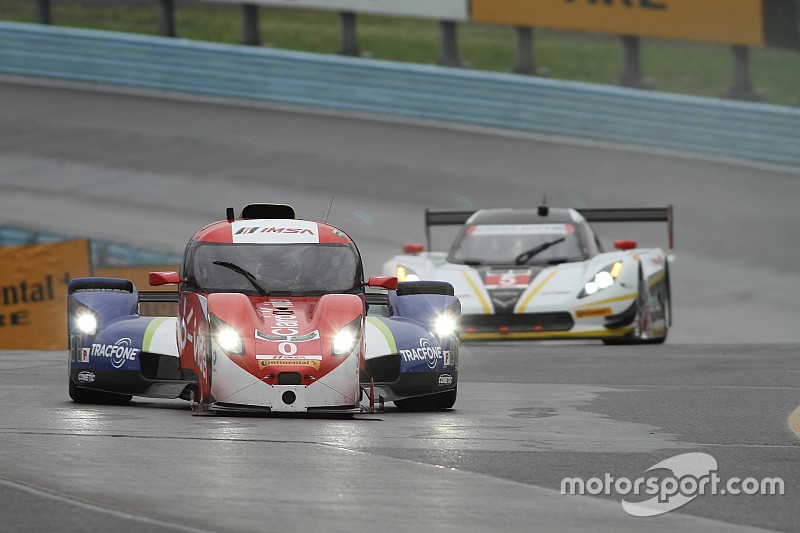 DeltaWing Coupe runs in the top five early as Mother Nature adds a storyline to the third leg of the Tequila Patrón North American Endurance Challenge.

Watkins Glen, N.Y.  – The Claro/TracFone DeltaWing Racing Cars team continued its development process today, with the DeltaWing Coupe running in fifth position for much of the early going before gearbox issues and Mother Nature ended the day in the Sahlen’s Six Hours of The Glen, race three of the Tequila Patrón North American Endurance Challenge.

The DeltaWing coupe started the day in eighth position, as rainy conditions on Saturday prompted TUDOR United SportsCar Championship officials to cancel qualifying and grid cars based on points. The team rolled the dice on rapidly changing weather conditions this morning, choosing to start the race on rain tires, as showers remained in the area. Memo Rojas took the green flag, with the team planning on triple stints for both Rojas and Katherine Legge, to minimize time in the pits.

...we ran well for two and a half hours, so we can take that going forward.

Rojas stayed on the lead lap as the track dried, with the team switching to slick tires on the first pit stop. Posting the team’s quickest time of 1:42.383 on lap 54, Rojas held fifth position for much of his stint. Legge took the wheel with just over three hours remaining, but experienced a shifting problem almost immediately, caused by a shifting compressor issue.

Heading back to the paddock, the team performed quick and efficient repairs to get Legge back on track, intending to use the remaining laps as a test session. However, the skies opened once again and with deteriorating conditions resulting in a red flag with an hour and a half remaining, the team withdrew the car from competition, finishing eighth in the Prototype Class..

The DeltaWing team heads north in two weeks for the Mobil 1 SportsCar Grand Prix Presented by Hawk Performance at Canadian Tire Motorsports Park, northeast of Toronto, Ontario, Canada. Qualifying will be live on IMSA.com Saturday, July 11 from 4:40 to 5:45 p.m., with the race live on FOX Sports 1 Sunday from Noon to 3:00 p.m. All times Eastern.

Memo Rojas: “It was tough in the beginning, with the uncertainty about the weather. We started on rain tires while most of the other cars were on slicks. That worked early on, but we lost some ground once the track started drying out. It was a good stint: I had some good battles out there and the car had consistent pace. It’s a learning curve with new technology like this but we keep moving forward. The crew did a great job to get the car back out on track after we had the shifting issues but the conditions were just too difficult for us to really learn anything. It’s a shame; I thought we had a chance at a good finish today.”

Katherine Legge: “As soon as I got in the car, we had the shifting issue so we had to pit straightaway. The crew did a great job of fixing it so quickly. Once it started to rain so hard, the conditions got very difficult. Once the red flag came out, we decided to stop because we didn’t want to wreck when there was really very little to be gained by staying out. It’s very disappointing, but we ran well for two and a half hours, so we can take that going forward.”

Tim Keene: “The race started out well for us and we were in a good, top-five position for much of the early going. We had a problem with the compressor in the shifting mechanism so we went back to the garage to work on it. We got that fixed and went back out, but the rain started and got quite heavy. Being in the position we were in, we didn’t want to risk the car - we wanted mainly to make sure we fixed the shifting issue, and we did. If we could have used the rest of the race as a good test session, we would have, but with that not being the case, it wasn’t worth it. We made the decision to withdraw after the red flag came out and given all the incidents, we’re satisfied with that decision. We’ve made some progress and we have some races ahead that have been good for us in the past, so we’ll keep moving forward.”