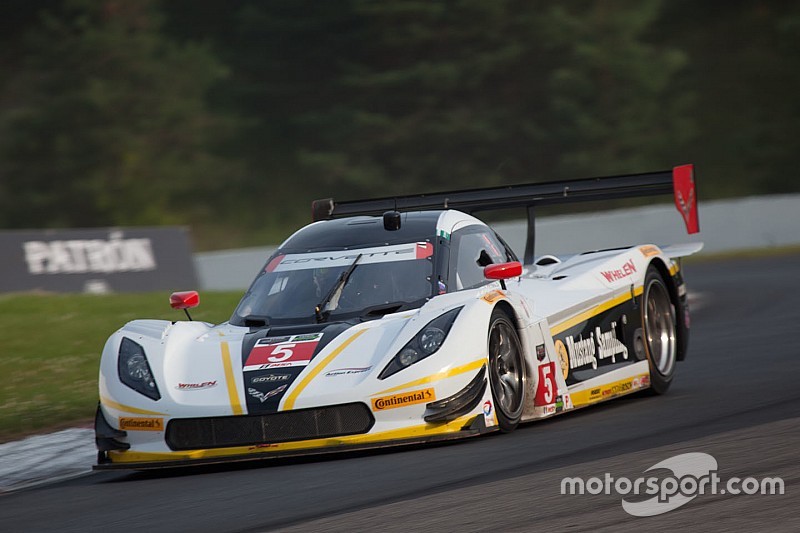 The two-hour, 40-minute race will be televised live on FOX Sports 1 beginning at 3 p.m. ET. Joining the Prototypes are the Prototype Challenge (PC), GT Le Mans (GTLM) and GT Daytona (GTD) classes, the first combined event for the four TUDOR Championship classes since the Sahlen’s Six Hours of The Glen in June.

The co-drivers of the No. 5 Mustang Sampling Corvette DP, are seven points behind Prototype point leaders Michael Valiante and Richard Westbrook from VisitFlorida.com Racing, 221-214. Fittipaldi and Barbosa have placed in the top five in all seven races this season, with their lone victory in the Mobil 1 Twelve Hours of Sebring Fueled by Fresh From Florida. Last year, the duo won three races en route to the Prototype class title.

“We need to win races to compete for this championship,” Barbosa said. “The season comes down to the last three races and we need to finish in front of our main competitors – and that means winning. Our competitors are very strong so we need flawless execution in the last races of the season.”

“I’ve always liked Road America since my first IndyCar days,” said Fittipaldi, who scored his first Champ Car victory at the circuit in 1999. “It’s a fast track and challenging all together. I’ve had a lot of success there and I’m really looking forward to going back. Having previous success at a track you are going back to is always an extra boost, especially if you like the place.”

Action Express Racing’s No. 31 Whelen Engineering/Team Fox Corvette DP of Eric Curran and Dane Cameron is third in the standings, 11 points behind the leaders. They combined to win at Detroit’s Raceway at Belle Isle Park in May, while Cameron also scored a GT Daytona (GTD) class victory in the most recent TUDOR Championship race at Lime Rock Park. Both drivers won at Road America in 2014, with Cameron taking GTD honors while Curran won overall in the Continental Tire SportsCar Challenge.

Ricky and Jordan Taylor are two-time winners this season in the No. 10 Konica Minolta Corvette DP for Wayne Taylor Racing – including the most recent round at Canadian Tire Motorsport Park – and are 15 points out of the championship lead.

Another duo to watch is Michael Shank Racing with Curb/Agajanian’s Ozz Negri and John Pew, who finished second at Road America in 2014, and have scored podium finishes in three of the last four races driving the No. 60 U.S. AutoForce Ligier JS P2/Honda.

Other contenders include Scott Pruett and Joey Hand in the No. 01 Ford EcoBoost/Riley; Katherine Legge and Memo Rojas in the No. 0 Claro Video/TracFone DeltaWing DWC13; and the No. 07 Mazda/Castrol/ModSpace Mazda Prototype of Tom Long and Joel Miller.

Mike Guasch and Tom Kimber-Smith won the most recent Prototype Challenge (PC) race at Lime Rock Park in the No. 52 Cuttwood ORECA FLM09, trimming CORE autosport’s advantage in the championship to three points, 222-219. The PR1/Mathiasen Motorsports co-drivers now have three victories, winning the season-opening Rolex 24 At Daytona and Mobil 1 Twelve Hours of Sebring.

“We’re going to Road America with the same attitude we had going to Lime Rock: winning is what we have to achieve,” Kimber-Smith said. “We will be disappointed with anything else. Winning two in a row is very difficult in this series, but we did it to open the year. We need to finish ahead of the CORE autosport car, and bag as many points as we can.”

CORE autosport’s Jon Bennett and Colin Braun opened 2015 with three runner-up finishes to take the lead in the No. 54 Flex Box/Composite Resources ORECA FLM09, but their lone podium finish in the last four rounds was a victory at Canadian Tire Motorsport Park.

Looking for the local advantage will be James French of Sheboygan, Wisconsin, who joins rising star Conor Daly in Performance Tech Motorsports’ No. 38 Ric-Man Construction/GO-PUCK/Braille Batteries car. French won the TOTAL Pole Award in two of the last four races.

Another team to watch is JDC/Miller Motorsports, which led the opening hour at Lime Rock in the No. 85 UndergroundCellar.com entry before losing several laps with an electrical issue. Mikhail Goikhberg will be joined by Chris Miller in the car this weekend.

Weekend activities open Friday, with a pair of one-hour practice sessions. TUDOR Championship qualifying will be streamed live on IMSA.com and the IMSA mobile app on Saturday, Aug. 8, beginning at 4:35 p.m. ET.

Why Alex Job Racing is sticking with Porsche