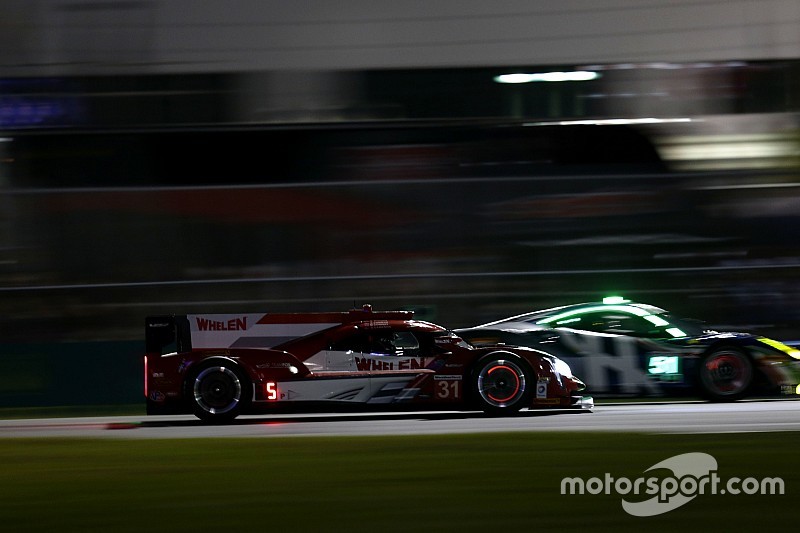 One of the infallible Cadillacs found trouble in the fifth hour, but it wasn't enough to push them down the order.

Eric Curran was leading the race in the No. 31 Action Express Cadillac when he attempted to overtake the No. 88 Starworks PC on the high banks when they collided. The PC slammed the outside wall and forced the fourth full-course-yellow of the race, but Curran was lucky to escape with only minor damage. In fact, he maintained the race lead.

During pit stops under the ensuing caution, Max Angelelli forced Filipe Albuquerque into the grass as they battled off pit road, lining up second and third for the restart.

There was more trouble for prototypes towards the back of the field with the JDC-Miller entry going for a spin and the DragonSpeed machine losing drive in the infield road course.

The No. 66 Ford, driven by Dirk Mueller leads the No. 3 Corvette of Antonio Garcia and the No. 67 Ford of Scott Dixon third. The GTLM class stayed clear of trouble throughout the hour with the top ten all still on the same lap.

Mark Wilkins in the No. 93 Acura NSX has the top spot in the largest class in the field, holding station over the No. 96 Turner BMW and the No. 63 Scuderia Corsa Ferrari.

Prototype Challenge is led by Kyle Masson in the No. 38 Performance Tech Motorsports ORECA.

Gordon on first stint: Restarts "might be crazier than NASCAR"