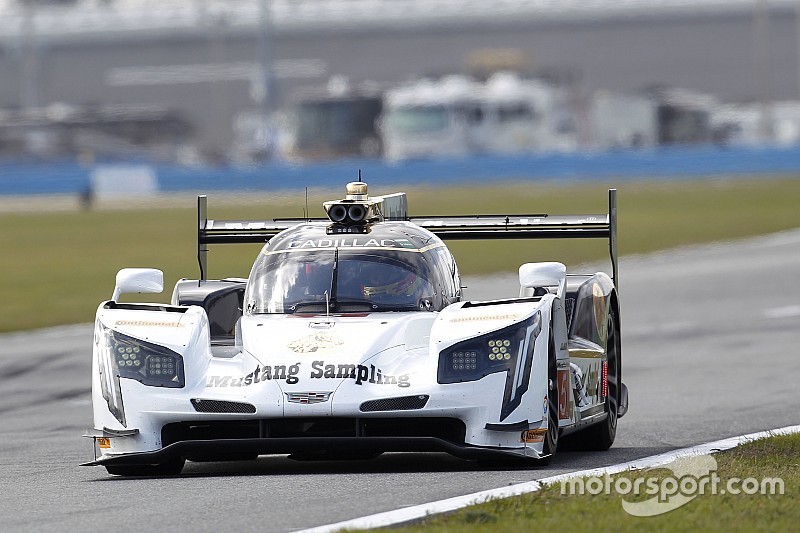 Cadillac maintained its 1-2-3 at the top of the leaderboard in Daytona, with Joao Barbosa slotting the #5 Action Express Racing entry in at P1.

The former champion set a fastest time of 1min38.549sec around the 3.56-mile course to go 0.177s clear of Ricky Taylor in the Wayne Taylor Racing machine, with reigning champion Dane Cameron some 1.6sec adrift in third, driving the second AXR machine.

However, Duval ended the session about five minutes early with a spin and collision, causing significant left-side damage.

In seventh and ninth the two ESM Racing Nissan DPis were split by the fastest of the two Mazdas, driven by Tom Long, which was 3.8sec off the ultimate pace.

Bill Auberlen was an encouraging fourth for BMW Team RLL, half a second off Pla’s best, with Joey Hand and Harry Tincknell fifth and sixth in Fords. Defending Rolex 24 winner Oliver Gavin was seventh in the fastest of the Corvette C7.Rs.

Pedro Lamy was fastest of the Aston Martin drivers in fourth, ahead of Michael Christensen’ s Alegra Motorsport Porsche, and the similar car of Manthey Racing, wheeled by Matteoi Cairoli,

Fastest Lamborghini Huracan was that of Christian Engelhart in the #11 Grasser Racing Team machine, while Jeroen Bleekemolen clocked eighth in the Riley Motorsports-Team AMG Mercedes-AMG GT3, around 1.6sec off fastest in class.