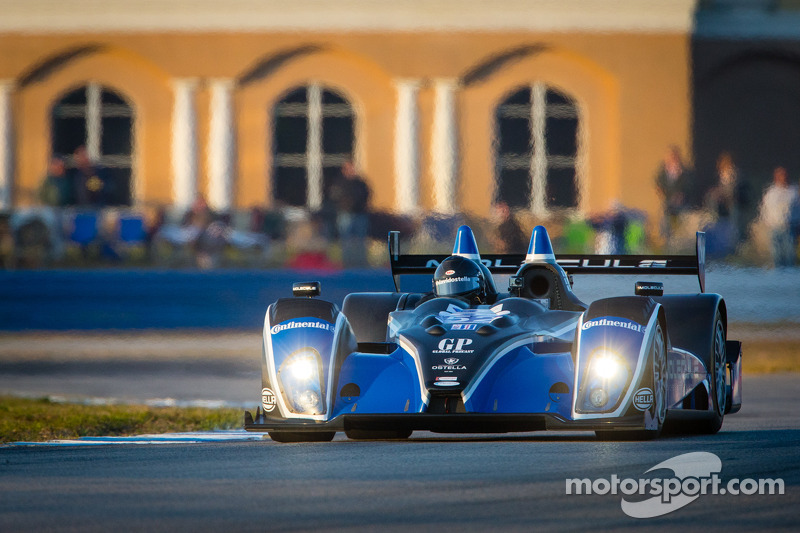 While David Ostella is focusing on achieving his goals in the TUDOR United SportsCar Championship, he also plans to help a special breast cancer survivor achieve her dreams.

Wings of Hope is a charity organization started by breast cancer survivor Anna Rossetti, a close family friend to Toronto-area resident Ostella. Rossetti has followed Ostella's progress in racing over the years while he has followed her personal fight and work to protect others from breast cancer.

Based in Toronto, Wings of Hope raises awareness and funds to care for patients at St. Michael's Hospital in Toronto who are fighting the battle against breast cancer. Over the charity's nine years, a team of women has surrounded Rossetti with support and helped her to raise more than $445,000.

Rossetti's fight inspired Ostella to work with her and raise awareness and more funding for breast cancer. So Ostella has started Dash from Breast Cancer campaign this season as he drives in the Prototype Challenge class of the elite IMSA TUDOR Championship.

The campaign will continue through the end of the race season in October, which is Breast Cancer Awareness Month. In support of Dash from Breast Cancer, Ostella's Performance Tech Motorsports team will wear pink clothing in the pits, host breast cancer survivors at each Prototype Challenge round of the TUDOR United SportsCar Championship, and Ostella's website, www.davidostella.com, will feature a donation page sponsored by Dash Neighborhoods that connects fans to the Wings of Hope donation account. At the end of October, Ostella will present a check to Rossetti and address the audience at the Wings of Hope gala.

Ostella's campaign already is gaining traction in Toronto. St. Michael's Hospital will feature a page on its website in support of Dash from Breast Cancer. The link will take visitors to Ostella's website, where they can find information on the charity and donate.

Ostella's effort has touched Rossetti's heart and ignited her with new excitement for her charity.

"Out of all the charities and causes he could have supported, he chose mine," Rossetti said of Ostella, 22. "When his mother told me David wanted to ask me something, I had no idea what our conversation would be about. When we sat down and he told me that he wanted to help, I was overwhelmed.

"It's so good to see young adults getting involved in something that may never affect them, or would at least not affect them for 20 or 30 years. At David's age, I never would have thought that I would be faced with cancer. So it truly is inspiring to see him so vigilant and aware.

"Having the younger generation involved continuing the work ensures that they too face a chance. It's so important that they carry this on. We're to the point where we can buy the new equipment, but we have to expand the message. It's so humbling to know that David wants to help do that, and through his racing. I know the time and effort he has put into his progress."

Wings of Hope is one of four charities Ostella's family has supported over the years. The charity resonated with Ostella because of Rossetti's fight and because he lost his great-grandfather and grandfather to cancer.

"Family is obviously huge to me, and Anna is family," Ostella said. "Realizing what she's gone through and still is going through, it's what has inspired me. I want to be able to grow the campaign and continue what we're doing to keep bringing awareness.

"I'd like to see other people and drivers get involved with Dash from Breast Cancer and even the series. That would be amazing. I want to keep bringing survivors out to the track so they can share their stories. I don't want people to just donate - I want people to want to get involved themselves.

"Cancer is such a tough thing to watch someone go through. My grandfather passed away from it when I was born, and a few years ago my great-grandfather passed away. Cancer doesn't just affect the person with the disease; it affects everyone around them. I'm happy just knowing that I am able to do something."

Ostella will continue to grow Dash from Breast Cancer and support of Wings of Hope through the season by organizing events and making hospital visits in TUDOR United SportsCar Championship event markets. He'll even revamp his helmet design to reflect his dedication to the cause. His first event will be a hospital visit Friday, June 6 at Lawrence Memorial Hospital in Lawrence, Kansas. The patients also will have the opportunity to attend a paddock tour and race at Kansas Speedway, hosted by Ostella.

To donate or for more information on Dash from Breast Cancer, visit davidostella.com.