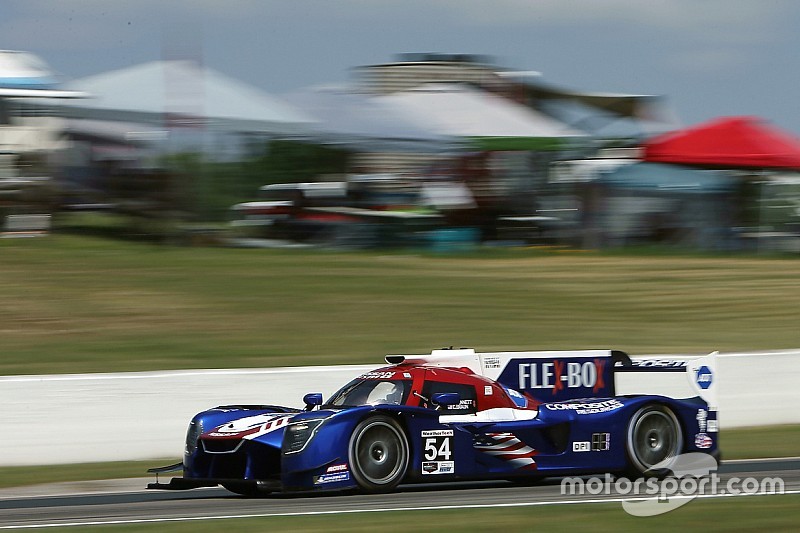 Braun lapped the 2.459-mile course in 65.452sec in the Prototype battle for pole and Castroneves spun his Acura Team Penske ARX-05 at Turn 5 trying to respond, although he held onto his front-row slot.

Jonathan Bomarito was 0.328sec behind in the Watkins Glen-winning Mazda RT24-P, with Juan Pablo Montoya grabbing fourth in the second Acura ahead of the second Mazda of Tristan Nunez.

Felipe Nasr was pinged for exceeding track limits in the #31 Action Express Racing entry but was fastest of the Cadillac DPi-V.Rs, a mere 0.05sec quicker than teammate Filipe Albuquerque.

Jordan Taylor was 0.8sec off the ultimate pace in the Wayner Taylor Racing Caddy, while Simon Trummer was 0.275sec faster than JDC Miller Motorsports teammate Misha Goikhberg, as Will Owen’s Juncos Racing Cadillac was 11th and last.

Ryan Briscoe was fourth in the #67 Ford GT to narrowly edge the faster of the two Porsche 911 RSRs, driven by Patrick Pilet.

The faster Corvette C7.R, that of reigning GTLM champion Jan Magnussen, was left 1.2sec adrift, while teammate Marcel Fassler – subbing for the injured Tommy Milner – was a further 0.474sec down in his first qualifying experience at CTMP.

In the end it was Foley who made the grade, topping the times by a mere 0.081sec with a 1min16.172sec ahead of Keating, while Hindman was just 0.1sec further adrift. This trio finished more than half a second up on the opposition.

Next was Hindman’s teammate in the Heinricher Racing NSX, Ana Beatriz, with Zachary Robichon fifth in the Pfaff Motorsports Porsche 911 GT3-R ahead of Frankie Montecalvo in the faster of the AIM Vasser-Sullivan Lexus RC Fs.

Reigning GTD champion team Paul Miller Racing has sadly had to withdraw its Lamborghini Huracan from the event following Ryan Hardwick’s contact with a JDC Miller Motorsport Cadillac in FP3 this morning that sent the Lambo into the Turn 2 barrier.