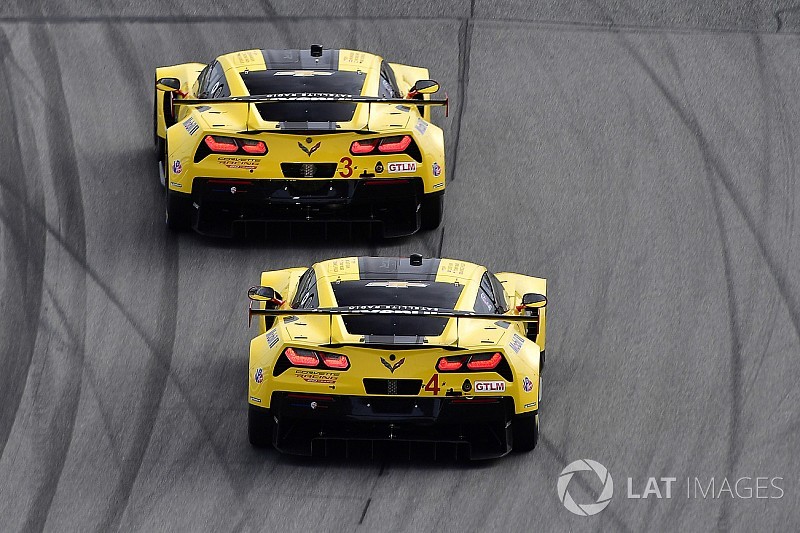 The Corvette C7.Rs were simply lacking the pace of the Ford GTs at the Rolex 24 Hours at Daytona, according to Antonio Garcia, a deficit accentuated by the dearth of full-course cautions.

The #3 Corvette of Garcia, Jan Magnussen and Mike Rockenfeller, and the #4 of Oliver Gavin, Tommy Milner and Marcel Fassler finished third and fourth in the GT Le Mans category but were respectively two and three laps behind the victorious Ford GTs.

Garcia, who with Magnussen is defending GTLM champion, said: “We again didn’t make any mistakes by the drivers, the pit stops were fine – we may have had an unscheduled stop for brakes – other than that, everything worked perfect. We just didn’t have the pace. It was a little bit like what happened a lot last year.

“Our guys did a fantastic job. We showed all we had and gave it all. If the Fords were faster than us, we can’t do anything else but congratulate them. We just didn’t have enough to fight them, especially with the limited number of yellow flags.”

Magnussen concurred, stating: “This year’s race was a lot different than previous years because of the lack of safety car periods. Usually, you had to get the car right for the last three or four hours, and then in the last hour you had to nail it. This year, you had to push the whole way.

“By the end of it, we didn’t have enough, which is a shame because we ran a good race. We ran out of brakes at the end because we were pushing the whole way through, so that’s something we’ll have to look into. It’s the most physical Rolex 24 I’ve ever done.

Their full-time Corvette Racing teammates Gavin and Milner were more content to accentuate the positive, as the 2016 Rolex 24 winners finished only ninth in 2017.

“Yes, we got fourth place today but that’s great points for us,” said Gavin. “Last year we finished ninth here, and it wasn’t a particularly good start for us. But this year we have good fourth place points. It gets us a good start in the championship.”

Added Milner: “[There’s] no better way to start the season by getting both cars to the finish with no problems and no issues. That’s really impressive.”

WEC stars baffled by lack of cautions at Daytona