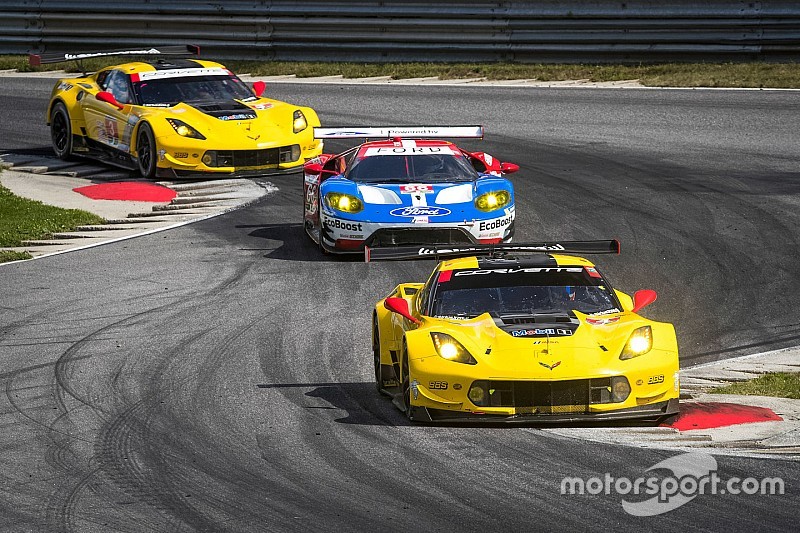 At the start, Richard Westbrook ran the polesitting #67 Ford GT off the course, possibly after a tap from Toni Vilander’s Ferrari 488, although the issue was muddied by the presence of the Prototype Challenge cars.

Meanwhile Dirk Werner took the lead in the #25 BMW M6 with Vilander second, Tommy Milner third in the #4 Corvette C7.R, then Joey Hand in the second Ford GT, Jan Magnussen in the second Corvette, Patrick Pilet in Porsche #911, John Edwards in the #100 BMW and Makowiecki in the #912 Porsche.

This latter pair caused the first yellow on lap 6 as Edwards was spun off course by Makowiecki as the Porsche driver tried to get alongside the M6 on the fast downhill righthander. He wasn’t far enough alongside and turned the Bimmer into the barriers.

Green flag waved on Lap 13, with everyone holding position, but Westbrook still trying to work his way up from eighth in class. Then on Lap 26, Pilet’s Porsche ground to a halt on track, bringing out the second full-course caution and triggering a round of pitstops.

The leading #25 BMW came in for left-side only tires, as Vilander got all four tires and the positions remained the same at the front, but Earl Bamber who’d taken over the 912 Porsche, dived past Hand’s Ford to take fourth in class, while Westbrook moved forward to leave the Fords fifth and sixth. The big loser was the #3 Corvette which got a drive-through penalty for a wheel running amok in pitlane.

Westbrook passed teammate Hand for fifth on Lap 33, before the yellows flew again, for two reasons: the #911 Porsche which had rejoined several laps down, stopped again with fuel feed issues. And there was also chaos when the #85 PC car and the GTD Ferrari came together.

Following the restart, as the GTLM leaders came to lap the #27 GTD Lamborghini, Werner hung back at the chicane, but Vilander chose the moment to muscle the Ferrari through and grab the lead with 94 minutes left in the 2h40min race.

Not long after, Bamber passed the #4 Corvette for third in class, but Milner would not let him go, and was also feeling pressure from behind as Westbrook’s Ford was now all over him. Up front, meanwhile, Vilander had pulled a six second lead over Werner by Lap 88, as the German focused on holding off Bamber’s closing Porsche.

This battle ended in tears, as for the second time, the 912 Porsche took out a BMW M6, by diving late down the inside of the fast downhill right-hander leading onto the straight. The impact was big, the full course yellows flew for the fifth time and this triggered a pitstop flurry.

With a little under an hour to go, Fisichella, now at the wheel of the Risi Ferrari, thus had the #4 Corvette piloted by Oliver Gavin to hold off at the restart, chased by Ryan Briscoe in the #67 Ford GT, and Antonio Garcia in the #3 Corvette which got around the #66 Ford, now piloted by Dirk Muller.

With 45 minutes to go, the Corvette drivers had the bit between their teeth – Gavin pressuring Fisichella for first, Garcia pressing Briscoe for third. However, Muller instead fought back past Garcia, to make the Fords 3-4 with half an hour to go.

The tables turned again on lap 135, when Fisichella went off the course at the end of the pit straight losing the lead to Gavin. On the next lap, the Ferrari went off at Big Bend, and this time Briscoe muscled past the recovering Ferrari, with Muller and Garcia following him through.

Garcia then also chose the momentum-losing moment to pass the #66 Ford and grab third place. Now only half a second behind Briscoe, with fewer than 20 minutes to go, Garcia moved past the car that has won the last three races to make it a Corvette 1-2.

He finishing three seconds adrift of Gavin/Milner, whose third victory of the year was the 100th for the Corvette Racing program since its inception.

Fisichella regained his composure to move past Muller for fourth place on a day that had promised much more, while the Nick Tandy/Pilet #911 Porsche came home sixth in class, albeit eight laps adrift of the leaders.

Robert Alon’s PR1/Mathiasen Motorsports Oreca took the lead at the start as Alex Popow moved from fourth to second in the #8 Starworks car, chased by teammate Jose Gutierrez in the #7, Matt McMurry in the BAR1 machine, Jon Bennett in CORE autosport’s entry and Misha Goikhberg sixth for JDC-Miller.

Alon and McMurry stopped under the second yellow, but their rivals didn’t, leaving Popow, Gutierrez, Goikhberg, French and Bennett in the top five positions.

On the lap 47 restart, Gutierrez ran wide and its rear wing grabbed a trackside advertising hoarding while a collision at the chicane at the 70-minute mark between Colin Braun and the GTD Lamborghini of Cedric Sbirrazzuoli ended CORE’s hopes of victory.

At half distance, Alon led McMurry by 13sec, with Renger Van Der Zande in the #8 Starworks car a further 18sec back.

However, the yellow caused by the Bamber/Werner GTLM shunt, and the subsequent pitstops caused an order reshuffle, as Van Der Zande took the lead in the #8 Starowrks car, ahead of Tom Kimber-Smith now piloting the #52 PR1/Mathiasen car. Johnny Mowlem had taken over from McMurry in the BAR1 car and was now in third, ahead of Kyle Marcelli in the Performance Tech car.

However, that changed in the closing stages, as Marcelli grabbed the final podium position. Kimber-Smith closed rapidly on Van Der Zande but the Dutchman had it all in hand and won by 0.8sec.

At the drop of the green flag, Spencer Pumpelly’s polesitting Change Racing Lamborghini Huracan retained its advantage over the Stevenson Motorsports Audis of Andrew Davis and Matt Bell, with Christina Nielsen’s Ferrari in fourth, Madison Snow in the Paul Miller Racing Lamborghin in fifth and Mario Farnbacher’s Alex Job Racing Porsche in sixth.

A disappointing pitstop for Pumpelly saw the Lamborghini drop to ninth as Cooper MacNeil’s Alex Job Racing Porsche took was at the head of the line on the next restart, ahead of John Potter in the Magnus Racing Audi R8.

Nielsen was then an innocent victim when the PC car of Goikhberg was edged off the track by Farnbacher’s #23 Porsche, spun across the track and tore off the Ferrari’s right door.

Magnus Racing pitted Potter and swapped in Andy Lally on lap 48, with Turner Motorsport also making their driver exchanges in their pair of BMW M6s.

That left the yet-to-stop MacNeil on worn tires trying to hold off Snow’s Lamborghini, with the Stevenson Audis right behind. Such was MacNeil’s reduced pace, however, he condensed the GTD field so that when he did eventually stop, he emerged from the pits down in ninth.

Davis moved into the lead ahead of Snow at half-distance, but the most startling maneuver came on pitlane following the fifth yellow, as Bill Riley’s team turned around the #33 Viper Exchange Dodge Viper to spring it into the lead in class, having pitted from seventh!

With Jeroen Bleekemolen at the wheel, the Viper held on ahead of Alex Riberas now piloting the #23 Alex Job Porsche, which was in turn facing heavy pressure from Robin Liddell in the Audi R8, which ran ahead of Bryan Sellers in the PMR Lambo and Pumpelly in the Change Lambo.

Lally passed Pumpelly for fifth on lap 116, they then swapped again, and then again, 10 laps later.

At this stage, Bleekemolen’s pace at the front of the class was being artificially limited by 1) a damaged and flapping rear splitter, and 2) not quite being able to lap Tim Pappas’ Black Swan Racing Porsche 911, which had earlier been sideswiped off the track by a thuggish maneuver from Jens Klingmann’s BMW. The latter got a drive-through penalty, but would recover to finish sixth.

That slower pace gave a charging Lally his opportunity to pick off the cars ahead and take the GTD lead around the outside of the Viper. A clumsy and late passing attempt from Riberas to further demote Bleekemolen at the chicane moments later didn’t come off, and the subsequent damage sent the #23 Porsche to the pits. The nudge also slowed the Viper enough to allow Liddell’s Audi through into second.

And that’s how the order remained to the checkered flag, Lally finishing a second ahead of Liddell’s Audi, Bleekemolen third in the Viuper ahead of the Snow/Sellers PMR Lamborghini, and Lawson Aschenbach/Bell fifth in the second Stevenson Audi.