Second and third rows in class for Chevrolet Corvette C7.Rs

Corvette Racing will roll off the GT Le Mans grid from the second and third rows Saturday for the 62nd Mobil 1 Twelve Hours of Sebring Fueled by Fresh from Florida. Oliver Gavin qualified the No. 4 Chevrolet Corvette C7.R fourth in GTLM, and Antonio Garcia was fifth in his No. 3 Corvette. The new Corvette C7.R is racing at Sebring for the first time following its debut in January at the Rolex 24 At Daytona.

Gavin’s best lap was a 1:59.222 (112.932 mph) in the Corvette he shares with Tommy Milner – the duo won in class last year at Sebring – and Robin Liddell. Liddell already has one victory to his credit at Sebring this week with a win in Friday’s Continental Tire Sports Car Challenge driving a Camaro Z/28.R. 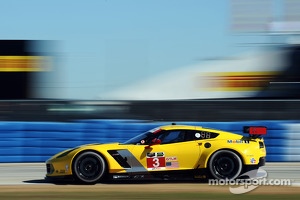 Garcia, driving with Jan Magnussen and Ryan Briscoe, set a best time of 1:59.224 (112.930 mph) – just 0.002 seconds off the pace of the sister car. Garcia and Magnussen won the 2013 American Le Mans Series championship despite scoring zero points at Sebring.

Corvette Racing tested the Corvette C7.R multiple times at Sebring during the offseason. The rough nature of the track was the ideal place to optimize the new car. The new aluminum frame is 40 percent stiffer than the Corvette C6.R from last season and helps keep the car stable over the considerable bumps and turns around Sebring’s 3.7-mile layout.

Antonio Garcia, NO. 3 Chevrolet Corvette C7.Rs (On different characteristics of track due to Friday’s Continental Tire race): "Yes, I think so, for sure. That is normal that it happens; especially after such a big difference in time from Practice Four to qualifying. It had been six or seven hours since we've been on track, and a lot of other cars had been out. So for sure, the car behaved differently because of the amount of rubber, or different cars that have been out. But the main characteristics of the car pretty much remained the same. It was just a factor of making the car work on every single point of the race track. So I didn't probably nail it the whole lap because I had to change my style from this morning. But we were probably in the same boat. I'm sure everybody felt the same, not just us at Corvette Racing. So it is part of the game. The good thing is that we are among six cars within three-tenths. That's pretty close, and exciting to see towards the race." (On consistency in stint): "That is something we will know 35-40 minutes into the race. We've been working really hard on that; just trying to make the car behave - not just for a single lap but to be able to go through the stint as consistent as possible."

Oliver Gavin, NO. 4 Chevrolet Corvette C7.Rs "It was a very close session. The Porsche obviously came out and put down a great lap. It was kind of a strange session because from the Conti (Continental Tire Sports Car Challenge) race before us, there was rubber or whatever that was still on the track. Our car was quite different to drive (than from practice sessions). It was unusual in the way the fronts (tires) came in before the rears (tires) did. We never really got that matched up, and I think that if we had managed to get that matched up, we would have had an even better shot at getting pole. But it was a clean run, no traffic or anything. I think the circuit is going to get very different before the race. You are constantly fighting with that here. The wind direction changes as well so now it is blowing us down the backstretch. Blowing you in to Turn One; blowing you out of (Turn) 17; all those things you have to take into account. We are reasonably happy with the car, and looking forward to the race tomorrow."

Doug Fehan, CORVETTE RACING PROGRAM MANAGER "Today's qualifying session clearly demonstrated how incredibly close the GT Le Mans class continues to be. The difference between pole position and P5 was a mere three-tenths of a second, which should make for a great race tomorrow. We have worked hard to ensure that our Corvette C7.Rs will be consistent over an entire stint, and we know from experience that handling is the ultimate key to success in the Sebring 12 Hours."