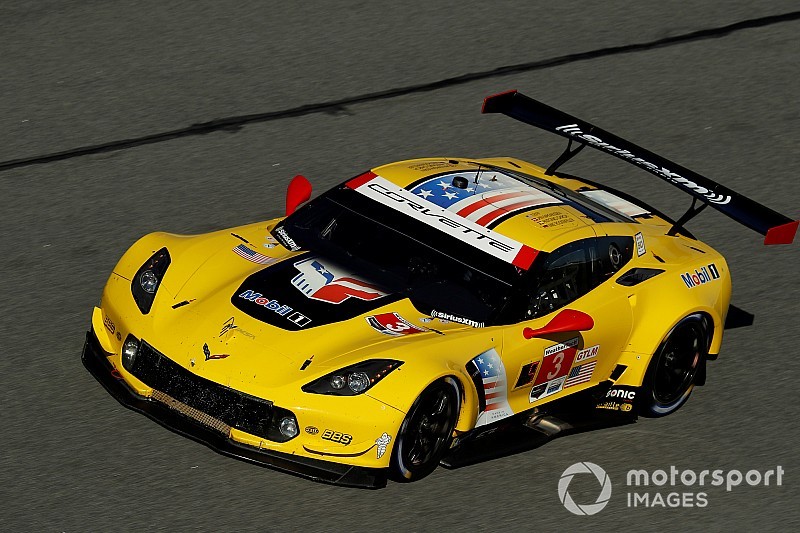 Reigning IMSA GT Le Mans champion Jan Magnussen has admitted that his fastest time in qualifying at Daytona on Sunday was “a little artificial” and that Corvette Racing needs to find more pace to contend for race victory in three weeks.

Magnussen and Antonio Garcia won last year’s GTLM championship without scoring a race win, and the the Corvette C7.R is now embarking on its sixth season of competition.

Although Magnussen set the fastest time in the session that sets the location of garage and pitboxes, he said that it was getting a tow from the sister car of Oliver Gavin/Tommy Milner/Marcel Fassler that enabled his #3 car to prevail.

“We did exactly the same as we did last year,” said Magnussen where we agreed who was going to tow who. It was me again like in race qualifying last year.

“That gave us a good top-speed advantage in that session. Olly [Gavin] did a fantastic job placing himself at the right distance out of Turn Six so I could take full advantage of the tow down to the Bus Stop [chicane] and then go by him at start/finish to get the fastest lap.

Magnussen’s lap time in the Corvette he will share with both Garcia and Mike Rockenfeller was 1min42.651sec and put him top of a nine-car GTLM field that was covered by just 0.64sec. However, he said that Gavin’s eighth-place time of 1:43.193 without the aid of a draft was a more realistic gauge of the C7.R’s performance relative to its competitors.

“[Our] time today was a little artificial because of the towing we did,” he said. “We had one car at the front and one at the back. The difference between our cars is the difference the tow makes.

“We have some work to do in order to be competitive over the full race. I’m confident the guys at Corvette Racing and Michelin will give us the best chance to win the race.

“We’ll do another session in the Chevrolet simulator, and I believe we’ll work through the program we ran here to make sure everything we do in the simulator is relevant. There’s a ton of data for the engineers to go through and fine-tune our setup.

“We’ll have a little bit of testing at the race [weekend] so we can try some different things. But we need to arrive back here with a car that’s ready for qualifying and for the race.”

Magnussen, who has won the Le Mans 24 Hours four times with Corvette but has just one victory at Daytona, appeared to suggest the C7.R was nearing the end of its development potential, when he commented that “we didn’t have a lot of new stuff to try out this year.” However, he believes that the legendary slickness and race smarts of the Doug Fehan-run team will enable Corvette Racing to again contend for IMSA’s GTLM honors at season’s end.

“All the drivers here are to make Corvette Racing win races. That means we do work together,” he said. “Very often the focus is put on one car. It’s not always the same car.

“If we work as a team like we did last year, then I’m sure we’ll have a great shot at getting another championship for Corvette Racing.”

Alonso confident in “strong team” for Rolex 24 at Daytona