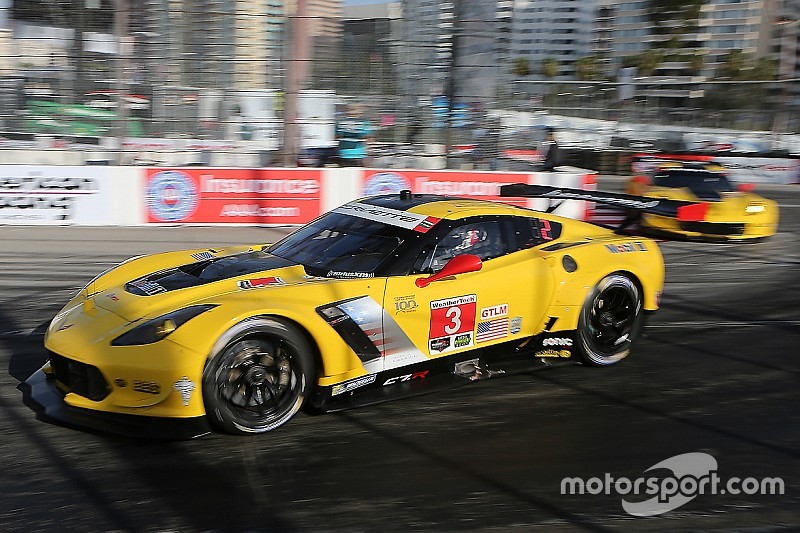 Corvette Racing’s Antonio Garcia admitted that losing victory on the final turn of the final lap at Long Beach due to a traffic jam caused by crashed GTD cars had left him “confused.”

On the final lap of the race, the Corvette Racing team appeared headed for a 1-2 finish, with Sebring winner Garcia heading teammate Tommy Milner ahead of the Ryan Briscoe/Richard Westbrook Ford GT, Kevin Estre/Laurens Vanthoor in a Porsche 911 RSR and the Bill Auberlen/Alexander Sims-driven BMW M6.

However, three crashed GT Daytona cars and a stalled Prototype, the PR1/Mathiasen Ligier, blocked the track at the hairpin, causing the GTLM cars to grind to a halt. When the Prototype got going again, Garcia, who had taken an outside line to the turn, was still boxed in by shunted GTD cars, but his four nearest pursuers now had the inside lane open and demoted the #3 Corvette to fifth at the checkered flag.

“I’ve never been part of a finish like that,” said a disconsolate Garcia. “I’m very confused with how the officials judged both incidents in the last corner.

“Our No. 3 Corvette team did everything we needed to do in order to have the best chance at another victory. I don’t understand the ending and unfortunately for us the results are what they are.”

Co-driver Jan Magnussen, who’d been caught up in a first-lap incident when Toni Vilander’s Ferrari made contact with the ESM Nissan of Ed Brown, added: “The start was unfortunate. I didn’t get a good getaway. I kind of got swamped going into Turn 1. Then I was just in the wrong place going in to Turn Five when the Ferrari got it wrong with one of the prototypes.

“I got caught in all of that and it put us back. We were on a different strategy from there. Our team did a fantastic job. It just an unsatisfying result.”

Teammates Oliver Gavin and Tommy Milner, who benefited from the mess to score the victory, described the ending as unfortunate.

Said Milner: ““It was a weird race today for sure. I’ve never seen things work out that way for me or anyone else for that matter. You feel bad for the No. 3 guys, for Antonio and Jan. They had a great race and did everything right.

“It was just unlucky to lose it that way in a big pack. You need luck in racing sometimes, and today we had that on our side.”

Added Gavin: “This was a very bizarre day and finish. We will take this victory, and we’re glad that Corvette Racing and Chevrolet have won again at Long Beach. It was just a very unfortunate way that it worked out for Antonio and Jan. It’s definitely not the way Tommy and I would have liked to have won.”