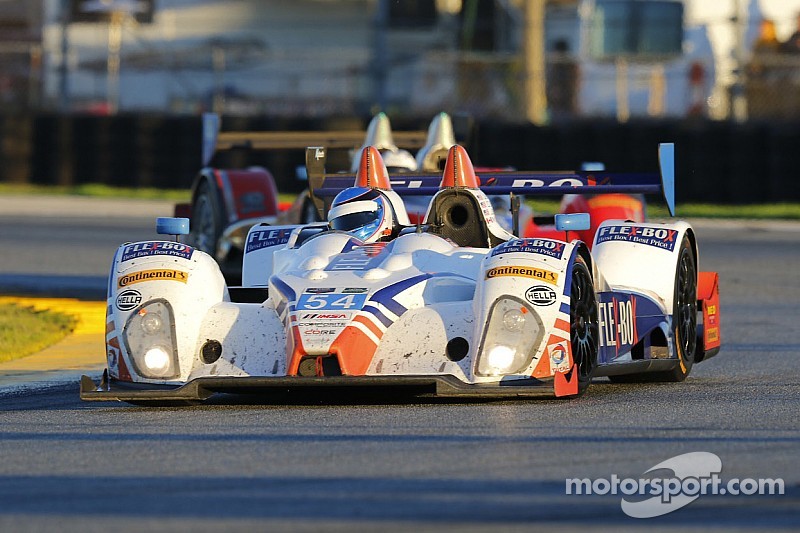 DAYTONA BEACH, Fla. – CORE autosport appeared to be en route to its second-consecutive Rolex 24 at Daytona win, but after leading 80 percent of the 24-hour TUDOR United SportsCar race, contact sent the No. 54 Composite Resources/Flex Box ORECA FLM09 into the wall with only 20 minutes remaining. Luckily, the team still managed to salvage a podium finish and a Tequila Patrón North American Endurance Cup win.

Starting second on the Prototype Challenge grid, Colin Braun took over the class lead after only four laps. He held the lead until the team cycled through pit stops and driver changes for Jon Bennett and James Gué. Just as the sun was setting on Daytona International Speedway, Gué reclaimed the PC lead. The No. 54 held onto the class lead into the evening with Mark Wilkins behind the wheel.

We were in a position to win the race and had that guy used better judgment, I think we would’ve won the race.

A flat tire near the eight-hour mark dropped CORE to third, but only an hour later, Braun had the car back at the front of the PC field and proceeded to build a lead of three laps. The No. 54 continued to lead through the overnight hours and into sunrise on Sunday as the team cycled through the driver rotation.

During the morning hours, CORE held a steady one-lap lead over the second place No. 52 PR1/Mathiasen Motorsports car, but with one hour to go, driver Tom Kimber-Smith began to reel in Braun.

The gap was down to 47-seconds when Braun attempted a pass on a slower Daytona Prototype. The car made an erratic move, knocking the No. 54 into the grass. Braun was able to gather himself up and resume, unaware that the incident had damaged the rear suspension. As he entered the braking zone for the Bus Stop, the back of the car snapped sideways and sent Braun hard into the wall. In the process a suspension piece punctured the oil tank, which resulted in a fire. Braun was able to exit the car safely, but CORE’s race ended 20 minutes before the checkered flag.

Thankfully, the lead PC cars’ ability to gap the field and the rate of attrition enabled the No. 54 to officially finish third despite not seeing the checkered flag. Additionally, for leading at the six-, 12- and 18-hour marks, CORE autosport and its drivers won the first round of the Tequila Patrón North American Endurance Cup, a title which they won in 2014.

Next up on the TUDOR United SportsCar Championship schedule is the Mobil 1 Twelve Hours of Sebring in Sebring, Florida. CORE autosport is the defending PC winner at Sebring.

“With the events of today, it’s easy to focus on the last 20 minutes of the race. But quite honestly, the first 23 hours and 40 minutes were pretty amazing. After a great performance last year, we led this race essentially from the drop of the green flag right until the very end. Unfortunately, stuff like this happens when you’re in the business of risk management. We take chances once or twice a lap, sometimes it works out and sometimes it doesn’t. It’s just a fact of racing.

“I’m proud of the team effort from all the drivers – James, Mark, Colin and myself – and the team. We had an incredibly well built and bulletproof car. We led at the six-hour mark, 12-hour mark, 18-hour mark and we would’ve led at the 24-hour mark as well. But it just wasn’t meant to be. The most important thing is Colin is fine, the car will heal itself and we’ll be back at Sebring.

“Everybody did a really great job. We were struggling with the straight-line speed of the car, but we were still managing the gap. With 20 minutes to go or so, I made a pretty routine pass around the outside of a really slow DP car in Turn 5. I think he just missed his brake marker and ran into the right rear of me pretty hard. It was hard enough to spin me out and subsequently, I think, break the right rear suspension, unbeknownst to me. Finally, I got it back going on track and I thought it was going to be ok. I went through the bus stop and I think the suspension just folded up. I ended up hitting the wall pretty hard, bringing our day to an abrupt end.

“There were lots of cars going by pretty fast, so I certainly didn’t want to risk getting out and being hit by one of them. I didn’t know if I had spilt oil behind me or if I had a bunch of parts behind me, so I certainly wasn’t going to get out of the car until the last minute. I hit the fire bottle and just waited for the safety cars to get there so I knew I’d be ok and not get hit.

“I’m gutted for everybody. We were in a position to win the race and had that guy used better judgment, I think we would’ve won the race. It’s one thing when you make a bold move and get on the bad side of it, but it’s another thing when I make a routine move that I’ve made a hundred times in a race and that happens.”

“I can’t say enough about the CORE autosport team. I think they are the best in the business. They gave us a great racecar. The setup was spot-on. We pushed hard all race, but we were smart and stayed out of trouble. It’s a tough one. There’s a reason why it feels so good to win one of these; it’s because they are really hard to win. All in all, the team performed excellent. Everyone did a great job in and out of the car. For that, it was awesome to be a part of the team for this event.”

Corvette Racing wins 53rd Rolex 24 by less than one second

The MSR Ligier JS P2, the quickest car in the Rolex 24 at Daytona!