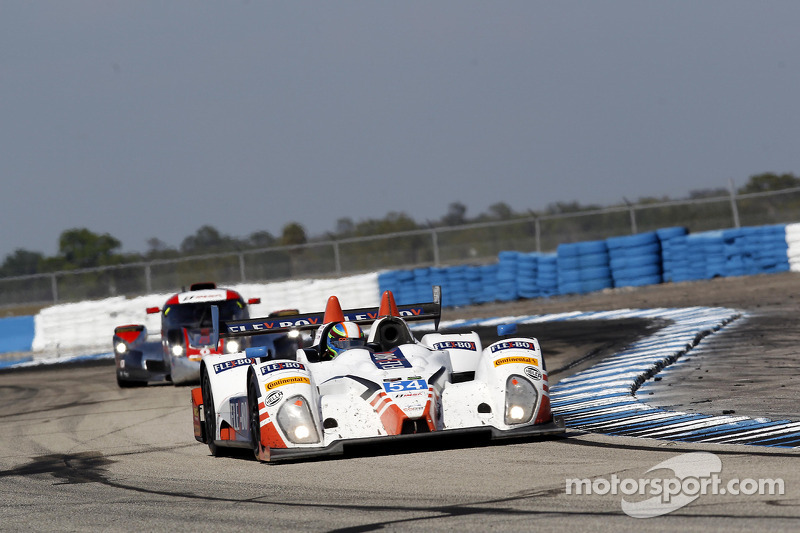 After a six week hiatus for the Prototype Challenge category, Jon Bennett and Colin Braun are eager to get back behind the wheel of the No. 54 ORECA FLM09 for their shot at a third-straight TUDOR United SportsCar Championship win as the series heads to Mazda Raceway Laguna Seca.

CORE autosport has a record of strong finishes at Laguna Seca. Since the team's debut in 2011 a CORE car has been on every PC podium at the Monterey, California circuit. This includes Bennett and Braun's first ever American Le Mans Series win in 2012.

The new TUDOR series (a merger between GRAND-AM and ALMS) will debut a new format at Laguna Seca. Previously at Daytona and Sebring, all four categories of cars raced together. This weekend the four classes will be seperated into two races; the PC and GTD cars will race together in the morning and the P and GTLM cars will race together in the afternoon. This gives CORE autosport the unique opportunity to take its first overall race victory.

Jon Bennett
Driver: No. 54 ORECA FLM09
“I love Laguna Seca, but to be honest, every track is special to me in some way. As I arrive, each race track brings back good memories with the first drive through the gate. When I arrive at Laguna Seca, I remember 2012 when I told Colin Braun at dinner Friday night, ‘Tomorrow is the day. Tomorrow is the day we will share our first victory together and I will win my first profession race. I can just feel it.’ The next day Colin and I stood on the top step of Laguna Seca’s podium. And . . . I have a good feeling about 2014.

“Personally, I rank Laguna Seca among the top tracks that the TUDOR series will visit this year. This place is FAST. With our prototype generating downforce, this circuit drives like a do-it-yourself roller coaster. The turns are flowing and most of them have a bit of camber that helps the race car rocket from corner to corner. And, of course, there is the ‘corkscrew,’ internationally known to be as spectacular for both spectators and drivers. As a driver, I know to arrive in my best physical shape because the high speeds and quick corners can leave you breathless and a bit sore.

“I am looking forward to the new format for this event. It will be a unique opportunity for Colin and I to have an honest opportunity to compete for the overall win. I truly enjoy ‘working the traffic’ during our races so I will miss the other Prototypes and the GTLM cars. The split Format will give me some quality time to enjoy our Porsche 911 RSR teammates doing battle in their GTLM race though.”

Colin Braun
Driver: No. 54 ORECA FLM09
“I’m looking forward to Monterey. It’s certainly a track that we’ve done well at in the past and it’s a place that Jon [Bennett] is quick at. Last year we were really fast; qualified on pole, lead for most of the race, but had a hiccup at the end. We’ve proved we’re quick there and I think we’ll have a good starting setup and place to work from. I think any teams that have a good notebook from previous years’ experience are the teams that could do better than others, just because there is so little track time.

“For me the biggest challenge at Laguna is the sand—it always seems to be an unknown. I think this year is going to be quite a bit different for the PC cars, because as we learned at Sebring and Daytona, we have Continental Challenge cars on track before us and I think the way that their rubber works with our tires is something everyone is still trying to figure out. I think that’s when having a lot of experience to fall back on is going to be crucial.

“I’m not quite sure how the split format is going to work out. We practice together and we race separately, so the first time you’ll get a feel for traffic is going to be during the race. There will be a lot to learn during the first part of the race, figuring out how the traffic changes. I’d say the PC class is more affected by it, because we usually have a mix of passing GTD and GTLM cars, but getting passed by Prototypes. It will be interesting to not have to worry about being passed and just focused on getting through forward traffic.”