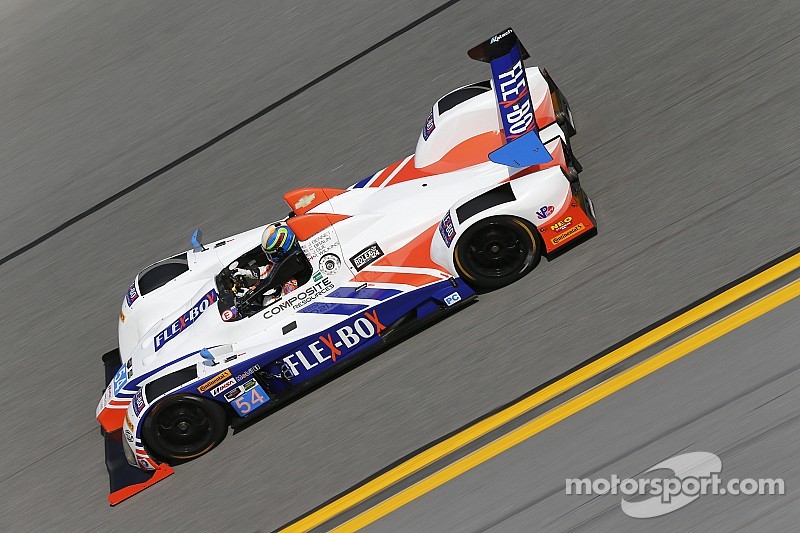 Jon Bennett started the No. 54 Composite Resources/ Flex Box ORECA FLM09 from fourth and maintained the position throughout the opening laps of the race. Bennett had slipped to fifth by the time the first full-course caution of the race was issued, but a pass-around procedure under yellow caught him back up with the class. While the majority of the PC teams pitted under yellow, Bennett and the No. 38 Performance Tech car did not. This moved Bennett to second.

Bennett maintained second place on the restart, but another full-course caution was issued shortly thereafter for a GTD car stuck in a gravel trap. Bennett once again defended his position on the second restart, but was later bumped to third by the No. 11 RSR car. Bennett regained second when the PC leader, No. 38, pitted.

It seems like every race, the pace between our cars and the GT Le Mans cars gets closer and closer.

Bennett closed out his opening stint in second and handed the car to co-driver Colin Braun with just over an hour and a half to go.

Braun returned to track in fifth, but quickly had the car up to second just 17 laps later. Braun moved into the lead when then leader No. 11 pitted and was able to widen his lead when the No. 11 team served a drive-through penalty.

The lead changed one more time when Braun made his final pit stop of the race for tires and fuel, handing the lead back to the No. 11. Braun returned to track in second, but despite his quick pace, was not able to regain the lead.

CORE’s solid second-place finish moves it into the lead of both the driver and team PC championships.

The team continues its hunt for its fifth-straight PC championship in Detroit, May 29 - 30, at the Chevrolet Sports Car Classic presented by the Metro Detroit Chevy Dealers.

"We had a pretty good race all in all. I enjoyed starting the car and had good pace during the beginning part of the race. I was trying to do a good job keeping the car straight and clean to hand it over to Colin. I survived a couple yellow flags. I thought we were in pretty good shape when I handed the car over to Colin.

"At some point we got out of phase with our pit stops and ultimately, when all the pit stops cycled through, we ended up being a little shy of our goal when it came to the gap to first place. In the end, we’ve had three races and three second-place finishes. It’s an awesome start to the season in terms of points. We can’t really complain about that. I think we’ll be really strong at our next race in Detroit.

"I think there was a lot of traffic. It seems like every race, the pace between our cars and the GT Le Mans cars gets closer and closer. It makes it quite busy on track. We were respectful to other cars, but came up a little bit short today."

"Jon’s done a great job this whole weekend. He qualified only six-tenths off the pole, which is awesome, and he did a great job in his opening stint.

"I don’t exactly know how it all unfolded after I got in the car. I had my head down and was going quick. I was surprised at the pace of the DP cars when they came by. They had to work pretty hard to pass us, so it was fun quasi-racing with those guys.

"I put some good laps in and moved up to second and ended up finishing second. Obviously, we would have loved to have a shot at the win, but it was a really good day for points, for us.

"All in all it was a strong effort. I’m really proud of the guys for doing a great job on pit lane. We’ll take a look at it and figure out why we came up a little bit short at the end. It was a solid championship performance for sure."

Ferraris put solid points in the bank at Laguna Seca