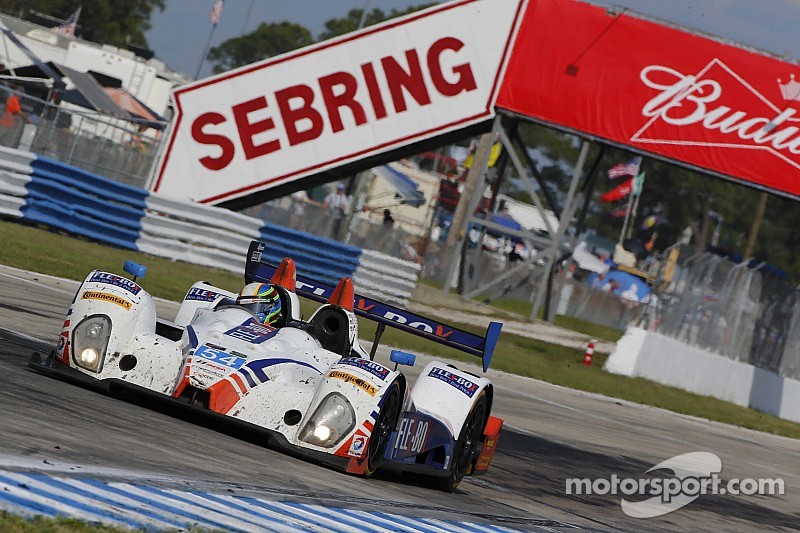 Sebring, Fla. – After some early set backs put the No. 54 Composite Resources/ Flex Box ORECA FLM09 a lap down, CORE autosport battled back with a vengeance to earn a runner-up finish at the Mobil 1 Twelve Hours of Sebring Fueled by Fresh From Florida.

After qualifying the car P2 on the Prototype Challenge grid, Colin Braun started the car for the legendary 12-hour enduro at Sebring International Raceway in central Florida. He immediately moved into the top spot on the opening lap and stayed there through the length of his stint.

Braun handed the car off to Jon Bennett, who had a brief off on cold tires to kick off the stint. Later, contact with a GTLM car further delayed the No. 54. Although there was no significant damage to the car and Bennett brought it home in fourth place, when James Gué jumped behind the wheel the team was a lap down.

Battle with the No. 38 of Conor Daly

Gué kept his nose clean and quick work by the CORE crew in the pits enabled the No. 54 to move up a spot to third. After a breathtaking battle with the No. 38 of Conor Daly, Gué was forced to relinquish third place, but got the final podium spot back when another PC car dropped out with problems.

Gué handed the car off to Braun who went on a tear, putting the No. 54 back on the lead lap, into second place and closing the gap to the leader before handing the car back to Gué. In his triple stint, Gué continued to make up ground on the leaders.

With two hours remaining in the race, it was Braun’s turn to hop back in the car and take it to the finish. Thanks to a well timed yellow flag and pass around, the No. 54 was within striking distance several times during Braun’s final turn in the car, but the leader—No. 52 PR1/Mathiassen car—managed to pull away in the nick of time. On the final round of pit stops, the No. 52 took fuel only, the No. 54 fuel and tires.

When the checkered flag flew, Braun crossed the line 11.614 seconds behind the No. 52. It was the second consecutive runner-up finish in this year’s TUDOR United SportsCar Championship for CORE.

It will be more than a month until the No. 54 sees track action again. Round Three of the PC season takes place at Mazda Raceway Laguna Seca, April 30 – May 3.

Jon Bennett - Driver: No. 54 ORECA FLM09: “Our strategy was to triple stint me early in the race and then build the strategy from where we were at that point. It was a pretty good run double stinting the tires, and then on the third stint, I got a fresh set. There was some drama. I got collected by a Corvette in the middle of my second stint. But at the end of the day, we were very lucky there was no damage, and I was able to hand the car over to James in good condition. We were basically on track to have a good result. But at the end of the day, we were just a little shy in overall performance. I’m very happy for a somewhat uneventful 12-hour race. It’s nice to have back-to-back second-place finishes with Daytona. Looking at the bigger picture and the championship, it’s a great result for the season."

Colin Braun - Driver: No. 54 ORECA FLM09: “I’m really proud of the effort these guys put in. It was a lot of work to get the car rebuilt and ready to come here. To finish up qualifying second and finish the race second is a championship effort. We had a really good car on the front side of a tire run. We were really similar to the 52 car in the middle of the run, but they had a better car at the end of a run. It was one of those races where we were in it and contending the whole time. It just didn’t fall our way quite like we wanted it to there at the end. We just got a little bit behind in the last 30 minutes or so and that was the race.”

Jame Gué - Driver: No. 54 ORECA FLM09: “I had a pretty challenging stint. I don’t know if it was the time of day or an issue with the tires that we got, but right from the get-go, they just didn’t come up to temperature like they normally do. I struggled terribly with the balance of the car. Unfortunately, that was the set I had to double stint, so I was stuck with them for two stints. When I got back in the second time, the second set of tires was a totally different car. I did my best to keep us in sight of the leaders and on the lead lap, looking for the yellow. Fortunately, when Colin got back in, we got our yellow and right back up on the leaders. I’m extremely pleased to be on the podium again. The CORE autosport guys did a great job, and it was a great day.”