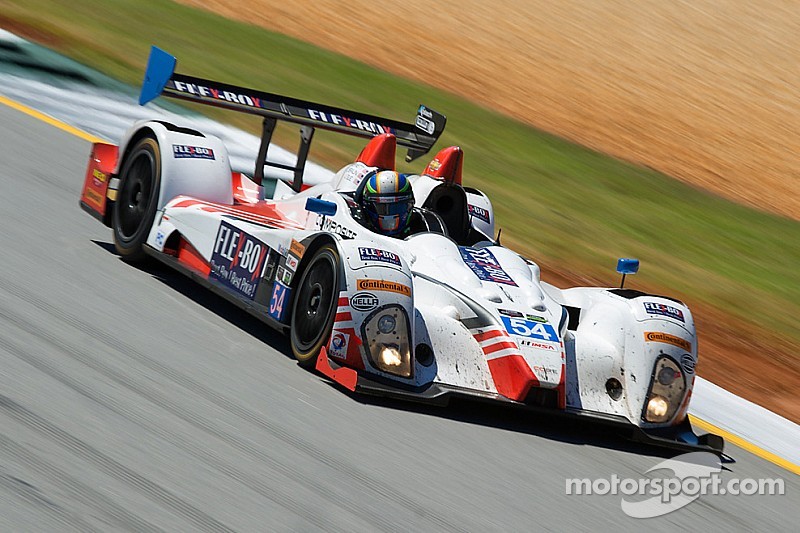 After three days of testing, CORE’s No. 54 ORECA FLM09 came out on top of the Prototype Challenge times.

Daytona Beach, Fla. – CORE autosport kicked off its 2015 season at the Roar Before the 24, the TUDOR United SportsCar Championship’s official test session for the Rolex 24 at Daytona. After three days of testing, CORE’s No. 54 Composite Resources/Flex-Box ORECA FLM09 came out on top of the Prototype Challenge times.

With eight total sessions spread from Friday through Sunday, drivers Jon Bennett, Colin Braun, James Gue and Mark Wilkins had plenty of time to put the No. 54 through its paces, feel out different track conditions and practice pit stop procedures.

I think we definitely had less cars on the entry list and that made it a bit easier to get clear laps than in years past.

This included a night session on Saturday and a wet session on Sunday morning. Having checked off all it’s test items, the team opted to skip Sunday’s final session to get a head start on its trip back to Rock Hill, S.C.

CORE’s roster of drivers and crew remains largely unchanged and it is with this group that it won the 2014 Rolex 24 race. The time to defend that victory is now less than two weeks away. The Rolex 24 at Daytona goes green, Saturday, Jan. 24 at 2:10pm ET and will be broadcast live on FOX until 4pm, when coverage will switch to FOX Sports 2.

“Yeah, I think everything was good to go off the truck. We had a list of things we wanted to work through and try and continue to build on from last year. We were just checking things off the list. It’s nice when you show up at a test and it’s the same group of personnel. I think that’s a real big help for us. Nobody had to get used to anything, they just got right to work.

“I think we had enough clear track time that we were able to accomplish what we wanted, but also get a taste of what it’s like in traffic. I think we definitely had less cars on the entry list and that made it a bit easier to get clear laps than in years past.

“We have a reasonable grip on the new rules now. We had a mid-day rule change on the first day of testing. That keeps you on your toes, but we’re adaptable and ready to figure it out and that’s what makes us a strong group.

“We feel really prepared and ready to go. Obviously there’s not a whole lot of time between now and the 24-hour race like there has been in year’s past, so the boys have a lot of work to do to get the car ready to go, but we’ve got good people in place and they know what to do. There’s not enough time to work on a whole lot, so I’m really glad we put in a lot of time preparing over the off season. We knew the short break was coming and we’re ready to go!”

Flying Lizard completes successful test at the Roar before 24