The Mobil 1 12 Hours of Sebring is the next race for the TUDOR United SportsCar Championship and will take place March 15 at Sebring International Raceway. 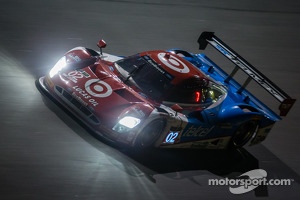 The No. 02 showed strength early, gaining four spots and taking the lead in the second hour before the field was stopped for a 56-minute red flag. Leading at the halfway point, Dixon gave way to teammate Kanaan who continued to lead into hour 14 of the Rolex 24. While running second in the 18 th hour, the No. 02 team cut a right-rear tire in the infield, resulting in a timely two-mile trip back to the pits which subsequently dropped the car to fifth (one lap down).

After gaining one position within the final four hours, the team attempted to get back on the lead lap. With less than an hour remaining in the race, the team could not continue due to the floor of the car separating from the chassis, ending the No. 02 team’s day in eighth position (28 laps down).

After overcoming an early pit stop issue, the No. 01 car contended in the top-five overall for the first half of the 24-hour race. Five-time and defending Rolex 24 At Daytona Winner Scott Pruett and co-drivers Memo Rojas (2008, 2011, 2013 Winner), NASCAR star Jamie McMurray and 2013 Indy Lights Champion Sage Karam had trouble in the overnight portion of the race when Pruett experienced handling issues and made contact with the outside wall exiting the backstretch chicane.

The No. 01 then headed to the garage area at 12:29 a.m., and after a 55-minute repair returned to the track in ninth position, 32 laps down to the leader. During the final two hours of the race, Pruett drove the car back to the garage for mechanical issues, subsequently ending the day for the No. 01 team, who finished in 11 th position (85 laps down).

Tony Kanaan, No. 02 Target/Telcel Ford EcoBoost Riley: “If you look at this race or the Indy 500, everybody is going to have some ‘what ifs’. But yes, that's a shame what happened to the 02. Dixon cut a tire but that's not something mechanical, he didn't hit anything. It's like a NASCAR race. People blow tires, and yes we were fourth when we went out, but I think realistically we could have been be topthree easy. We were in the fight all day. Things could have happened to the leaders as well and didn't, and that's how you win races. I'm pleased. I had a lot of fun. Once you've done this race with an organization like this, it's going to be hard to come back and do it with anybody else because for me at this point in my career, it's very overwhelming and I'm just overwhelmed with how everything works.”

Sage Karam, No. 01 Telcel/Target Ford EcoBoost Riley: “This was my first Rolex 24, and to do it with a team like Chip Ganassi Racing with Felix Sabates was an honor. I had a lot of fun, and I drove from two to four this morning. I got out of the car from about eight to 10, so I did a lot of driving, but I was really tired afterwards actually. Those are some graveyard shifts right there. We had some misfortune in the beginning, but the team is such a cool unit to work with. They’re so together, and they really worked well to put the car back together just to get some laps. Even though we went really far behind, everyone still pushed like we were in the lead. That’s just the magnitude of this team, and that’s why I really love working with these guys – they never give up and they always want to win.”

Scott Dixon, No. 02 Target/Telcel Ford EcoBoost Riley: “I started hearing some things under the floor near the end of the race, and then in that last stint it got real bad. Something started to peel back, and then the front end started to get really light, so we brought it in. It was really fun. Traffic was kind of crazy. Unfortunately for us, even at speed we didn’t have what the Corvettes had. We were doing the best that we could and Ford has done a hell of a job bringing this new engine to the 24 hours.”

Scott Pruett, No. 01 Telcel/Target Ford EcoBoost Riley: “I can’t say enough about the Ford guys and how far we have come from the Roar. It seemed like from the start the 01 car was just plagued with problems. The pit stop, then me hitting the fence. It breaks my heart that I hit the fence and then this. But to see where we were, and where we are now, this is a great step moving forward with this program. This is huge. Going into this race, everyone knew there was a 4-5 mile per hour differential (to the Corvette). IMSA knew. They recognized it. They didn’t want to change it. We knew the differential from the start. At the end of the day, it’s Daytona. I’ve been here when they have started more cars. That’s just what it is here. You can complain about traffic all you want, but it’s great to be here, and it’s great to have this many cars, and it’s great to have this many fans following.”

Marino Franchitti", No. 01 Telcel/Target Ford EcoBoost Riley: It wasn't the result we were hoping for in the end... But it was a flawless performance by the whole Chip Ganassi racing team as well as by my team mates Scott, Tony and Kyle; it was just a pleasure to be a part of the whole programme. I want to say a big thank you to everyone involved in getting the car ready for the Rolex 24 hour and to all our partners, especially Big Machine label group; it was a great debut for the Ford Ecoboost motor. I'm hoping we can do more together in the future and we're working hard on making that happen."

The Mobil 1 12 Hours of Sebring is the next race for the TUDOR United SportsCar Championship and will take place March 15 at Sebring International Raceway.

Scuderia Corsa bring all three entries to finish at Daytona