Long-time partners Telcel and TELMEX return as the primary sponsors of the No. 01 Ford EcoBoost Riley in the Prototype category for the USCC season-long effort piloted by Scott Pruett and Memo Rojas in their eighth year together, after finishing the GRAND-AM era as most-successful driving duo in Rolex Sports Car Series history.

In addition, CGRFS will again field two Prototypes for the Rolex 24 At Daytona, featuring eight drivers that represent some of the best talent the motor racing world has to offer. Pruett and Rojas will unite with CGRFS NASCAR Sprint Cup Series (NSCS) teammate Jamie McMurray and reigning Indy Lights Champion Sage Karam to form the lineup in the No. 01 Telcel/Target/Comfort Revolution Ford EcoBoost Riley, while the Team Target trio of drivers Scott Dixon, Tony Kanaan and Kyle Larson join sports car star Marino Franchitti in the No. 02 Target/Telcel/Big Machine Records Ford EcoBoost Riley. 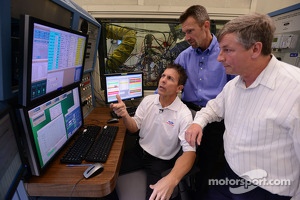 The CGRFS Rolex 24 At Daytona lineup has new faces including the 2013 NNS Rookie of the Year and 2014 driver of the No. 42 Target Chevrolet in the NSCS, Kyle Larson.

It will also include the 2013 Indy Lights Champion Sage Karam and sports car veteran and 2013 LMP2 ALMS champion, Marino Franchitti. In addition, the team has added Big Machine Records and Comfort Revolution as two new partners to its longtime partnerships with Telcel and Target.

Pruett is the first American to score 12 major sports car championships - his closest competitor is the late Peter Gregg who has seven to his credit. Pruett’s previous titles include two IMSA GTO Titles (1986, 1988), one IMSA GT Endurance (1986) and three Trans-Am Championships (1987, 1994, 2003).

Chip Ganassi, Team Owner: “This race is always exciting for me. Because it is a 24-hour race, there are so many factors that go into having success. You need the drivers, the people, the equipment and the partners - but most importantly they all have to act as one team and that is where I think our strength lies. And having a little bit of luck on your side never hurts. When you make it to victory lane in this race, you know that you have accomplished something really special. In addition, it is not often when we can bring such a diverse group of drivers from NASCAR, INDYCAR and IMSA together to compete in one race. It is a great kick off to our racing season.”

Jamie Allison, Director, Ford Racing: “Chip Ganassi Racing is a world-class team with some of the best road racers in the world. The caliber of drivers including Scott Pruett, who started his racing career with Ford and is now the winningest driver in Rolex 24 history really raises the bar. We're happy to have that level of talent to showcase what Ford's EcoBoost technology can do on the race track.”