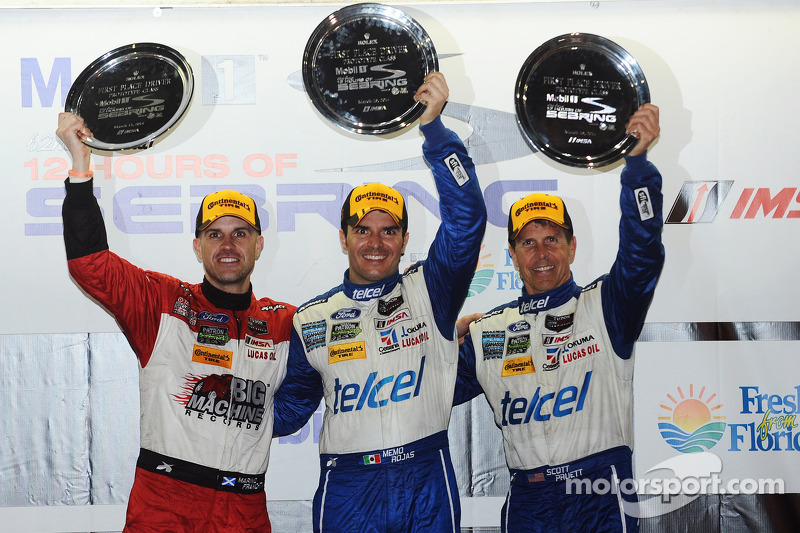 The 62nd Mobil 1 Twelve Hours of Sebring Fueled by Fresh From Florida marked the first victory for the brand-new Ford EcoBoost turbocharged engine. It was the first overall Sebring victory and the record 57th in North American endurance sports car competition for Scott Pruett, coming 28 years after a GTO class victory in the 1986 Twelve Hours. 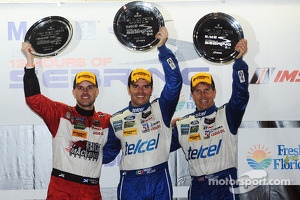 Co-drivers Pruett, Memo Rojas and Marino Franchitti also made Chip Ganassi Racing – in its first Twelve Hours of Sebring appearance – the first team to win Sebring, the Rolex 24 At Daytona, the Indianapolis 500 and the Daytona 500.

“It’s incredible,” Pruett said. “After all those victories you hope to get, this was still one on my bucket list. I’ve won here in class but never won overall. It’s even more exciting to win it overall, and to win it for Ford both times. I can’t say enough about the Ganassi group. We all worked together as a team and kept digging.” A race that featured 30 lead changes –one shy of the event record – among 11 different cars came down to the final pit-stop sequence in the final hour. When Ryan Dalziel brought the No. 1 Tequila Patrón HPD ARX-03b/Honda onto pit road for its final service with just less than 40 minutes remaining, Marino Franchitti steered the No. 01 Telcel Ford EcoBoost/Riley DP to the front of the field, having completed its final service with just more than 50 minutes to go.

The race’s 11th and final full-course caution set up a final, 20-minute shootout between Franchitti and Dalziel. Franchitti managed to hold off his hard-charging fellow Scotsman to secure the victory by 4.682 seconds in the closest “contested” finish in race history, topping the 2005 event. (An “orchestrated” team finish had a 0.482-second margin of victory in 2001.)

“It wasn’t too bad on the final restart,” Franchitti said. “I had a break with a couple of GT cars that helped me get a break on the first lap. To rebound from Daytona like this, and to bring Chip the victory in his first Sebring Twelve Hours, and to follow cars like the GT40 for Ford, is an … exciting day.”

The Rolex 24 At Daytona-winning trio of Joao Barbosa, Christian Fittipaldi and Sebastien Bourdais completed the podium with a third-place run in the No. 5 Action Express Racing Corvette DP.

Chip Ganassi Racing also celebrated a victory in the second round of the four-race Tequila Patrón North American Endurance Cup. No. 02 Ford EcoBoost/Riley DP teammates Tony Kanaan, Scott Dixon and Sage Karam earned the most points from Sebring’s three segments toward the $100,000 prize for the top-performing team in endurance races at Daytona, Sebring, Watkins Glen International on June 29 and the Road Atlanta season finale on Oct. 4.

After taking the maiden PC class Rolex 24 At Daytona victory in January by more than a lap, the No. 54 teammates had a much tougher time at Sebring in what became a battle between them and the No. 09 RSR Racing ORECA FLM09 shared by Bruno Junqueira, Jon Bennett and David Heinemeier Hansson.

The two cars traded the lead throughout the second half of the race before Braun took the lead for good with just under 40 minutes remaining. Braun beat Junqueira to the stripe by 2.428 seconds to secure the race victory and the team’s second-straight round win in the Patrón Endurance Cup, worth $50,000 to the winner at season’s end.

“The CORE autosport guys did a heck of a job,” Braun said. “We had good pits, had a good car and we were able to stay the course with our plan. We were able to win in both of these classes again. We had no glitches. It was great top to bottom.”