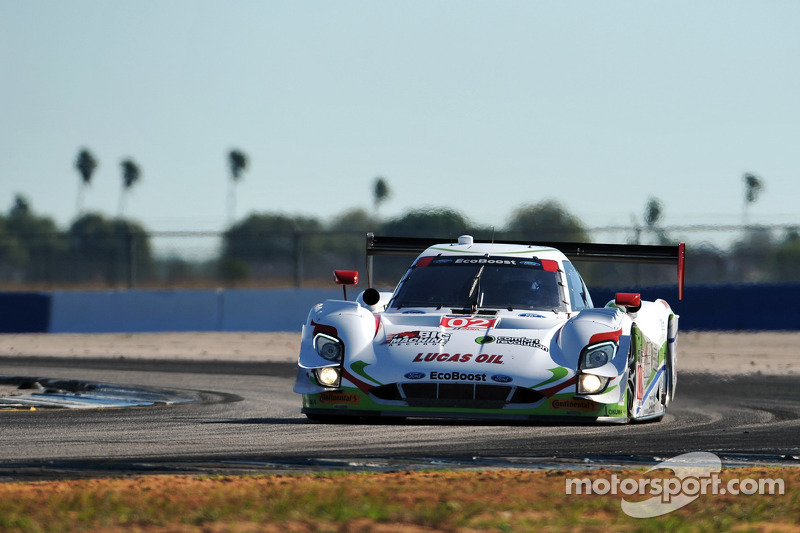 The No. 02 Ford EcoBoost/Riley of Chip Ganassi Racing with Felix Sabates came out of the blocks strong in Thursday’s practice sessions, leading TUDOR United SportsCar Championship preparation for Saturday’s Mobil 1 Twelve Hours of Sebring Fueled by Fresh From Florida.

Saturday’s race serves as both the second round of the TUDOR Championship and the Tequila Patrón North American Endurance Cup. The event begins at 10:15 a.m. ET with live FOX Sports 1 coverage from 10 a.m.-1 p.m. ET and the remainder of the event streamed on IMSA.com. FOX Sports 1 also will air a three-hour highlight telecast on Sunday at 8:30 a.m. ET.

Three-time and defending IndyCar Series champion Scott Dixon had the fastest lap of the day on Thursday, at 1 minute, 52.357 seconds (119.832 mph) in the Ford he co-drives with fellow open-wheel drivers Tony Kanaan and Sage Karam to lead the Prototype (P) class. After running his best lap in the first of three sessions, Dixon also was fastest in night practice with a lap of 1:53.090 (119.056 mph).

“Obviously, it’s never a bad thing unloading fast off the truck and we were pleased pacing the opening session,” Dixon said. “The Ganassi team has done a great job, both in testing and getting the Prototype where it needed to be since the Rolex 24 At Daytona.”

The team to beat entering the race is the No. 5 Corvette DP, with Action Express Racing bringing back the same lineup of Joao Barbosa, Christian Fittipaldi and Sebastien Bourdais that won the season-opening Rolex 24 At Daytona in January. Barbosa posted the third-fastest lap in the first practice, running 1:53.404 (118.726 mph), and was second-fastest in night practice with a lap of 1:53.654 (118.465 mph).

“We did a lot of homework over the winter, and in my opinion, it’s paying off,” Fittipaldi said. “We’re really comfortable again [like the team was at Daytona]. We know the competition is tough – by no means are we underestimating the competition. I think we had a small advantage at Daytona. I think they closed up the gap a little bit here, so we need to continue reinventing things on the car to make us go quicker. We have the same mindset as Daytona. Everything’s under control. We’re ready to race.” 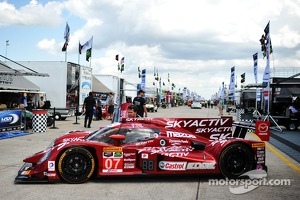 Looking to follow up CORE autosport’s victorious start to the season at Daytona in Prototype Challenge (PC), Colin Braun was fastest in Thursday practice driving the No. 54 ORECA FLM09. Braun ran a lap of 1:55.382 seconds (116.691 mph) in the car he co-drives with Jon Bennett and James Gue.

“Obviously, we’ve been working hard since Daytona, trying to improve our car,” Braun said. “Coming here, we had a good plan laid out since we were not able to test here and this is our first time at Sebring since last year’s race. We have a lot of things to work through, but Jon (Bennett) and James (Gue) are doing a good job. We’re just trying to execute our plan.”

Qualifying begins at 4:10 p.m. ET Friday, with 15-minute sessions for each of the four classes. There will also be a one-hour final practice session beginning at 9:55 a.m.

Dempsey Racing gets a feel for Sebring with solid Thursday practice