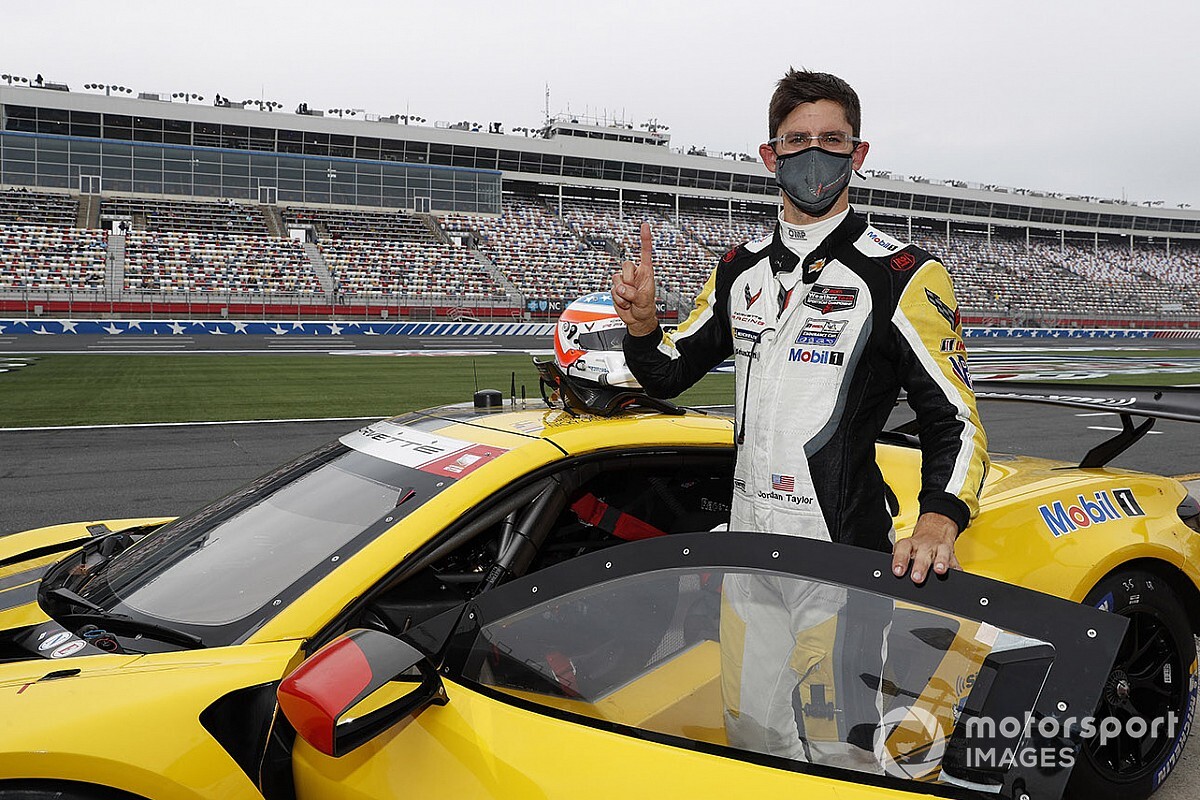 Laurens Vanthoor brought out the red flag in GT Le Mans qualifying when he struck the wall in his #912 Porsche 911 RSR as his car got light over the brow exiting Turn 7. That left the remaining five cars just four minutes to set a fast lap.

Taylor was the first to duck under the 75sec barrier with a 1min14.4, and then improved to 1min14.278sec. That left most of his rivals gasping although Fred Makowiecki in the #911 Porsche drew within 0.056sec of the #3 Corvette C8.R.

“It was a stressful session," said Taylor. "Everyone was kind of waiting and knowing that it was only going to take a couple of laps to maximize the tires and then you have a small drop-off.

"We waited one or two minutes and then the red flag came out on our first timed laps. It was very poor timing for us. The #4 car had put in a quick lap; putting a heat cycle in a tire like that can take a knock on the performance. No one knew what they had going back out.

"Our Corvette performed really well. We haven’t done much light-fuel running; most of it has been race prep. So it really came alive. It’s been good all weekend no matter if it’s dry or wet, so whatever the weather brings tonight, we should be alright.”

The BMW M8s of Bruno Spengler and Jesse Krohn were a somewhat disappointing half a second down on Taylor, while Oliver Gavin in the #4 Corvette was 0.789sec from top spot.

Aaron Telitz took GT Daytona honors despite his AIM Vasser Sullivan Lexus RC F brushing the wall of the oval on his final flyer. That effort got him down to a 1min17.954sec, although his previous two laps had also been good enough for pole.

His closest competitor was Robby Foley who was, as usual, highly impressive in the Turner Motorsport BMW M6, 0.123sec from top spot.

Misha Goikhberg caused a brief red flag when he spun the #57 Meyer Shank Racing Acura NSX after clipping the wall at the same place that Vanthoor had, which cost him the rest of the session and his two fastest laps.

Ryan Hardwick in the Wright Motorsports Porsche 911 GT3 R failed to respond to the red flag so was ordered to sit out the remainder of the session. That allowed Matt McMurry in the second MSR Acura NSX to vault him into third, and Jeff Kingsley’s McLaren 720S into fourth. However, the Compass Racing was investigated for tipping the Team Hardpoint Audi R8 of Rob Ferriol into a spin on his final flyer.

Hardwick retained fifth ahead of Gar Robinson’s Riley Mercedes AMG GT3, with Till Bechtolsheimer seventh in Gradient Racing’s Acura seventh. That car had been repaired following his co-driver Marc Miller’s accident in FP2 this morning.